Mark Cerny, lead system architect for both the PlayStation 4 and 5 has delivered a presentation about Sony's next generation games console. Like with the Xbox Series X reveal at the start of the week, ahead of the presentation Digital Foundry, part of Eurogamer, was provided detailed information on the upcoming console hardware and a pre-recorded copy of the presentation material.

One of the immediate questions many of you will have is about the Sony PS5's hardware specs and how they compare against its very recently revealed Microsoft Xbox Series X rival. I've compiled a comparison table below, trying to compare like with like as closely as is possible.

The architecture of the PS5 is heavily dependent on a custom AMD APU, just like the new Xbox, however Sony's specs seem to fall a bit short of Microsoft's new hope in a couple of departments. In a particular insight into the decision making here, Cerny argued that faster RDNA 2 GPUs with fewer CUs deliver favourable performance for the system's target market as all the other GPU components can run much faster too. The PS5 will ably cope with cutting edge modern graphics with raytracing effects like reflections, ambient occlusion, shadows and global illumination, asserted Cerny. The system will aim to run games in 4K at up to 120fps. Also it is worth noting that the new system should be able to run nearly all of the PS4 games library without a hitch.

Most clearly in the Sony hardware's favour, at this stage, it seems to have looked more closely at the storage subsystem and you can see in the table above that it uses a so-called 'custom design' SSD, rather than an off the shelf PC component. Furthermore, the SSD communicates with the custom processor via extra hardware and software forming the custom I/O unit. The built-in storage can load 2GB of data into the console's memory in a quarter of a second, which is basically 'instant loading' according to Sony. As you can see in the above table, Sony's claimed 5.5GB/s transfer rates for raw data are greater than twice as fast as transfers within the Xbox Series X. 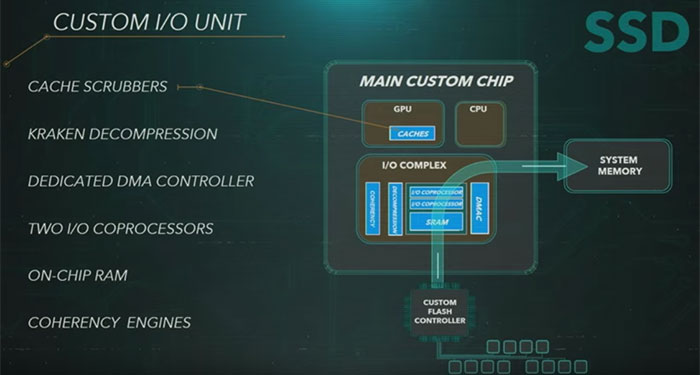 Another aspect of console design Sony seemed to concentrate on more than Microsoft was audio. Cerny revealed that the PS5 would use the Tempest Engine for audio processing. This processor is "effectively a re-engineered AMD GPU compute unit, stripped of its caches and relying solely on DMA transfers - just like a PS3 SPU," clarifies Digital Foundry. It is roughly about as powerful as "all eight Jaguar cores in the PS4 combined," boasted Cerny.

All in all it was a decently revealing presentation. It would be interesting to see Sony follow in Microsoft's footsteps to reveal the form of the new console and any new controller it has designed but it is still playing its cards close to its chest about consumer facing aspects of design such as this.

Both Sony and Microsoft aim to release their next gen console in the run up to Xmas this year.

ik9000
plan to launch later this year into a ruined economy and people impoverished by CV fallout and brexit. Yeah, good luck with that given how much they will need to charge for that spec level!

Should be cheaper than the XBox no?
Posted by CAT-THE-FIFTH - Wed 18 Mar 2020 21:19
Cheaper than higher end PC graphics cards,or just trying to build a PC with similar specs. Just to get a RX5700XT and a Ryzen 7 3700X will set you back nearly £600,and neither are considered high end anymore. The XBox graphics card is probably closer to a RTX2080 or RTX2080 Super,so probably around £500 to £600 just for that alone.

A report via DigiTimes paints a bleak image on shipments for motherboards and GPUs. According to the publication, citing sources close to motherboard makers, the initial impact of the outbreak severely affected production - and the entire supply chain ecosystem needed to ferry these across the world. Alongside reduced demand in China (reported to be down 50% YoY and unlikely to pick up until July at the earliest) and other countries, the stage is set for a record low in some of our most favored hardware pieces.

Market observers had expected a seasonal increase in demand entering Q3 2020 which may never come to fruition, as DigiTimes also mentions AMD, Intel and NVIDIA as being unlikely to achieve their target sales for this time period. The reduced demand could see prices come down on components and various hardware pieces, should it linger for longer than the fabrication bottlenecks factories are currently facing. Some publications are pointing towards this drop in demand as a reason for NVIDIA to delay their expected GTC announcements, which the company's CEO, Jensen Huang, has already come out saying “Could wait”.

Posted by Gentle Viking - Wed 18 Mar 2020 21:37
If they sell these consoles dirt cheap, then us PC gamers will be the laughing stock of the gaming world.

CUZ the way i see it, putting together a gaming PC just at the same level as one of these boxes will be at least 2 X of the listed price in Denmark ( 880 GBP )
So even at that price listed here and those specs it seen a deal almost too good to be true and if it hold to a large degree i will personally feel a bit stupid with all the money i have poured into my computer.
And putting a top of the line gaming PC together,,,,,,,, well you would be down right stupid, CUZ the price of one of those dwarf the listed price for the new consoles and a similar SPEC gaming PC.
https://www.proshop.dk/Spillekonsol/Sony-PlayStation-5/2831713?cid=bfd48ff7-1670-4d6e-9217-ccb43b4d4b42
Posted by LSG501 - Wed 18 Mar 2020 22:15

Gentle Viking;4185359
If they sell these consoles dirt cheap, then us PC gamers will be the laughing stock of the gaming world.

While I doubt it will be dirt cheap I wouldn't be shocked if MS/Sony sell at ‘cost’ (remember we're basing cost on retail, not component level) and treat it like a loss leader.
It wouldn't be the first time that either have taken a loss on the console and ‘recouped’ losses on game sales etc either.

In a lot of area's the actual cost to produce an item is around a quarter of the retail value and the retail cost is made up of things like each company having their own mark up. A gpu for example has nvidia, the manufacturer, the board partner and the store all wanting to make their own bit of profit. In the case of these consoles, MS/Sony are basically skipping out the board partner and store in regards the cost of components.

CAT-THE-FIFTH
Cheaper than higher end PC graphics cards,or just trying to build a PC with similar specs. Just to get a RX5700XT and a Ryzen 7 3700X will set you back nearly £600,and neither are considered high end anymore. The XBox graphics card is probably closer to a RTX2080 or RTX2080 Super,so probably around £500 to £600 just for that alone.

Bearing in mind this is ‘next gen gpu’ I'd argue the gpu would fall at the current 2060 range in terms of pricing (assuming no ‘price gouging’ from coronavirus shortages), although obviously taking into account my above comments about retail price versus the price MS/Sony are likely paying.