As expected, Samsung has taken the wraps off an attractive new Galaxy smartphone. The new Samsung Galaxy S20 Fan Edition is now official, and those interested can pre-order for delivery starting Friday, 2nd October. To get the 'FE' version of the Galaxy S20's price down Samsung has sliced the specs in a number of ways. On first inspection the most significant downgrades are in; build materials, screen, and RAM - but nothing too drastic. The main beneficiary of the spec shears is the price with the Galaxy S20 FE available from $599/£599 for the 4G LTE version. 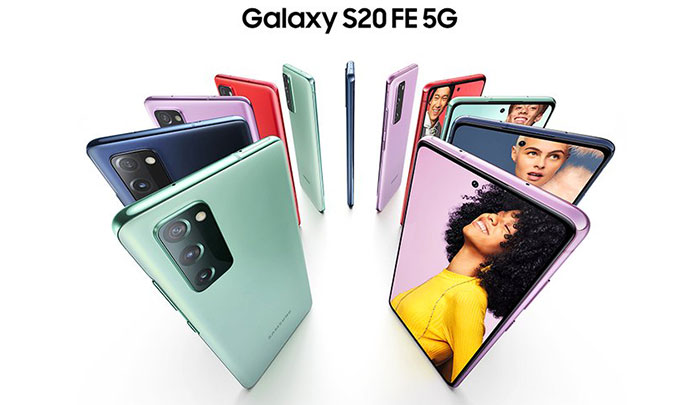 Samsung already made three Galaxy S20 variants; the regular, Plus and Ultra models. With this Galaxy S generation it didn't make an economy or 'e' model, so perhaps that is where the 'FE' steps in. In terms of size the S20 FE is built around a 6.5-inch display so it sits snugly in this respect between the regular S20 and the Plus model. Like those phones the S20 FE has a Super AMOLED Infinity-O screen, however in this case it is flat, and limited to FHD+ (1080×2400 pixels). Users can choose to run this screen at 60 or 120Hz. If you remember the flagship S20 devices had to scale back from QHD to FHD to run at 120Hz but that doesn't apply here. The screen offers a 240Hz touch sampling rate too. Samsung's under screen fingerprint scanner is an optical rather than ultrasonic component.

Inside the Galaxy S20 FE is a 7nm 64-bit Octa-Core Processor running at up to 2.8GHz. The 4G LTE model uses a Samsung Exynos 990 chip, but if you plump for the 5G model (and extra $/£100) you will get a Qualcomm Snapdragon 865 (globally). Other key internal specs are the 6GB of RAM and 128GB storage, with microSD option, and a 4500mAh battery. Other key specs of the phone are the stereo speakers supporting Dolby Atmos, there's IP68 water and dust protection, and up to 25W wired charging. No 3.5mm headphone jack is present. 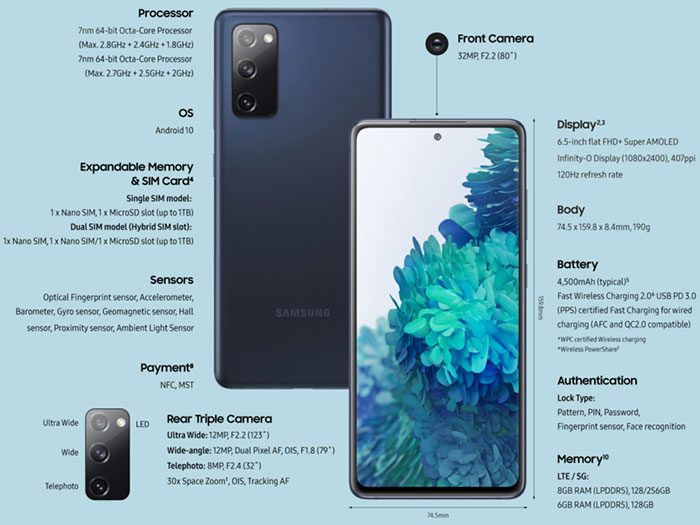 Samsung keeps the same 12MP main camera as on the more expensive Galaxy S20 line. This camera features 1.8µm pixels, f/1.8 and optical image stabilisation. Accompanying this are a 12MP ultra-wide camera and an 8MP 3x optical zoom lens equipped camera. You can utilise Samsung Space Zoom for up to 30x magnification. The selfie cam in the Infinity-O cutout is a 32MP unit.

Last but not least it is worth a look at the build quality and materials. The Galaxy S20 FE uses Gorilla Glass 3 on the front and the back is matte 'glasstic'. Nicely, the chassis still has a steel frame. For wider appeal Samsung is producing the S20 FE in "six vibrant colours" which are; Cloud Red, Cloud Orange, Cloud Lavender, Cloud Mint, Cloud Navy and Cloud White.

Xlucine
Ooh, samsung with snapdragon for sale in the UK. I'm kind of tempted by the 4g one, it seems decent for the price - shame about the holepunch

cheesemp
Careful - if you want snapdragon you want the 5g - From the article:
The 4G LTE model uses a Samsung Exynos 990 chip, but if you plump for the 5G model (and extra $/£100) you will get a Qualcomm Snapdragon 865 (globally).

I noticed that - I feel a lot better about getting exynos in this one as it's not trying to hide behind reviews of the snapdragon one for the same price!