We witnessed a pretty extensive leak of the Samsung Galaxy Note10 Lite in mid-December, and now it is official, alongside the Galaxy S10 Lite. The premise is quite well trodden previously; get a flagship design, lop off some premium features, and offer it at a more accessible price. At CES 2020 Samsung has revealed details and full(ish) specs of its appealing new Galaxy Lite duo, however it hasn't shared the availability and pricing as yet - making it difficult to weigh up the value. 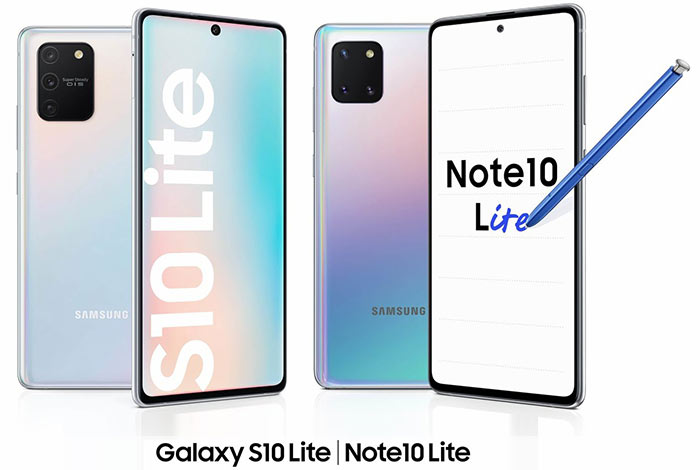 With its new Galaxy S10 Lite and Note10 Lite, Samsung says it will "bring key premium features such as the latest camera technology, signature S Pen, immersive display and a long-lasting battery at an accessible price point". Looking over the designs they are appealing to me as they offer flat displays rather than the wraparound style offered by the flagships, and Samsung has boosted battery life with both devices coming with 4,500mAh battery and super-fast charging capabilities.

On the surface, and placed side by side the devices look very similar, and both are based around a 6.7-inch Full HD+ Super AMOLED Infinity-O display. Elsewhere in the specs, the devices seem to share the same processor, storage, RAM options, and battery as noted previously.

Those familiar with the Note range will be well aware of this device's built in stylus, which is, with the supplied software integration, a key differentiator. Samsung hasn't used the same stylus as on the previous Note10 models here, as it lacks a gyroscope so can't be used for Air Actions, but previous gen upgraders might not notice / care about this feature set missing. 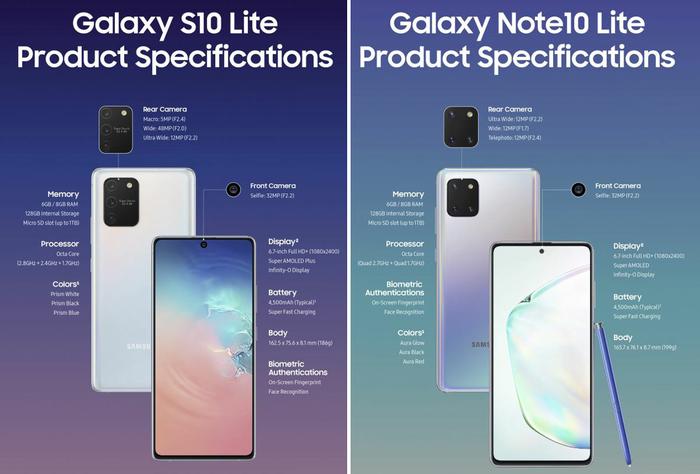 Further significant changes come in the rear camera array configuration but both feature the same selfie camera in that pinhole (32MP F2.2). The S10 Lite offers a wide angle 48MP camera with OIS, Ultra Wide 12MP, and a Macro 5MP camera. Samsung's Galaxy Note10 Lite boasts a trio of 12MP cameras round the back with Ultra Wide, Wide and Telephoto lens choices. The two longer focal lengths are steadies by OIS technology. 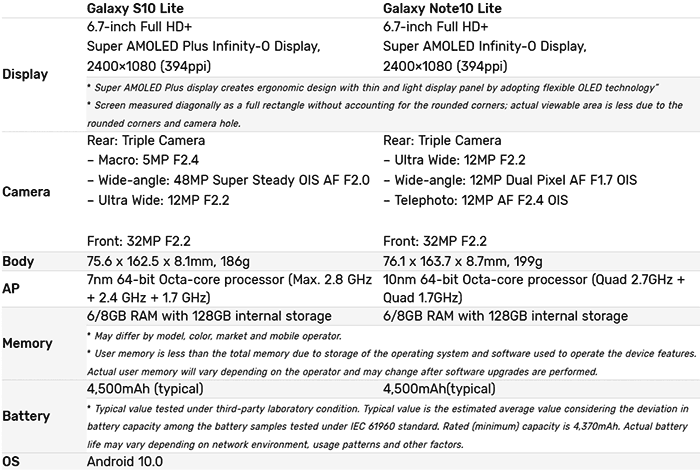 Reports from the show floor indicate that the demo samples of the Samsung Galaxy S10 Lite and Note10 Lite offer different processors; Qualcomm Snapdragon 855 and Samsung Exynos 9810, respectively. However such specs seem to vary by region and this might indicate that the Note10 Lite isn't going to be marketed in North America.

Last but not least, another attraction of the Galaxy Note10 Lite is its 3.5mm headphone jack on the bottom edge alongside the USB-C port, bottom speaker and stylus silo. If dual-SIM variants are forthcoming the 'accessibly priced' Note10 Lite is definitely going on my wish list for when its successor launches.

Posted by Tabbykatze - Mon 06 Jan 2020 10:58
Those camera arrays look horrible…
Posted by philehidiot - Mon 06 Jan 2020 14:32
I'm rather interested, I just don't like that they haven't even given an estimated price or a price bracket. This isn't a flagship which is supposed to just be the best, it's a notch down and so the value proposition is essential.
Posted by Jonj1611 - Mon 06 Jan 2020 14:41
I quite like it but as has been said would like to see a price
Posted by TomRHooper - Mon 06 Jan 2020 16:35
I could understand a cheaper Note, but the S10 Lite seems like a really strange move given that the S11 announcement is just weeks away. Especially considering the kind of pricing and promotions we're seeing on the regular ol' S10 at this stage in its product cycle. If this had happened 6 months ago I'd have assumed they were just testing the waters with new screens and other parts in anticipation of the S11 launch (just like when they randomly released the Galaxy Alpha to test the new Exynos chips and metal frame prior to launching the S6).
Posted by big_hairy_rob - Mon 06 Jan 2020 18:33
Price first, specs after - price immediately determines whether I should bother reading further.