Running the synthetic CrystalDiskMark tests bears out WD's claims on sequential transfers. 3,071MB/s read and 2,684MB/s write is, on the face of it, rather speedy. 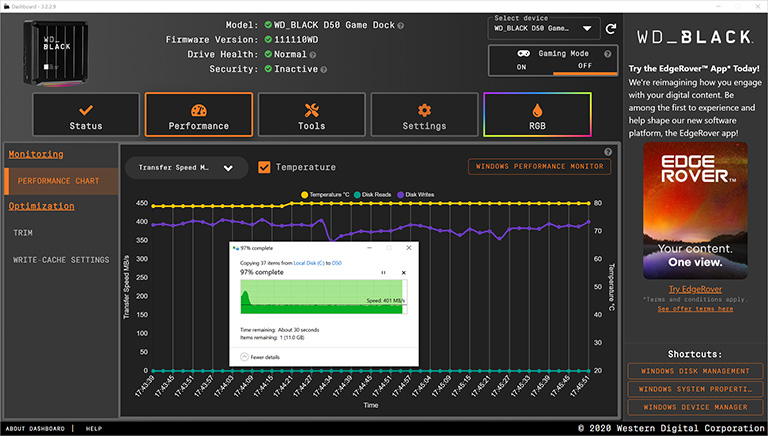 However, real-world use doesn't correlate well with those snapshot results. Moving a 400GB folder containing 37 files over from the host computer's Corsair MP600 PCIe 4.0 x4 drive over to the D50 Dock produces interesting results. The transfers initially peak at 1.2GB/s for around 30 seconds and then fall to a steady state 400MB/s for the remaining time, which is consistent over multiple runs and reboots. At this pace it would take around 40 minutes to fill the drive. It's most likely a case of the SN730 drive getting saturated very quickly, rather than thermally-induced throttling that occurs at 85°C. Performance doesn't alter when Game Mode is toggled on, either.

Reading the same files from the D50 and writing them back to the MP600 increases transfer rates to an average 992MB/s, albeit with plenty of peaks and troughs. We know the connection bandwidth is solid as reading and writing to a SanDisk Extreme Portable SSD attached to the Dock's Type-C port results in smoother, consistent transfers.

Likewise, simple testing of the other capabilities confirms real-world 106MB/s transfers for the networking, meaning the unit acts like a well-tuned pass-through for both the Gigabit Ethernet and USB Type-C ports, but is it wrong to want 2.5GbE at this price point?

WD attempts to kill two birds with a single stone by pairing the qualities of a Thunderbolt dock with the speed and capacity emanating from fast SSD storage. The D50 Game Dock does well enough on the first count as the additional outputs make a lot of sense for users with limited ports on, say, a Thunderbolt-toting Ultrabook. Five USB ports, multiple display outputs, Gigabit Ethernet, and ability to charge many modern laptops are all good points for the £280 barebone unit.

Integrating either a 1TB or 2TB SN730 drive inflates the cost significantly but doesn't provide the real-world transfer speeds indicated in the specifications. Running rather toasty at 80°C and offering around 400MB/s long-term speed, it's arguably more prudent to purchase a dedicated dock and fast portable external storage serving the same purpose with greater flexibility.

Bottom line: the WD_Black D50 Game Dock is an alluring prospect on paper, but in-use speed limitations and a high price take the lustre off what could have been a brilliant product. 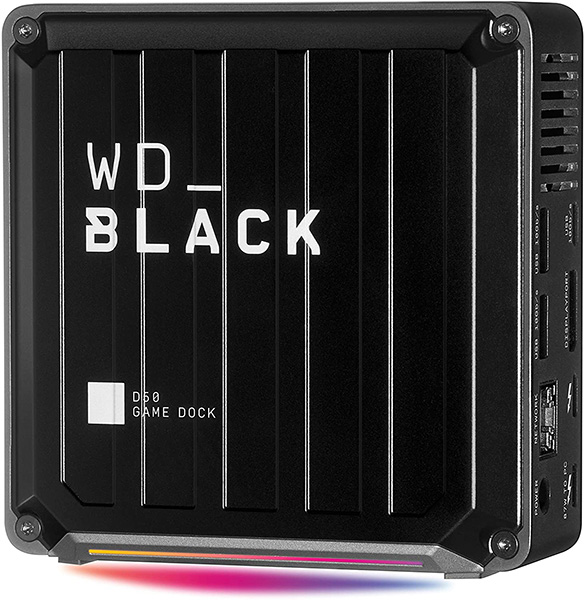 Defintly very expensive, these caddies should be alot cheaper concidering competition.
Posted by n1cks - Thu 20 May 2021 10:48
Are the speed limitations of the dock specific to the SN730 drive itself? I managed to get the 2TB version for £310 from Amazon.es. Given it seems fairly easy to open up I'm minded to keep it and upgrade the SSD in future if that will solve any saturation issues. Seems to work quite nicely running a VM and games and overall it works well with my laptop and I like the convenience of the ports.