Turns out my own home is the perfect place to demonstrate the real-world usefulness of a mesh network. Fibre broadband enters the house at the front of the three-storey property, naturally leading to dead/weak spots to the rear/garden, and on the top floor. Helping alleviate such issues, the Orbi system has been installed with the router on the ground floor and the satellite positioned centrally on the first floor.

Three testing locations are chosen. Office, at the front of the house on the first floor (roughly 5m above the router), Dining Room, at the back of the property on the ground floor (roughly 10m from router), and a Bedroom on the top floor (roughly 15m from router). To test wireless performance at each location, we're using iperf3 to gauge throughput between server and client. The server is a desktop PC connected to the router via Gigabit Ethernet, the client is a desktop PC connected to the network via a Killer Wi-Fi 6 AX1650 PCIe Card.

Even at close range, the Orbi WiFi 6 AX6000 delivers a speed increase of up to 45 per cent over a three-year-old Synology RT2600ac router. The numbers we're seeing are close to the limit of the Gigabit Ethernet client, yet in close proximity the benefit of the mesh system hardly warrants a £700 outlay; the £200 Synology router is by no means slow.

Of course, it is at greater distance that mesh solutions truly prove their worth. The dining room, at the far side of the house, is notoriously difficult, with slow speeds and occasional dropouts when attached to the Synology router. With the Orbi system installed, the client automatically connects to the satellite node on the first floor via the 5GHz band, resulting in a fast, solid connection.

How many nodes do you need? That will depend on property layout and construction, but with the Orbi satellite placed in the middle of the house, coverage is improved throughout. Even the top-floor bedroom, which a solitary router struggles to serve, is blanketed with high-speed Wi-Fi. Do note, however, that mesh systems aren't typically backward compatible, meaning users with older RBS50 nodes can't include them in the RBK852 configuration, and at the time of writing, there's no option to purchase individual AX6000 units.

As expected given the price gulf between the two routers, the Orbi system delivers a transformative whole-home wireless experience, though at £700 it remains a luxury purchase. We're curious to know how a budget mesh solution would compare and will be looking to test a mainstream alternative in the near future.

The prevalence of mesh networking solutions coincides with the increasing number of wireless devices in the modern home. Blanket coverage has become a necessity for many, and with traditional routers unable to deliver, mesh systems serve as a sensible and easy-to-deploy upgrade for those wanting to eliminate any dead spots.

At the very top end of the scale, Netgear's Orbi WiFi 6 System AX6000 offers excellent whole-home coverage and fast Wi-Fi 6 performance, albeit at a hefty premium. £700 represents a significant hurdle, particularly when you factor in the relatively basic software and lack of common features such as USB storage, but if you're willing to spend big, the Orbi Wi-Fi 6 system delivers on its primary promise. It is the fastest, most expansive wireless system we've ever experienced. 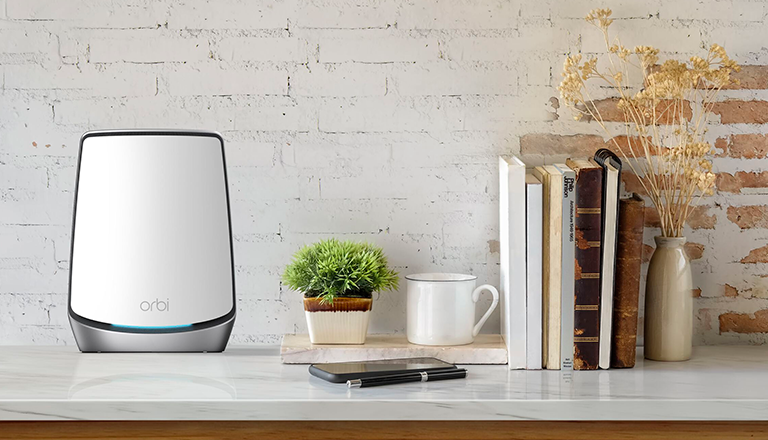 The Netgear Orbi WiFi 6 System is available to purchase from Scan Computers.

Arc007
Have they finally fixed the wired backhaul ? Got the RBS50 based system and anytime the power goes off to one of them it reverts back to wireless backhaul and slows everything down.

Thats a poor bug, but I need these to work without a wired backhaul as living in rented accommodation.
Posted by Saracen999 - Thu 03 Sep 2020 22:24
An apparently High end performance for an undoubtedly high end price.

QuorTek
Stilll will stick with cables.. someone change my mind?

Not me, i am all cable too, wifi are the fentanyl of the internet, only to be replaced by 5G