You are here:
Monitors Hardware Reviews

A promising foundation and a mammoth upgrade for gamers wanting to take their screen size up a notch or two...

The Philips Momentum 558M1RY is a giant monitor unlike anything we've tested before. Designed ostensibly for game consoles, the 55in VA panel is in many ways a TV replacement for gaming enthusiasts who don't need a built-in tuner and favour the low input lag typically associated with monitors.

An interesting prospect, and Philips has a handful of features that heighten the panel's appeal. These include a 4K UHD resolution, HDR1000 certification, and either FreeSync or G-Sync Compatibility at up to 120Hz. Such ingredients make for a vivid HDR gaming experience, while the sleek external design and impressive B&W soundbar enhance the overall package.

A promising foundation and a mammoth upgrade for gamers wanting to take their screen size up a notch or two, however there are limitations to be aware of. Philips' VA panel isn't well suited to regular desktop use, games consoles connected via HDMI will be limited to 60Hz at the native 4K resolution, and then there's the fact that 55in 4K OLED TVs are available for similar money.

Bottom line: Philips hasn't quite cracked the living-room monitor just yet, but we come away feeling as though the Momentum 558M1RY offers a taste of things to come. A follow-up model, with HDMI 2.1, could be a noteworthy companion for a next-generation games console. 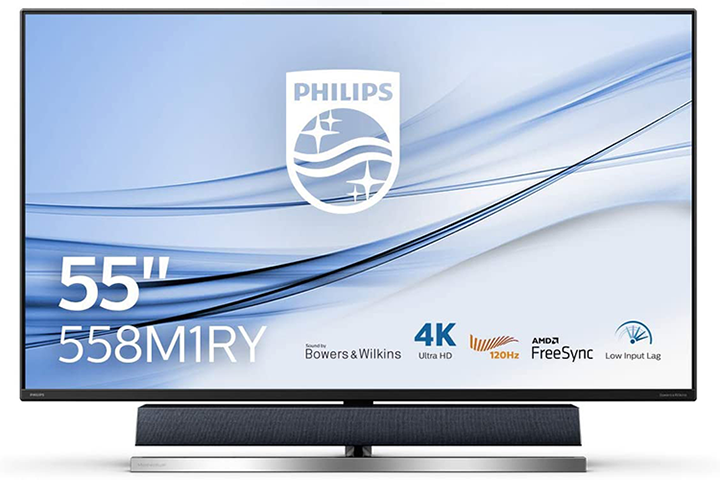 The Philips Momentum 558M1RY gaming monitor is available to purchase from Scan Computers.

You aren't getting a current gen LG OLED for £1200 though.
Posted by edmundhonda - Tue 11 Aug 2020 14:50
LG OLED also doesn't have a DP connection, so you're limited on quality until someone launches a GPU with HDMI 2.1.
Posted by BigBANGerZ - Tue 11 Aug 2020 15:25
“Not ideal for regular desktop use”
not unless ur King Arthur with an unusually large desk

what seems interesting though is a VA panel capable of 4k 120Hz but you can't interface with it via HDMI 2.1 in other words other VA panels must be coming but this monitor/TV seems a strange choice
Posted by Myss_tree - Tue 11 Aug 2020 18:10
Would this be better / worse than a television if it was used for dvd / blu ray or streaming too?