Philips has launched an attractive SuperWide 49-inch monitor. The new Philips 498P9Z is described as being "like two full-size high performance monitors in-one" and offers some interesting specs at its proposed £899 price point. It is essentially a fast refresh (165Hz) gaming version of the Philips 498P9 (70Hz max) which was released a year ago and retails for about £749. 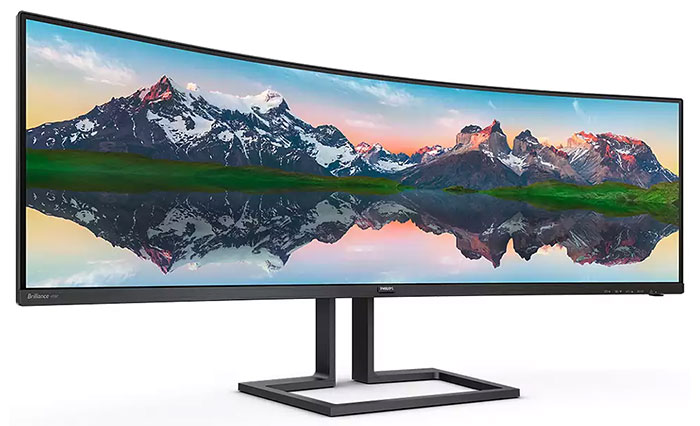 The new Philips 498P9Z uses a VA panel with DisplayHDR 400 certification. The 5120 x 1440 pixels resolution in a 32:9 screen ratio 49-inch diagonal is equivalent to having twin 27-inch QHD monitors side by side – but in a seamless fashion. Its 1800R screen curvature promoted the perception of immersion for those creating or gaming on this monitor.

As I pointed out in the intro, the new 498P9Z pushes the boat out in gaming specs, compared with its older brother. Philips claims that the new 48-165Hz screen with Adaptive Sync will deliver "fluid, artefact-free performance at virtually any frame rate," as well as "ultra-fast response times". The quoted response time is 4ms GtG.

Colour reproduction and similar stats looks good, with this wide viewing angle display boasting DCI-P3 91 per cent, NTSC 100 per cent, sRGB 122 per cent, and Adobe RGB 89 per cent, with a Delta E <2. The max brightness of this display is 550 nits, and the contrast ratio is 3000:1. Various screen modes/corrections are on offer including; SmartImage enhancement, PBP 'MultiView' mode, Reading mode, Flicker Free, and LowBlue modes.