...Philips provides a vivid image that is primed for gaming on consoles such as the Xbox One X.

A super-sized monitor designed to displace the traditional TV may seem a niche solution, yet it's also a sign of how viewing habits in general are changing.

Live TV is no longer a requirement for many users, and if you're seeking a panel with superior gaming credentials, a monitor may have the upper hand by foregoing the image processing employed by TVs in favour of fast response, reduced lag and FreeSync adaptive framerate synchronisation.

It is most likely that line of thinking that has resulted in the intriguing Philips Momentum 436M6VBPAB. The giant 43in screen is a 4K monitor at its core, but by adding to the mix convincing HDR credentials, fast response, a wide colour gamut and FreeSync support, Philips provides a vivid image that is primed for gaming on consoles such as the Xbox One X.

Having one panel to replace both a TV and a monitor is a good idea in theory, but such a solution needs to excel on both fronts, and the Philips is ultimately better from afar. Up close, as a PC monitor, the huge size can prove uncomfortable, uniformity isn't perfect, and the subpixel layout becomes noticeable. Step back, and the outstanding contrast, excellent colour accuracy and minimal lag make for a compelling gaming environment.

Bottom line: the PC experience isn't ideal, yet if you're seeking a large panel for occasional work and frequent console gaming, the Momentum 436M6VBPAB is, at the very least, an interesting choice. 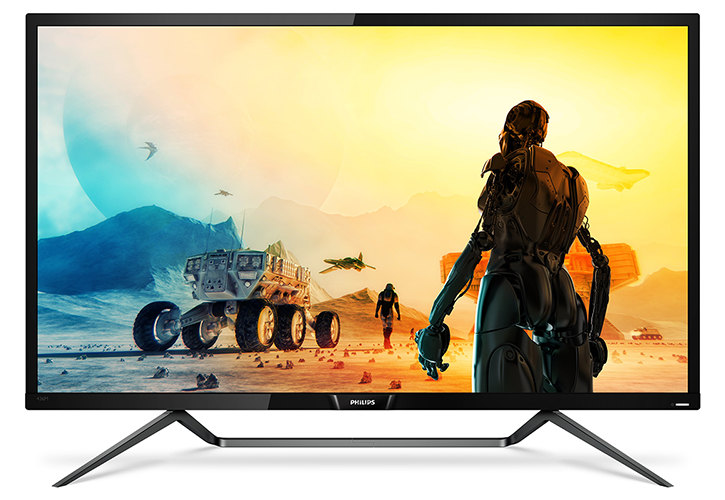 The Philips Momentum 436M6VBPAB monitor is available to purchase from Amazon.

GinoLatino
It was all nice and well, until I reached the Power Consumption page…!

The test methodology isn't perfect. It measures power consumption at 50% brightness - but that may not be the same level of brightness across all the monitors. If the backlight on the Philips is (say) twice the power of another, then the power consumption will be double at a 50% setting, but the display might be considerably brighter, so in real life you may be running it at a lower percentage setting and therefore a lower power consumption.

A better test would be to compare the monitors at the same light output (lumens) rather than a completely uncalibrated percentage setting.
Posted by tinbin - Wed 10 Oct 2018 10:12
ouch power consumption was I reading it right 150watt max
Posted by tweake628 - Wed 10 Oct 2018 17:45
1 HDMI input are they nuts ……..for that kinda cash I dont want to be unplugging and swapping between ps4pro xbox one x .come on !!
Posted by Tunnah - Wed 10 Oct 2018 20:07
As someone who uses a HDR 4K TV for PC usage, I should note that the way to go about HDR is simply to leave it off, and leave it to apps to enable it. For videos, install MadVR over MPC-HC and tell it to pass through HDR info, upon playing HDR content your screen automatically turns both it and the right colour space on (bt2020 in most cases). Games usually have their own exclusive fullscreen mode which will enable HDR without having to turn it on in Windows.

I've been using a TV as a monitor for years now, as I got used to the size (currently at 43"), and while the sharpness isn't as great as a PC, you soon get used to it. After all, you don't have anything to compare it to, so it becomes the norm extremely quickly