Doubling the cores and threads leads to predictably gargantuan performance that puts AMD in a different HEDT league to Intel.

First-generation Threadripper, built on the solid foundation of the Zen architecture, moved AMD's consumer CPU performance into a league that it hadn't occupied for a very long time.

The original review opined that 'Threadripper shines most brightly in benchmarks that take advantage of its muscular, many-core design. Digital content creators need to sit up and take notice, because AMD brings true premium workstation-class performance, massive I/O and all, to the desktop.'

Such evaluation is certainly more keenly applicable to the Threadripper 2990WX - a 32-core, 64-thread chip that's a drop-in upgrade over the 1950X. Doubling the cores and threads leads to predictably gargantuan performance that puts AMD in a different HEDT league to Intel. The difference between this $1,799 chip and Intel's $1,999 Core i9-7980XE can be as much as 70 per cent in AMD's favour.

Obtaining blistering performance is laced with a few provisos, however. Applications need to be able to harness the raw horsepower on tap - some multi-core benchmarks only scale well to 16-18 cores - so there needs to be software-side optimisations in certain cases. The good news is that workstation-class apps do tend to scale well, evidenced by our CPU-centric benchmark results, meaning a Threadripper 2-equipped system ought to fly.

Yet for all the bombast about multi-core domination, fully deserved though it is, the Threadripper WX isn't all things to all people. The key characteristic that makes it so great in core-scaling benchmarks is its Achilles' heel for, say, gaming, where titles just don't know what to do with 64 threads. Out-of-the-box performance is crippled at 1080p, to the point of being unplayable in some games, though AMD ameliorates the problem by having a Game Mode activated via a reboot. It's certainly far from being an elegant solution, but for the foreseeable future, there is no way around this: it will be interesting to see how, if Intel introduces a desktop 28-core processor, it gets around the same issue.

When the dust settles on the 2nd Gen Threadripper WX launch we feel the general consensus will be that AMD has created a truly monster HEDT CPU that brings colossal, never-before-seen performance into the workstation space. Its true impact will be felt by those content creators whose projects takes hours to render on older hardware. But it's not a gaming CPU. For that, you will probably need to dial it down to an X-series Threadripper, and we'll have the 2950X's review soon.

Bottom line: The AMD Threadripper 2990WX is a niche processor that's in a multi-core league of its own. Feed it well with optimised software and it has no performance peer. For everyone that can't take full and utter advantage of 64 threads, the X-series may well be the better bet. 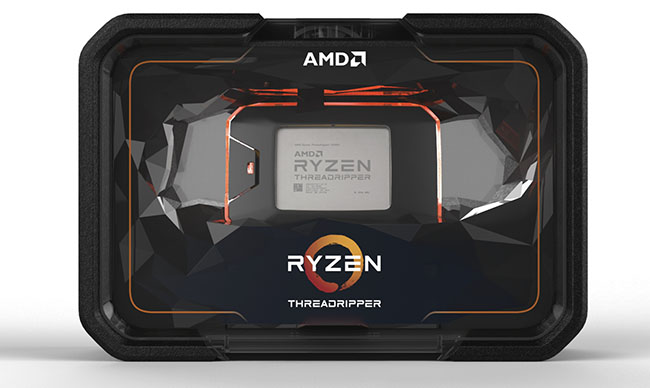 The AMD Ryzen Threadripper 2990WX processor is available to purchase from Scan Computers.

I might be out of touch, but who is spending close to £2K on the CPU alone to then play games? I can see the point in these CPUs for people doing heavy multi-threaded processing (unless it's handbrake, natch), but for those who do gaming and work, I find the game-mode very off-putting.

My understanding is the last gen threadrippers had to be put into game mode too to get good framerates and this was to do with infinity frabric and the multiple cores being essentially standalone chips in a single package; where the Intel chips don't suffer from this as they are single processors.

The comparison I want to see is the entry level of the HEDT chips, as this is where people who want decent PCIe lane counts and what not have to buy in at. I'm willing to pay (a small amount) more to Intel for not having to use Gaming Mode and lower energy costs. I think Intel are probably aware of this too - the question can they make their price attractive enough to have their arguably more elegant solution come up with the very effective blunt object that is Threadripper.

Either way, I'm lagging behind on a measly 6/12C Haswell-E at the moment, which turns four this year. I haven't even looked at over clocking it yet, and I can't see a need to switch CPUs next year either, which at fives years I would normally do.
Posted by Corky34 - Mon 13 Aug 2018 16:27
It seems the WX's leans more towards the professional, content creating, and workstation end of the HEDT market than the gaming end, by all accounts the X parts are more balanced towards the gaming end.

I tried looking for 32 core Xeon gaming benchmarks so as to draw some comparison but either my Google-fu is letting me down or no ones ever ran gaming benchmarks on high core count Xeons. :help:
Posted by lilyx - Mon 13 Aug 2018 16:32
AMDs live launch thingy has just started for the 2990WX on twitch. Am I allowed to post the link?
Posted by CAT-THE-FIFTH - Mon 13 Aug 2018 16:33
The 2990WX hits two issues - it seems that many applications under Windows can get utterly befuddled by 64 threads(run over 4 separate chips),plus running 4 Ryzen chips off only a pair of memory controllers seems to not help either. Linux benchmarks seem a bit better in that regard though,if you check them in the review thread:

However,for the most part the 2950X seems to make more sense unless you need lots of cores.
Posted by badass - Mon 13 Aug 2018 16:40
What I don't understand is why Game mode is 8 core 16 thread? IIRC There are four 8 core CCX's in the package. Two of the CCX's have a dual channel memory controller.

Why not have game mode disable the 2 CCX's with no memory controllers and disable hyperthreading so each core has double the L1, L2 and L3 cache? Same 16 threads as well.

Even better, can this be fixed by setting processor affinity for games? If so, then no reboot required.