Dell has shown what it believes to be "the future of workplace productivity," at the recent Dell World conference in Austin, Texas. The future workplace is ruled by 5K monitors and touchable desks according to Dell's R&D scientists. While Dell proudly says that it "often leaps ahead of the curve to provide customers with the next big thing," neither squashing more pixels into a display nor its smart desk are particularly cutting edge concepts. Actually HP beat Dell to the Smart Desk punch with a very similar concept a week previously, the HP Sprout, designed as a perfect system to pair with its upcoming Multi Jet Fusion 3D printer. Described in the most basic terms, the Dell Smart Desk pairs a horizontal touch screen work surface with a vertical display. Users interact comfortably and naturally using touch, gestures and a high performance pen to manipulate digital content on the desk screen. This is a system aimed at professionals and "digital artists, engineers, architects, and scientific analysts" in particular. The smart desk runs applications that makes use of both screens thanks to plug-ins providing key Independent Software Vendor application support. With seeing and doing separated like this Dell says that it has implemented a system where "primary work activities are close to the user while secondary ones are further away". There is also a cloud and collaboration aspect built into these systems. Dell describes how when clustered together its Smart Desks can share content on the project at hand and also pick up and continue work projects upon any other smart desk in any location. While these HP and Dell smart desk concepts do look enticing perhaps some systems designers could go down a cheaper route - to use the tablet computers most people already own as the horizontal desktop part of the twin-screened systems.

LeetyMcLeet
This reminds me of something MS did in the mid 00's, that massive touch table which they sorta scrapped and replaced with pixel sense or something? All we need now is some kind of hologram between the desk part and the display :D

The Microsoft table display is alive and kicking - check out Hawaii Five-O on Sky on Sunday nights. 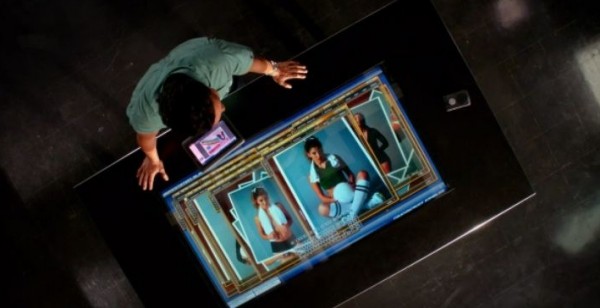 freedomzero
It better has some tea and coffee resistance :)

From what I've read the Dell design is an active surface (display elements in the horizontal bit) so that'd be more vulnerable than the Sprout (which projects it's horizontal display from overhead).

Nice to see something new coming out from the major vendors - although the Sprout has more “cool” factor in my books.

Disclaimer: I work for HP, but not the division doing the products mentioned
Posted by Corky34 - Thu 06 Nov 2014 11:54
Would love to see something like this with haptic feedback, if we are to use these screens for manipulating things, using a virtual keyboard and the like, it would work much better if it gave tactile feedback to the user.
Posted by scaryjim - Thu 06 Nov 2014 11:58

crossy
… the Sprout … projects it's horizontal display from overhead …

a few years back there was a mock-up no-screen tablet that used a kinect-like sensor (perhaps a LeapMotion?) and a mini projector to turn any surface into a tablet PC. I can see a desktop peripheral like that being a nice addition to any PC, but then nothing seemed to happen with it (and that differs from Sprout, which uses a touch mat rather than finger tracking). The option to turn part of my ordinary desk into an interactive touch peripheral for my PC? Yeah, I'd go for that :)