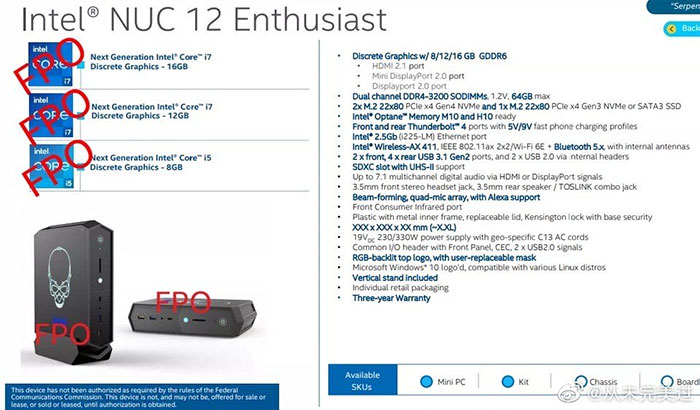 Whereas the NUC 11 Extreme mixes Intel Rocket Lake and your choice of discrete GPU up to Nvidia GeForce RTX 3080, the upcoming Intel NUC 12 Enthusiast looks set to be in pre-builds and kits mixing an Intel Alder Lake CPU with one of Intel's own DG2 graphics cards. The datasheet doesn't explicitly state what CPU and GPU will be used but it will naturally use the next generation of processors (ADL). On the question of GPU it says that customers will have a choice of "discrete graphics with 8/12/16GB of GDDR6". Moreover, the GPUs offer a tri oof ports, as follows; HDMI 2.1, SP 2.0, MiniDP 2.0.

It is unfortunate for us that Intel didn't mention DG2 or Xe-HPG on this datasheet, as it would have made things much clearer/certain. It could also have been good to see some mention of GPU core/processor counts corresponding with the VRAM quotas. One thing we do see is that these whole systems will come with 19V 230W and 330W PSUs – what PSU is bundled obviously varies with CPU/GPU configuration. 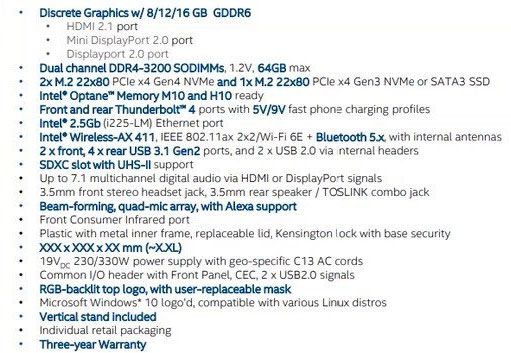 The new Intel NUC 12 Enthusiast looks quite compact, but the datasheet lacks dimensions/capacity data at this time. Other key features, not mentioned previously, are as follows:

With three dedicated video outs and twin Thunderbolt 4 ports, it isn't certain how many simultaneous displays will be supported.

It will be interesting to see the pricing of the Intel NUC 12 Enthusiast, but it probably won't be releasing very soon, the Alder Lake launch is supposed to be spearheaded by enthusiast desktop parts (K), so perhaps the first official glimpse of this NUC will be CES 2022. What other NUC 12th gen models we will see is not known at this time.

Posted by ohmaheid - Mon 09 Aug 2021 11:35
So no DDR5 memory subsystem as some predicted. Reports too of higher power requirements than Rocket Lake. It's starting to look like a bit of a dog…
Posted by six_tymes - Mon 09 Aug 2021 11:43
Ill be honest, I have been waiting for this, and I am extremely disappointed to see it not have DDR5 and not have PCIE gen5.

If you are going to call a product a Enthusiast line, and it is late in 2021 with both DDR5 and PCIE5 right around the corner, then release it with the newest tech. Who is the dunce at Intel that missed this launch opportunity?
Posted by kompukare - Mon 09 Aug 2021 12:24

six_tymes
Ill be honest, I have been waiting for this, and I am extremely disappointed to see it not have DDR5 and not have PCIE gen5.

If you are going to call a product a Enthusiast line, and it is late in 2021 with both DDR5 and PCIE5 right around the corner, then release it with the newest tech. Who is the dunce at Intel that missed this launch opportunity?

Well, it is good to have early adopters willing to overpay for what will quickly become the DDR5 equivalent of DDR4-2133. The more earlier adapters, the sooner DDR5 truly becomes mainstream for the more sensible buyers later.

As for PCIe 5: isn't that again just higher numbers for higher numbers sake? PCIe 3.0 is still plenty for GPUs, while PCIe 4.0 is only starting to become more common for NVMe controllers. Plus did the X570 chipsets require a fan have anything to do with PCIe 4.0 being power hungry? Cannot see PCIe 5.0 being any different then.

Don't get me wrong: progress is good, but being obsessed on certain number makes little sense. Especially since memory transitions have always been slower than forecast and at higher prices too.
Posted by excalibur1814 - Mon 09 Aug 2021 12:35
Has anyone actually managed to buy a small NUC11 device? Other than from rip off simplynuc? In the U.K. it's all, ‘ordered upon request’. None on eBay or Amazon (unless you pay nearly double).