A Kickstarter project that proposes a 'maker board' PC powered by an AMD Ryzen Embedded V1000 processor has found great success in the fortnight since its launch. The Udoo Bolt is a 12cm square bare board that promises to be "almost twice as fast as the MacBook Pro 13-inch," while additionally delivering a powerful GPU, and Arduino compatibility, for US$229. Udoo's project started with a goal of about £75,000 and has already surpassed £305,000 with 46 days to go. 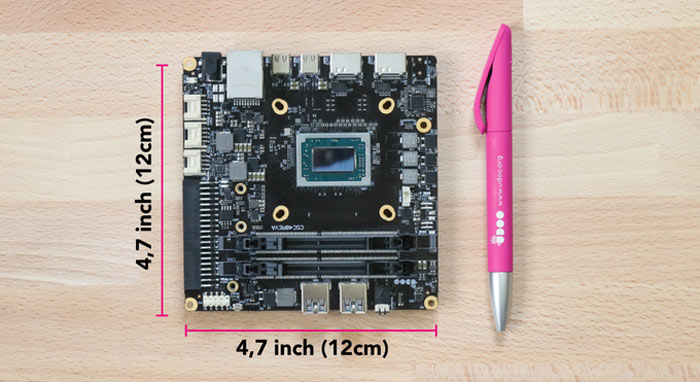 Described as "a quantum leap compared to current maker boards," the Udoo Bolt is said to be a capable AR/VR project computer. Udoo claims the board can "handle any current AAA game, delivering an impressive gaming experience at HD framerates," and they aren't talking about mobile games - the board can run either Windows 10 or Linux - your choice. You also have access to AMD's latest tech, providing fast NVMe SSD storage options, HDR visuals, Multi-monitor viewing, and FreeSync. 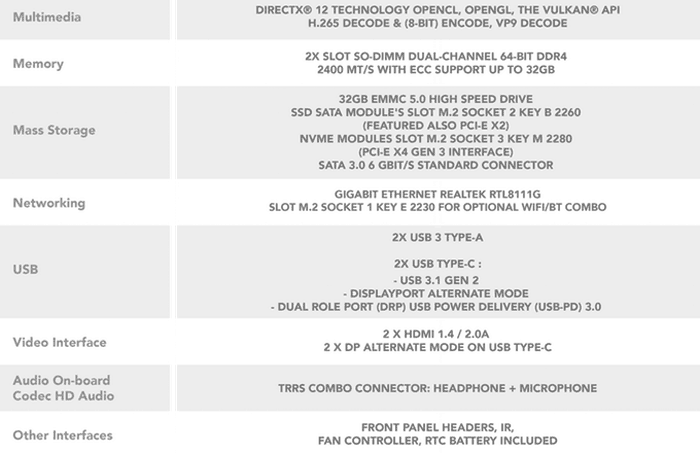 The table above shows shared qualities of the Udoo Bolt v3. Please note as a bare board system you have to supply your own RAM (DDR4 SO-DIMM x2 slots, support up to 32GB), your own OS, and even your own PSU on entry level packages. There is a pre-installed 32GB eMMC storage device but you can upgrade to a faster or more capacious M.2, SATA, or M.2 NVMe SSD. Nicely, it comes with a case, as shown below. 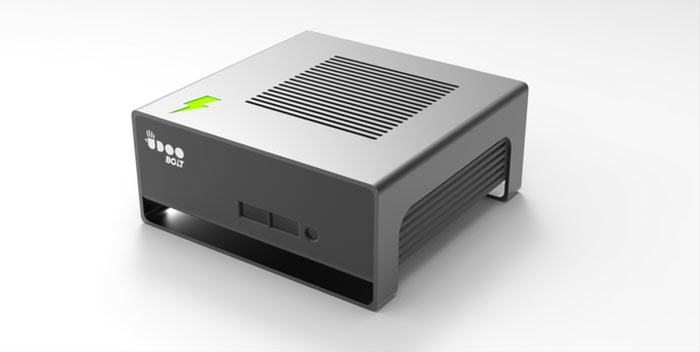 In addition to the above specs, you have the Arduino Leonardo compatible inputs, outputs, connectors and I/O. Remember, as mentioned above you can install and run Windows 10 or a Linux OS on this board which is powered by either a 19V DC in jack or USB Type-C power delivery.

At the time of writing 45 of the Early Bird Udoo Bolt v3 boards were still available at $229. If you prefer the Udoo Bolt v8 that is available in packs priced from $309 upwards.

Hmm,the lower end model has a 2C/4T Ryzen CPU,so it makes me wonder why there isn't a similar part available yet on AM4??
Posted by 3dcandy - Thu 14 Jun 2018 18:28
I don't see the point of a 2c/4t part on AM4. AMD are attempting to move to more cores not keep lower end 2c/4t. Intel has had to respond too
Posted by edmundhonda - Thu 14 Jun 2018 19:06
That higher end one has the same number of CUs as the Ryzen 3 2200G, so in games it'll perform like one of those, clocked way down to fit the TDP and struggling through DDR4-2400. Their talk of AAA gaming is overselling it somewhat.

They were ~6 months late delivering their last maker board project on Kickstarter FYI.
Posted by scaryjim - Thu 14 Jun 2018 20:13

CAT-THE-FIFTH
… the lower end model has a 2C/4T Ryzen CPU,so it makes me wonder why there isn't a similar part available yet on AM4??

Market segmentation? Attempting to move some cheap Bristol Ridge APUs in the £50 - £60 segment while they've got surplus stock? 2200G is selling well enough that they don't feel the need to bring in a lower cost desktop chip? The mobile and embedded segments are capable of absorbing all the dies allocated to 2C/4T products? (this is the embedded version of the Ryzen 3 2200U, after all).

edmundhonda
That higher end one has the same number of CUs as the Ryzen 3 2200G, so in games it'll perform like one of those, clocked way down to fit the TDP and struggling through DDR4-2400. …

It's the embedded version of the Ryzen 5 2500U. Depending on improvements from driver optimisations and what settings/resolution you're talking about, I don't think AAA gaming is that far off tbh (see https://hexus.net/tech/reviews/laptop/115754-acer-swift-3/?page=7 for gaming benchmarks on a Ryzen 5 laptop).
Posted by philehidiot - Thu 14 Jun 2018 22:46

CAT-THE-FIFTH
I read that as Usain Bolt and wondered why he had an embedded AMD Ryzen Embedded V1000. I still want one for some reason!

All I can say is that their marketing works, I thought the same!