Last December, HEXUS reported on the SSD maker bait and switch scandal. In case anyone is unsure about what this means, it is when a product maker (SSD makers in this case) sends out a product for reviews and shortly after the product is established certain components are swapped for cheaper ones. Typically, the underhand nature of this MO means that there is little if any indication that any component parts have been switched, in the product name, on the packaging or website, but users start to notice the product doesn't live up to its promise, as per historic reviews.

Last year, it was disappointing to see newer Adata XPG SX8200 Pro revisions were noticeably slower than the launch version. Since that time, there have been various others caught doing similar SSD component re-jigging. Earlier this week, WD admitted it replaced the NAND flash and updated the firmware in the WD Blue SN550, beginning in June 2021. It updated the data sheet, but most wouldn’t be aware that this drive might perform up to 50 per cent slower than the original revision, once its cache had been filled up. Patriot and Crucial have also been found switching SSD components in the last few months. 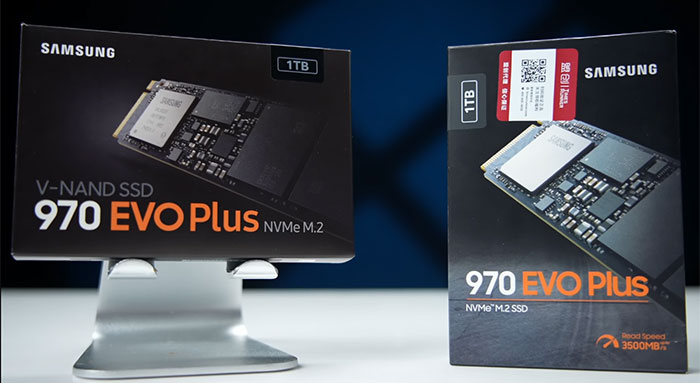 It seems like semiconductor component shortages have forced the hand of usually reputable firms into components switching, and some have done it better than others. Moving onto our headline case, at last, Samsung has changed the hardware spec of the well-regarded 970 Evo Plus SSD – however it has made changes to the packaging (see above), part numbers, and spec sheets, so it should be a bit more easy for buyers to notice. Moreover, the spec change re-jigs the components to offer a mix of performance specs that is basically on a par with the original.

As you can see above, the changes that we know of involve some of the most important components of an SSD; controller, NAND, and DRAM cache. A Chinese YouTuber, 潮玩客, has helpfully A/B tested the old and new Samsung 970 Evo Plus SSD, to see what if any differences will be observed in a range of real world and synthetic tests. 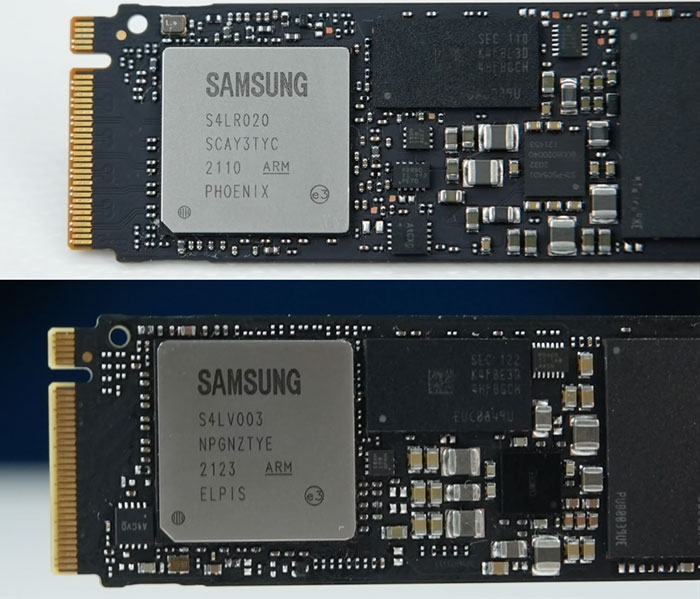 What was found was that the new SSD is faster in workloads that involve transfers of 115GB of lower, which will be most of the time for most people I guess. In synthetic tests like CrystalDiskMark and in the AS SSD benchmark the results were pretty balanced, in that sometimes the new model pulled ahead, sometimes the old model.

Old model results on the left in the above benchmark comparisons

In summary, Samsung hasn't been very naughty here, compared to its rivals mentioned above, but it could have done better with '970 Evo Plus v2' written clearly on the redesigned box, in addition to changing the part number, and spec sheets. As ComputerBase points out, Samsung previously released 'v2' SSDs – though the last time (SSD 850 Evo v2) the new model offered only advantages and no drawbacks.

CAT-THE-FIFTH
Also,our little Hexus investigation also seems to indicate there are potentially two versions of the WD SN750,one which has much worse write performance.

I have just seen that “Western Digital promises to introduce new model numbers from now on if the company adjusts an internal SSD and that change has consequences for the specifications of a product. ”

via Tweakers (Dutch, take a translator.)
Posted by huggi - Fri 27 Aug 2021 12:10
Samsung has the advantage of also being one of the very few SSD manufacturers who make all the parts in-house and doesn't need to depend on external supply chains. So this hardware revision doesn't really smell of shortage issues but probably some internal supply optimisation since they only need to manufacture one controller for two product lines now.
Posted by CAT-THE-FIFTH - Fri 27 Aug 2021 12:11

mtyson
I have just seen that “Western Digital promises to introduce new model numbers from now on if the company adjusts an internal SSD and that change has consequences for the specifications of a product. ”

via Tweakers (Dutch, take a translator.)