Storage specialist Seagate recently published its latest set of quarterly financials - its FYQ1 2020 results. The results were solid and "exabyte shipments were near record levels," but it is in a cut throat business and it is quite important to have some good 'jam tomorrow' slides to show investors. Currently the company is ramping shipments of its 16TB drives "to support strong customer demand," but if we look back at a HEXUS report from this time last year, it seems to be slipping somewhat in its ambitions. 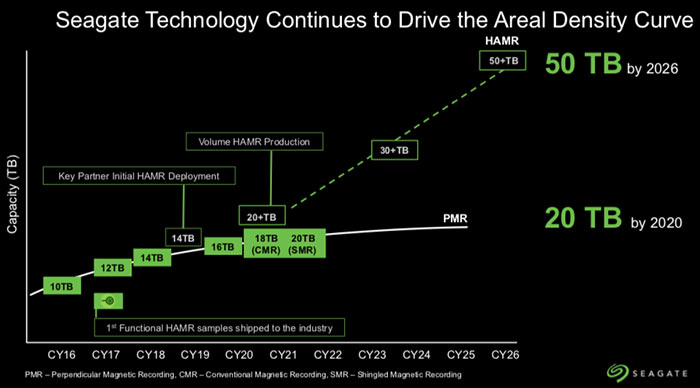 Seagate's new roadmap slides, shared in a post results conference webcast and reproduced by the likes of Anandtech show that the firm is now on the cusp of 20+ TB volume HAMR production. Dave Mosley, CEO of Seagate, provides a bit more clarity to the timescale, saying that these will ship "in late calendar year 2020". Around the same time Seagate will introduce its 18TB CMR drives.

Moving along the latest roadmap, we can see that progress with conventional tech will not really be significant, but HAMR will take over, with 30+TB predicted to become available somewhere between calendar year 2023 and 2024. The timelines shows, and this is reinforced by text to the side of the graph, that we will see HAMR HDDs reach "50TB by 2026". 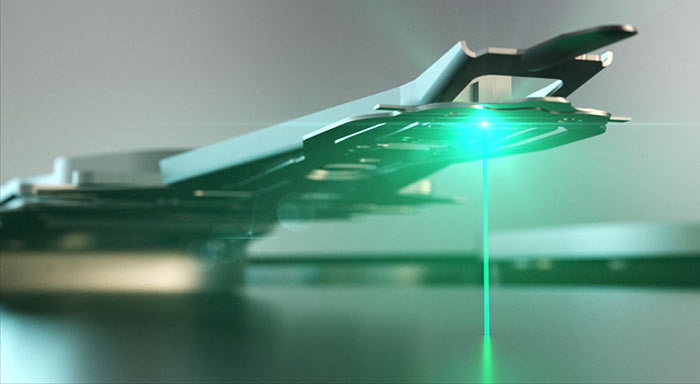 Looking back at Seagate's predictions a year ago leads to disappointment. The firm teased 100TB drives by 2025 at that time. Its HAMR roadmap illustrated this progress and stated that HAMR tech would lead to a doubling in areal density every 2.5 years. 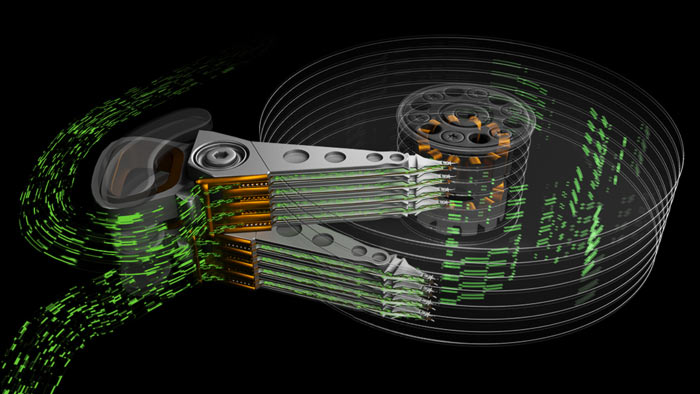 At least HDD transfer performance should get a significant boost in the nearer term with Seagate's MACH.2 tech (using multiple actuators). This tech was first announced in December 2017, and then demonstrated in March 2018. MACH.2 solutions have been in validation by several customers since September this year, said the Seagate CEO, to ensure they "meet stringent service levels".

Hoonigan
I have no base to this theory but I can easily see SSDs overtaking HDDs in capacity by 2026. They'll be old news by 2030.

agreed….unless the new glass storage physics occurs. In that case, perhaps the SSD's will be dead.

I think the issue for large capacity HDD's in 2019 is that they're just not very cheap, are they? We all know they're quite relatively quick compared to older tech spinners but they're still not… fast. And they wear out eventually too.

Although the 100TB by 2025 predicted by them a year ago would obviously have been better to happen, 50 is still a tasty proposition. Hopefully that won't cut in half again in next year's prediction though, as that would end up being much less ambitious.
Posted by Yoyoyo69 - Wed 06 Nov 2019 17:10
using multiple actuators - so yet more moving parts. Eg higher failure rates, this is Seagate too, the company who will happily ship a faulty item and then renegade on the warranty.