Asus has begun shipping an updated version of its Hyper M.2 x16 V2 NVMe RAID Card. The suitably named Asus Hyper M.2 x16 Card v2 is an add-in card that allows you to fit up to four PCIe 3.0 M.2 drives to a motherboard PCIe x16 slot to facilitate transfer bandwidth up to 128Gbps. 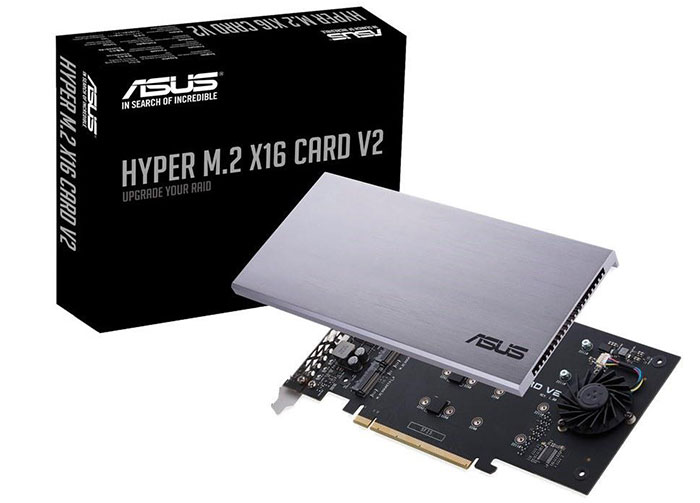 A large heatsink and active blower fan feature in the design to ensure drives are kept cool, with the PCB protected by a stylish brushed aluminium heatsink cover. Cool operation should prevent or at least minimise throttling. The bracket features an M.2 fan switch plus four activity lights, one for each SSD installed. 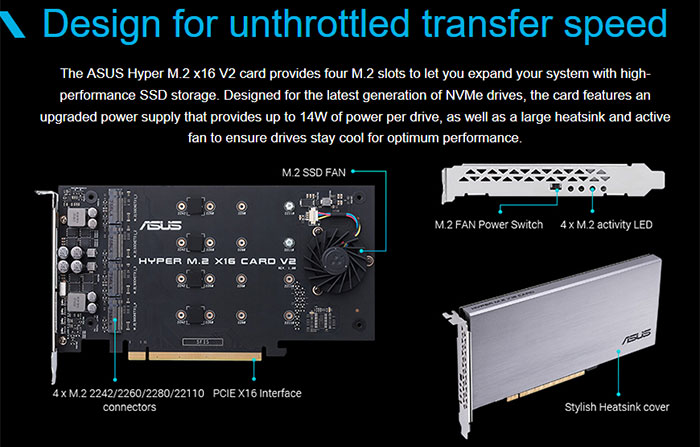 A significant difference with the Asus Hyper M.2 x16 Card v2 is in an improved power delivery circuit. Thanks to the new power design, each slot has a guaranteed 14W of power. Other than that you will see that the PCB layout has been adjusted with the blower fan pushing air up the length of the added M.2 sticks, rather than vice-versa, which probably helps cooling as the PCB M.2 connectors won't interrupt the airflow so abruptly.

For reference you can find the original product and the smaller Asus Hyper M.2 x4 mini card with room for just a single SSD, via the respective links.

I used Samsung with the first version without issue.
Posted by 3dcandy - Sat 08 Jun 2019 11:02
Intel VROC uses any SSD's it's just a standard