Samsung has announced that it has started the mass production of the industry's first 4-bit (QLC, quad-level cell) 4TB SATA SSDs for consumers. It is thought that the introduction of these drives could start a shift to multi-TB purchasing by PC enthusiasts. Later this year Samsung will follow up with 2.5-inch SATA 3 QLC SSDs in capacities of 1TB and 2TB. 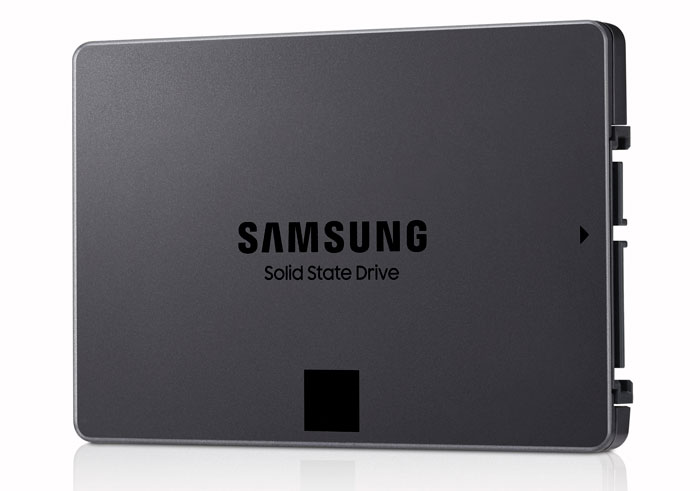 The new 2.5-inch SATA 3 drives are built using Samsung's new 64-layer 1Tb 4-bit V-NAND chips. In the upcoming 4TB drive, Samsung says that 32 of the aforementioned V-NAND chips are utilised. Performance levels are claimed to be as good as with Samsung's 3-bit SSD, thanks to the use of a 3-bit SSD controller and TurboWrite technology.

"Samsung's new 4-bit SATA SSD will herald a massive move to terabyte-SSDs for consumers," said Jaesoo Han, executive vice president of memory sales & marketing at Samsung Electronics. "As we expand our lineup across consumer segments and to the enterprise, 4-bit terabyte-SSD products will rapidly spread throughout the entire market." 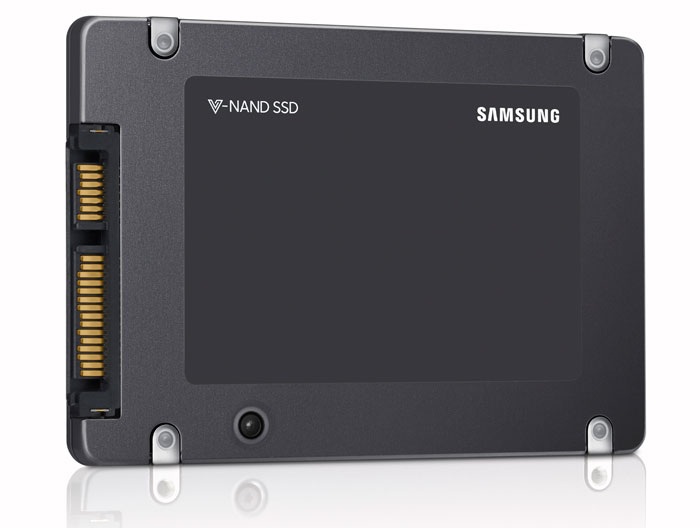 Samsung will introduce the headlining 4TGB QLC SSD, as well as 1TB and 2TB models in the 2.5-inch SATA 3 form factor later this year. Buyers will get a 3 year warranty. We currently have no indication on pricing.

As a side note, Samsung mentions that the new 1Tb 4-bit V-NAND chips will be utilised in its microSD card business. The new chips facilitate the efficient production of 128GB memory cards for smartphones "that will lead the charge toward higher capacities for high-performance memory storage," says the electronics giant.

Posted by peterb - Tue 07 Aug 2018 11:37
Pity no prices on these! My concern with SSD's in general is still lifetime and failure mode - they seem to fail suddenly without the warning signs you get with conventional drives.

I guss RAID1 with devices added from different batches (or with different use) would help (ie, start on off with a degraded array - just one drive in it - then add the second after 6 months so there is a difference in lifetime on the basis that the older one will fail first so it can be swapped out in good time)
Posted by watercooled - Tue 07 Aug 2018 11:48
Any mention of QLC seems to be met by panic about endurance, but I don't think people are taking into account that this is still V-NAND and the cell size is much bigger than it was for the last generations of planar nand. I've read in quite a few places that 3D TLC tends to have higher endurance than something like 15nm planar MLC - if people were fine with planar MLC's endurance there's really no reason to panic over 3D TLC.

Programming time on the other hand might be an issue, but would likely be hidden by SLC caching for most consumer workloads outside of writing massive files from another fast SSD.

OTOH it's definitely nice to still have a choice of MLC for applications which demand it - it's not that hard for someone moving a ton of e.g. video files to burn through a TLC drive's rated cycles in a few years, so I'm not saying it's a non-issue.

I do wonder how much cheaper they will actually be give you only get ~33% more storage vs TLC and has greater controller demands? There surely has to be a point where diminishing returns becomes a real problem when faced with slower performance and endurance which tails off far more rapidly than capacity increases.

Edit: Cross-post. Yeah I agree peterb, something a bit frightening about SSDs is their unique ability to nuke their entire contents almost instantly through e.g. controller bugs, and the way they works makes recovery extremely difficult even if the data itself is untouched on the NAND. HDDs can't really fail like that - even with a head crash you'll lose some data, but the rest of the platters should be fine and recoverable if necessary. Making out like HDDs are all bad just isn't looking at the whole picture IMO.
Posted by 3dcandy - Tue 07 Aug 2018 13:31
This is why I have robust backup procedures. Boot drive is ssd but main big storage drives are hdd's. Best of both worlds…
Posted by peterb - Tue 07 Aug 2018 13:40

3dcandy
This is why I have robust backup procedures. Boot drive is ssd but main big storage drives are hdd's. Best of both worlds…

Likewise - and I will take a clone of the boot drive on a 2.5" hdd, so that if/when the SSD does fail, IO can swap it out without needing to reload/reconfigure the OS and its applications.
Posted by DanceswithUnix - Tue 07 Aug 2018 13:42

3dcandy
This is why I have robust backup procedures. Boot drive is ssd but main big storage drives are hdd's. Best of both worlds…

So your PC could stop booting without warning and your main storage is slow and having two storage devices basically doubles your chance of seeing a failure and giving an overall system that is neither cheap not fast. Worst of both worlds? ;)

peterb
Likewise - and I will take a clone of the boot drive on a 2.5" hdd, so that if/when the SSD does fail, IO can swap it out without needing to reload/reconfigure the OS and its applications.

I presume you would do that with a boot HDD, and that isn't anything special about SSDs?