Un-Soo Kim, SVP of Brand Product Marketing, Memory Business at Samsung Electronics, said that the new 860 PRO and 860 EVO SSDs “combine the latest 512Gb and 256Gb 64-layer V-NAND, up to 4GB LPDDR4 mobile DRAM and a new MJX controller to elevate the user experience for both consumers and businesses”. Samsung says that the new MJX controller is faster than on previous SATA drives, capable enough for workstation use, and has improved Linux compatibility.

The new drives, the successors to the popular 850 PRO and 850 EVO, support up to 560MB/s read and 530MB/s write speeds, and deliver up to 100K IOPS. Durability is another highlighted feature of the new drives. Samsung rates the 860 PRO for up to 4,800 terabytes written (TBW), and the 860 EVO for up to 2,400 TBW. It backs up these figures by extending the warranties of the 860 SSDs to five years.

Samsung will be making the 860 PRO available in 256GB, 512GB, 1TB, 2TB and 4TB capacities. As a 2.5-inch only form factor series it is targeted at PCs, laptops, workstations and NAS. The 860 EVO comes in 250GB, 500GB, 1TB, 2TB and 4TB capacities and offers greater form factor flexibility (2.5-inch, mSATA, and M.2 form factors). Emphasising the advancements made in the EVO series, Samsung says that the 860 EVO has up to six times longer sustained performance than its predecessor due to enhanced Intelligent TurboWrite technology. 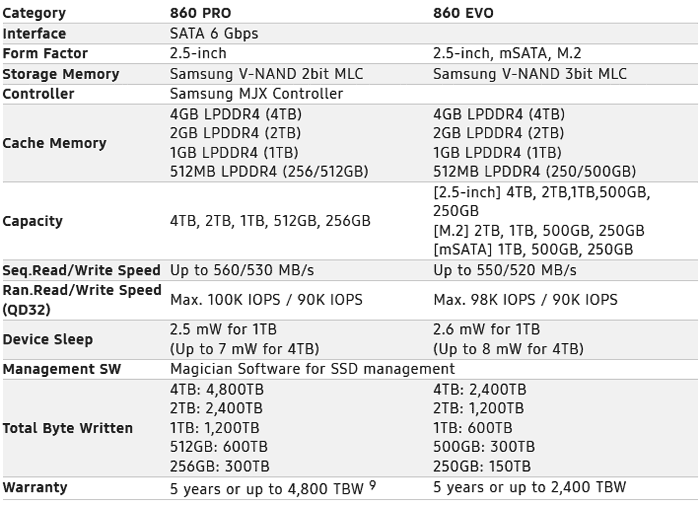 They are also lowering the Pro warranties to five years from ten.

Since the performance is so close now between the SATA Pro and Evo, there's very little to recommend the price premium for the Pro.
Posted by GoNz0 - Wed 24 Jan 2018 13:30
With the current support issues along with bad firmware releases I will no longer be buying Samsung SSD's especially after the last firmware promised hardware bitlocker and it turns out it's broken. I now have a drive locked in security mode and the best they can offer is an RMA as it isn't a priority fix. The 960 series is pretty much shagged with current firmwares, slow down's lock up's and the security issue all in the 3xxx firmware releases.
Posted by peterb - Wed 24 Jan 2018 13:35
Only 5 years for the Pro? - the 850 pro has 10 years.