At CES 2020 Nvidia is trumpeting the virtues of 360Hz refresh gaming monitors for eSports players. Spearheading this super fast refresh rate advance is a new monitor from Asus, whose full specs are yet to be shared - but we know the most of the headlining essentials.

The Asus ROG Swift 360Hz G-Sync display will be released later this year and sports a next generation panel from AU Optronics. What we know about the panel used at the time of writing is that it supports refresh rates up to 360Hz "for unparalleled smoothness, [and] lower system latency for faster reaction times". The only other spec we have at hand is that the display panel is 1080p and has a 24.5-inch diagonal. Obviously there are important specs missing: we would like to know such as the panel type, max brightness, colour reproduction metrics, and more.

If you take a look over the Nvidia blog post, the greatest thrust of it isn't about the new technology but rather working to convince readers that the extra fast refresh rate on offer here is a feature worth paying for. We are all familiar with the law of diminishing returns, but Nvidia is essentially saying in its blurb and linked studies that humans can see benefits in smoothness and latency up to 100Hz refresh.

In the video above you can see CS:Go champion 'nOthing' outing the prototype Asus ROG Swift 360Hz eSports display through its paces in his game of choice. A key quote is that "When I switched between 240 and 360Hz, I could immediately tell that there was a difference". A particular performance buff for the pro eSports gamer was felt in transferring targets. 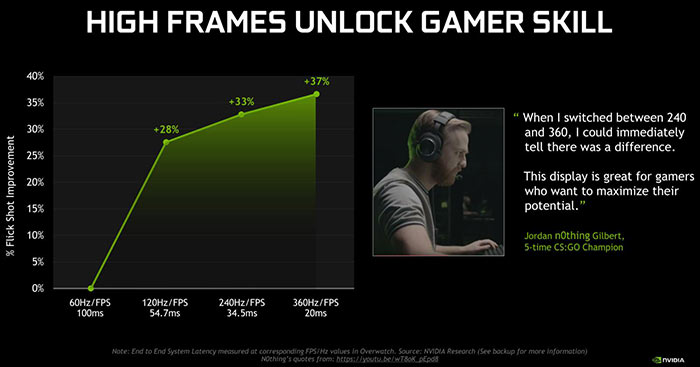 Other popular eSports titles which could feasibly run at 360Hz on this monitors using beefy Nvidia GPUs include; Rainbow Six: Siege, Overwatch, and Fortnite.

As the benefits fo super-high refresh monitors aren't easily conveyed by mediums such as web pages and YouTube videos (as was the case with features like HDR and VRR) Nvidia has its suite of 360Hz demos at CES. Pricing and availability for the Asus ROG Swift 360Hz eSports display will emerge later this year, as it nears launch.

Posted by Kato-2 - Mon 06 Jan 2020 10:17
This will be very attractive to for CSGO players, I'm quite surprised this is launching with such a jump, there was a 300Hz laptop but to be hitting 380Hz is quite the achievement.

Also before the inevitable you cant see more than 60Hz nonsense

Going to higher refresh rates can have diminishing points of returns. Humans cannot see individual frames at 480 Hz. However, humans can see other side effects of non-analog motion (discrete frames to represent moving objects). Many researchers including Oculus’ chief scientist Michael Abrash, extoll the benefits of quadruple-digit refresh rates. So even 480 Hz is not the final frontier yet.

Kato-2
This will be very attractive to for CSGO players, I'm quite surprised this is launching with such a jump, there was a 300Hz laptop but to be hitting 380Hz is quite the achievement.

Also before the inevitable you cant see more than 60Hz nonsense

Going to higher refresh rates can have diminishing points of returns. Humans cannot see individual frames at 480 Hz. However, humans can see other side effects of non-analog motion (discrete frames to represent moving objects). Many researchers including Oculus’ chief scientist Michael Abrash, extoll the benefits of quadruple-digit refresh rates. So even 480 Hz is not the final frontier yet.

What the visual eye perception is and what the brain perceives are two different things, visually we can only judge up to something like 150hz however the Myelinated nerves can communicate things up to like 1000hz so the brain may detect a change we don't necessarily think we pick up on visually. So I can see the logic in these monitors even though i'm not in the market for one. there is diminishing returns after a certain point and only product testing can determine that real worth value but scientifically it is valid.
Posted by 3dcandy - Mon 06 Jan 2020 11:29

darcotech
Wonder, what is the refresh rate of the life simulation that we are living in? our “Matrix”?

The e-sports people for whom fractions of a millisecond are vital may see an improvement. I'm almost certain most people will not. Those who say they can see a difference are the kinds of people who spend a fortune on expensive cables for sound systems. Must be better because I'm told it is. And it was expensive.

I've no problem with people spending their money on what they like. To me this is “MOAR NUMBER MOAR BETTER” marketing as usual and you'll be better off spending the money on things that will make more of a difference, but aren't as easily quantifiable on the box.

Why do Nvidia want you to buy these monitors? I can guarantee you it's not about Gsync modules. It's about selling you GPUs more frequently which you'll need to keep newer games producing those insane frame rates.

There are more important aspects to image quality which will almost certainly be compromised for these frame rates. Myself, I think HDR makes a bigger difference to most players for most games, followed by 4K. At that point, frame syncing tech is more valuable than high refresh rates as you're going to struggle to churn out high enough FPS to take advantage. Therefore, this is a supremely niche product for those for whom FPS is more important than anything else.

This being said, I'm fully aware I'm being hypocritical in that I have a sound card which most people say they won't notice any benefit from, but makes a difference to me.

The only way I'd spend the money on this stuff is if the monitor was put in front of me and I noticed the difference, the image quality not being sacrificed.

I suspect my next monitor will be 120Hz+ but beyond that (for Mr Average like myself) it's just wasted money better spent elsewhere.