LG has launched a pair of gaming monitors into its UltraGear range. A particular highlight of these new gaming monitors is that they are claimed to be the "world's first IPS 1ms gaming monitors". Additionally, they have attractively high refresh rates, Nvidia G-Sync, excellent colour reproduction (DCI-P3 98 per cent) and high resolutions. As gaming monitors, both new models feature gamer-specific settings such as; Dynamic Action Sync mode, Black Stabilizer, and Crosshair which can be especially useful in FPS games.

The 38GL950G is a curved 38-inch Nano IPS monitor with a resolution of 3840 x 1600 pixels (AKA UltraWide QHD+) and 21:9 aspect ratio. As per the headline, this is a 1ms GtG monitor and it sports impressive refresh rates too - up to 175Hz overclocked. On the topic of refresh rates this is a G-Sync certified monitor with the necessary built-in Nvidia hardware.

Deepening your immersion, the curved screen features a "virtually borderless design" plus upgraded Sphere Lighting 2.0 – an array of RGB lights located at the rear of the monitor that heighten the ambience of when gaming by changing colour in accordance with the on-screen action. 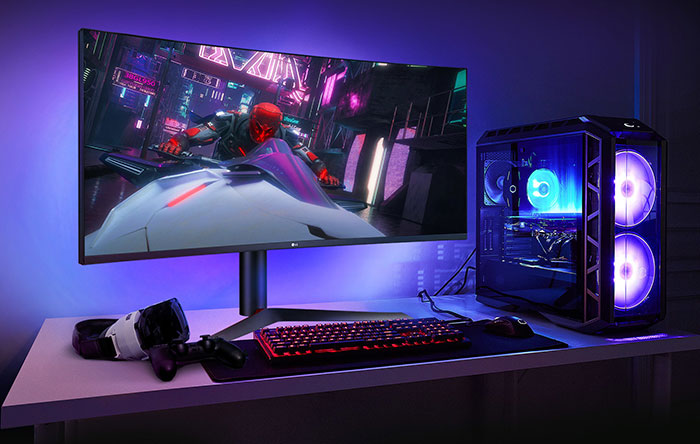 Last but not least the 38GL950G is VESA DisplayHDR 400 certified with a max brightness of 450nits. This 38-inch monitor sounds a bit special but costs a pretty penny - its MSRP is US$1999 with pre-orders starting from 1st July.

The 27GL850 is based around a flat 27-inch Nano IPS panel with a resolution of 2560 x 1440 pixels (QHD). While it offers the same colour gamut, bit depth, and fast response time other aspects are toned down somewhat. TO start with this is an Nvidia G-Sync compatible display so I think it is 'just' an Adaptive Sync monitor that has passed Nvidia's tests. It sports a top refresh rate of 144Hz, HDR10 compatibility, but a peak brightness of only 350nits.

Hopefully the price tag makes the above mentioned spec cuts palatable as the LG 27GL850 has an MSRP of US$499. Like its bigger brother it will roll out next month with pre-orders starting from 1st July. 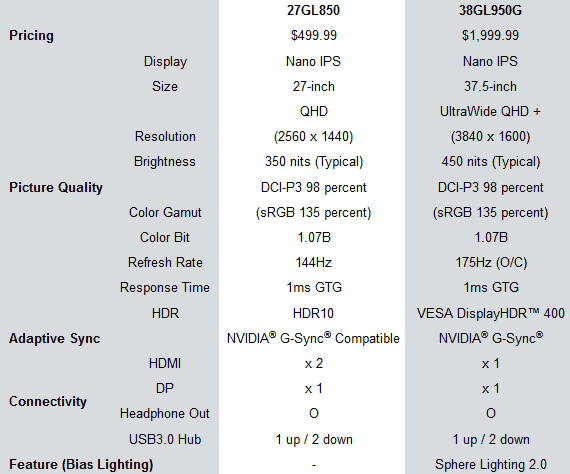