AMD took the wraps off the first Zen 3 CPUs just last week. The initial salvo of AMD Ryzen 5000 Series processors will be limited to four SKUs to start with, and motherboard makers are already providing BIOS updates for AMD 500 Series chipsets so they can be ready for the hard launch (from 5th November). Those already on the AMD Ryzen platform, packing systems with 400 Series chipsets will have to wait until January 2021 and onwards for AMD board partners to release the first beta support files. 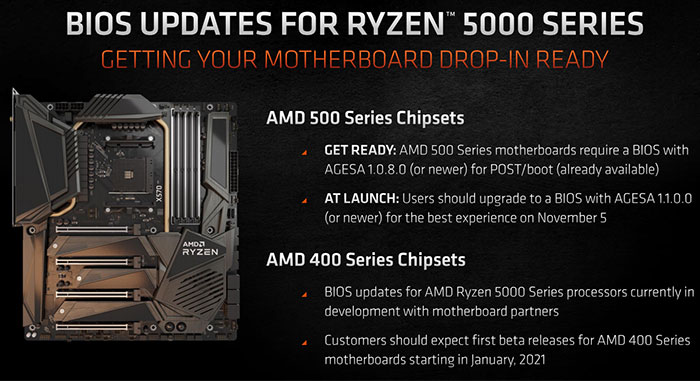 In May this year AMD appeared to bow to pressure to add Zen 3 processor support to X470 and B450 motherboards, where possible, even if these 'beta BIOS' files need to disable support for older processors to make capacity available for Ryzen 5000 CPUs. However, support of all 400 Series motherboards couldn't be guaranteed to be wrinkle-free and would need partner co-operation and development time to be achieved.

Later in May MSI confirmed that its AMD 400-series motherboards would support Zen 3 processors, now known to be arriving as the AMD Ryzen 5000 series of CPUs for desktops. A video hosted by Marketing Director, Eric van Beurden, made this very clear and at the time we summed up the news expecting to see/hear similar statements from other major motherboard makers like Asus and Gigabyte.

In recent weeks Asus has gone public with a couple of motherboard announcements. At the end of Sept it announced an updated range of AMD B450 motherboards. Offering upgraded power delivery and cooling (on select models) they seemed to be primed for Zen 3 processors, though this wasn't mentioned as it was before AMD's special Zen 3 event. Just last week Asus released a lengthy list of its AMD 500 Series motherboards which would be getting BIOS updates with full support for the AMD Ryzen 5000 Series desktop CPUs.

The omission of any specific mention of Asus B450 or X470 motherboards and support for Zen 3 over recent weeks obviously grated on some. Yesterday a news story popped up on several sites as someone shared an Asus Product Support reply to a query about its X470 chipset motherboards supporting the Ryzen 5900X CPU. 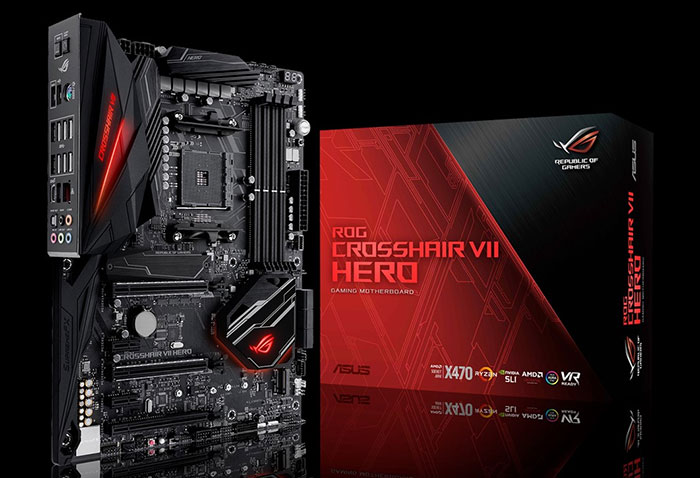 NotebookCheck was one of the sources of this story, and reproduced an email from Asus Product Support stating that "according to our engineers, we have no plans for the Crosshair VII Hero to support the Ryzen 5900X, please purchase Crosshair VIII Hero and any Asus B550 motherboard that will support Ryzen 5900X and 5000 Series processors".

Now Asus has written to HEXUS to assert that the support person gave "false information". To clarify, the Asus senior marketing team says that "Asus will follow AMD's support plan to release a new BIOS on X470, B450 and B450 II motherboards and all those available in the market at present will also be compatible with that BIOS upgrade. Beta BIOS support, following AMD guidelines and timelines means this will be ready to roll out around Jan 2021." Additionally, the newer B450 II motherboards feature USB Bios Flashback so you’ll be able to get a new CPU and upgrade the BIOS straight away without posting with a previous generation CPU.

That AM4 socket got to be one of the most long lived sockets in PC history, and still like me with TR4 people are probably going to whine,,,,, at least some people.
Posted by kompukare - Wed 14 Oct 2020 13:58

That AM4 socket got to be one of the most long lived sockets in PC history, and still like me with TR4 people are probably going to whine,,,,, at least some people.

Of course all AMD as well ;)