The MSI Slider S20 has the following specification;

The laptop appears to be based upon the Intel Letexo design which is shown below in operation at IDF Beijing a few weeks ago; changing from a full, standard looking laptop, including chiclet keyboard, into a sleek tablet with the keyboard fully concealed. 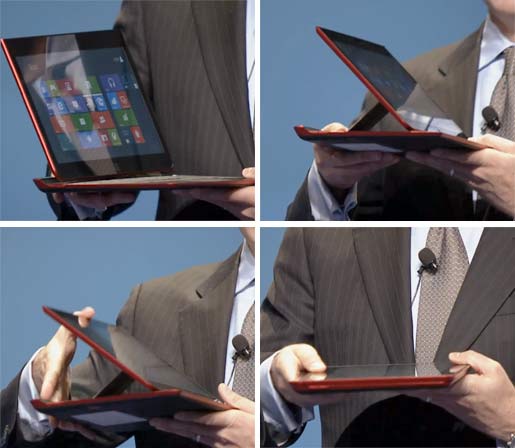 In the MSI product picture you can’t see a touchpad or trackpoint device built-in so it looks like touch screen will be the default pointing method while you are on the road. The Intel Chief River processor within the MSI Slider S20 is based upon the 22nm fabrication process and the on-die GPU features a DirectX 11 graphics core.

This is all the information we have on the MSI Slider S20 right now. The new slider Ultrabook, which MSI boasts is “the only Ultrabook in the world that also functions as a tablet” and also “the most powerful tablet in the world” will be at the MSI Booth at Computex this week so we should see quite a lot more info and perhaps some hands on tests of this interesting Ultrabook shortly.

Will it run debian?