In concert with improved battery life, Ryzen 5000 Series Mobile is also a recipient of collaborative power and performance control (CPPC) technology which has been integrated into desktops since the Ryzen 3000 Series. CPPC enables much finer-grained control over CPU frequency and voltage than selecting from the traditional limited number OS-controlled P-States. This CPU-driven control optimises the voltage/frequency (VF) curve for each application, giving precisely as much power as it needs, and no more. The ongoing power saving over P-States are a boon for battery life, whilst being able to very quickly switch between many different points on the VF curve aids responsiveness. 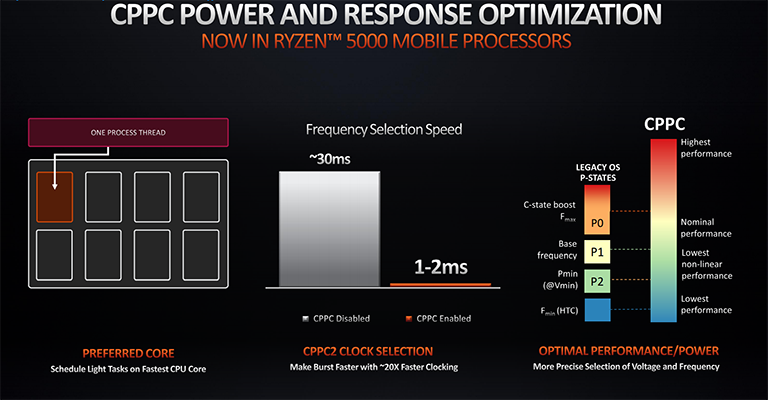 Unlike before, where CPU voltage was tied in with the GPU's, AMD has now decoupled it such that the Zen 3 cores can run at lower, different voltages depending upon heterogenous computing load. It stands to reason that lower-speed cores can dial back their juice a lot more than on the inextricably tied architecture for the previous generation, representing an easy power win this time around.

Key focus for this new breed of mobile chips is power efficiency and the inclusion of higher-performing Zen 3 CPU cores. Understanding that they follow on quickly from last year's Renoir processors, with time to market also a major priority, AMD keeps to the established Vega architecture for the graphics portion of the SoC. Such news may disappoint potential customers looking for newer RDNA (2) technology present on discrete desktop graphics cards. We'd cautiously argue the same, but can understand the decision to go with a tried-and-tested IGP when time is very much of the essence. 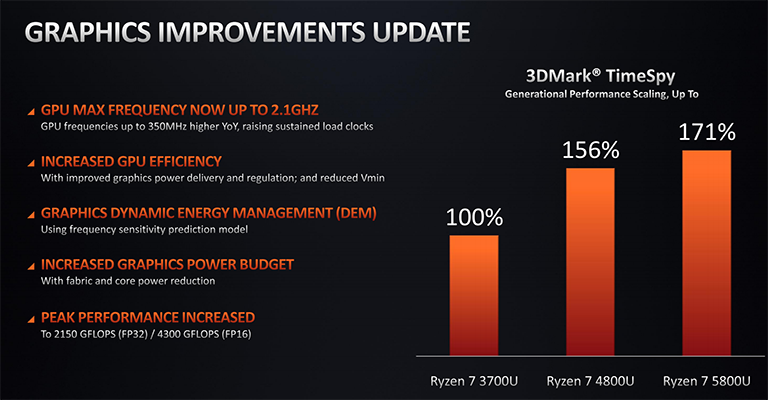 Even so, says AMD, it has improved the capability of the graphics by increasing the maximum frequency by 350MHz, to 2,100MHz, arguably made possible by a combination of a more refined VF GPU curve and the power optimisations resident elsewhere on the SoC. In other words, on many occasions, there's now more power available to the IGP and finer power control at all frequencies... even though chip TDP hasn't gone up.

The Ryzen 5000 Series Mobile stack comprises 14 processors that are effectively APUs as each carries integrated graphics. The six U Series chips are equipped with a standard 15W TDP, configurable up and down by a few watts, and thus are primed for thin-and-light laptops that typically do without discrete graphics. The remaining eight are designated H Series, which use the same underlying technology but carry a higher 35-45W+ power budget for increased performance on all fronts. 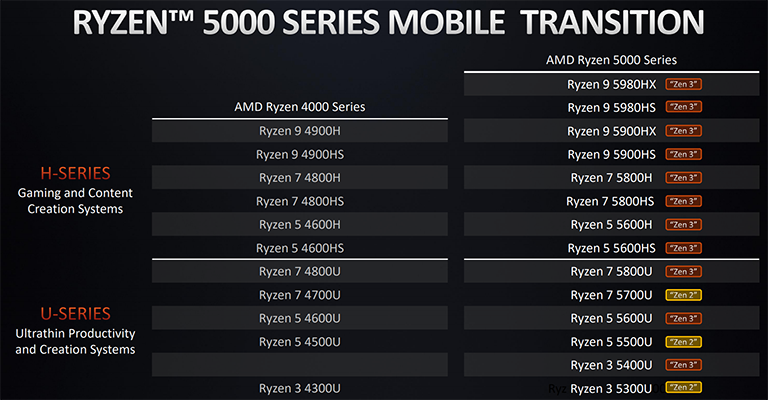 Take another look at the slide and you will notice the presence of three U Series processors that have Zen 2 cores. Shouldn't all Ryzen Mobile 5000 Series have Zen 3, per the discussions? Understanding the modular approach to design, AMD says some customers prefer to use the latest SoC but are happy with the performance (and price) of older CPU cores, making the year-on-year laptop model transition even simpler, especially when there's likely to be more Zen 2 silicon at foundry partner TSMC.

That kind of makes sense, but do understand that these chips are not merely rebranded 4000 Series. We know this because they are integrated into the 5000 Series SoC, which carries the power optimisations defined above. These somewhat hybrid chips are known by the codename Lucienne, instead of Cezanne for the Zen 3 cohort. It pays to do your model number research before shelling out hard cash.

We can stack the 2021 chips up against their Renoir 2020 peers in a longish table.

The new processors are emboldened. A lot to take in.

AMD introduces two new members into the fold. The HX series is touted as being the best mobile processors for gamers and content creators. Equipped with the same underlying technology as extant HS, AMD ups the wick by allowing select partners to crank up the wattage to >45W. Such a move boosts speeds up by a notch or two, though the uplift isn't huge over the equivalent HS parts. 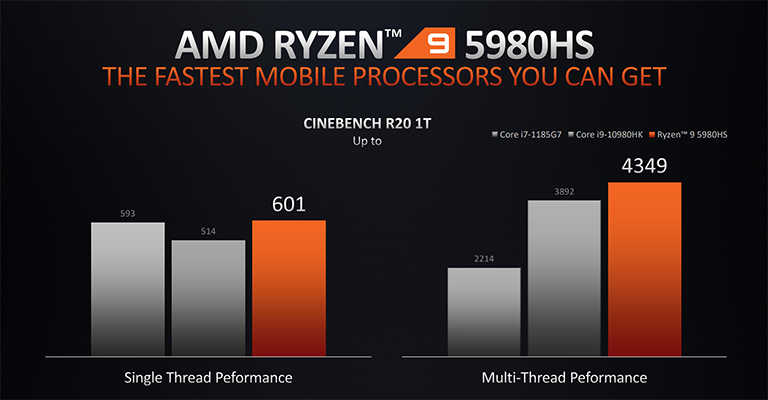 Putting some benchmark meat on the bones, AMD reckons its best-ever mobile chip is able to hit 4,349 marks in the popular Cinebench R20 all-core test. Looking at our latest desktop CPU reviews, that places it comfortably higher than a Core i5-10600K or Ryzen 5 3600XT. AMD shies away from comparing graphics performance against Intel because it contends that laptops housing this breed of chip will run with discrete solutions from either AMD or Nvidia.

Switching gears out to the U Series shows AMD is arguably more impressive on the 15W SoC scale. There's at least a 10 per cent year-on-year uplift over the decent Renoir chips. 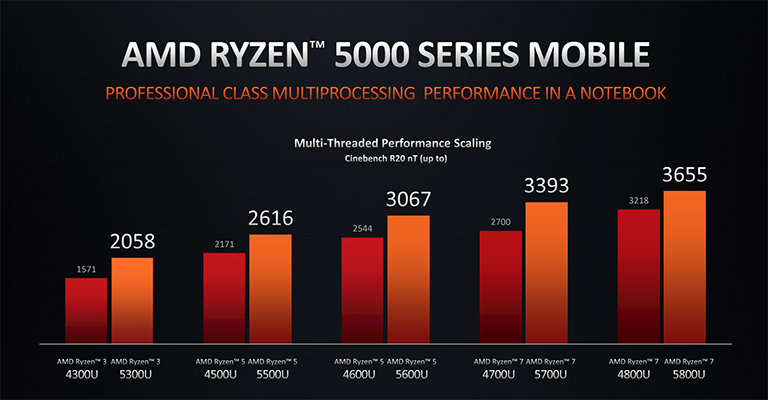 And that's what one can hope for in AMD-powered laptops in 2021. About 10 per cent more CPU oomph and a matching increase with respect to integrated graphics.

Does that mean they are out-and-out winners for the mobile space? We can't say that until models have been compared to their latest Intel counterparts, which is an area where the blue team remains strong. The fast transition from Renoir to Cezanne/Lucienne also means AMD hasn't been able to do much outside of sheer performance. For example, the SoC connects to external peripherals via a PCIe 3.0 link, which is at performance odds with the PCIe 4.0 mantra AMD is popularising on the desktop. A direct result of this is that Intel's Tiger Lake, which does have PCIe 4.0 support, will leapfrog Cezanne in this regard.

Overall, AMD still has a compelling number of mobile SoCs for a wide range of high-performance and thin-and-light laptops. If 2020 was the year of increasing awareness in the mobile space, 2021 constitutes the continued building of that momentum.

If configured correctly yes… doubt if configured down to lower power envelopes they'd ever get that high
Posted by deksman2 - Wed 27 Jan 2021 22:33

Manufacturers seldom allow AMD hw (especially U parts) to clock to its full potential and operate up to the maximum designated TDP… but its possible things will be different this time.
Posted by 3dcandy - Thu 28 Jan 2021 00:11

deksman2
Manufacturers seldom allow AMD hw (especially U parts) to clock to its full potential and operate up to the maximum designated TDP… but its possible things will be different this time.

Because they tweak them for maximum battery life. Some you can do it in the BIOS but mainly they tweak them down to say 35W for thermal performance
Posted by Roobubba - Thu 28 Jan 2021 11:39
I picked up an HP Envy with the 4500U in it, and it's a fabulous chip (HP bloatware aside, it's a lovely machine all around, too). Very pleased to see AMD build on their success here. Though we must always keep pushing them: linux drivers, c'mon AMD! Please give us a proper alternative to Intel/Nvidia under linux!