AMD's main consumer thrust for the first half of this year is in promoting the Ryzen 5000 Series Mobile processors announced at CES. Codenamed Cezanne, 14 chips are designed to go into a wide range of laptops spanning the full spectrum of thin-and-light and gaming models. Processors house up to eight CPU cores and 16 threads and all carry integrated graphics from the existing Radeon line.

Building on the foundations of last year's Ryzen 4000 Series Mobile processors, AMD's aim with the new batch is to make the generational transition as easy and fast as possible for the growing number of laptop makers adopting its technology. Starting next month, AMD expects Ryzen 5000 Series Mobile to proliferate into 150 laptops during 2021, reinforcing the fact that the launch is a huge deal for the company's continued expansion in the mobile space.

We'll take a deeper look into the technology powering these new processors and then, a few days later, evaluate an Asus ROG Flow X13 laptop featuring the best-in-breed chip.

How has AMD improved mobile technology for 2021?

It is important to understand that time to market is the key driver for Ryzen 5000 Series Mobile. As top-tier laptop manufacturers typically refresh their across-the-board models on a yearly cadence, the ability to shoehorn newer, faster, more efficient technology into existing notebook infrastructure is very much a good thing. This is why AMD uses a modular approach to mobile design, enabling speedy integration by upgrading key parts of the system-on-chip (SoC) whilst also optimising general processing through iterative improvements that naturally come with time and experience. 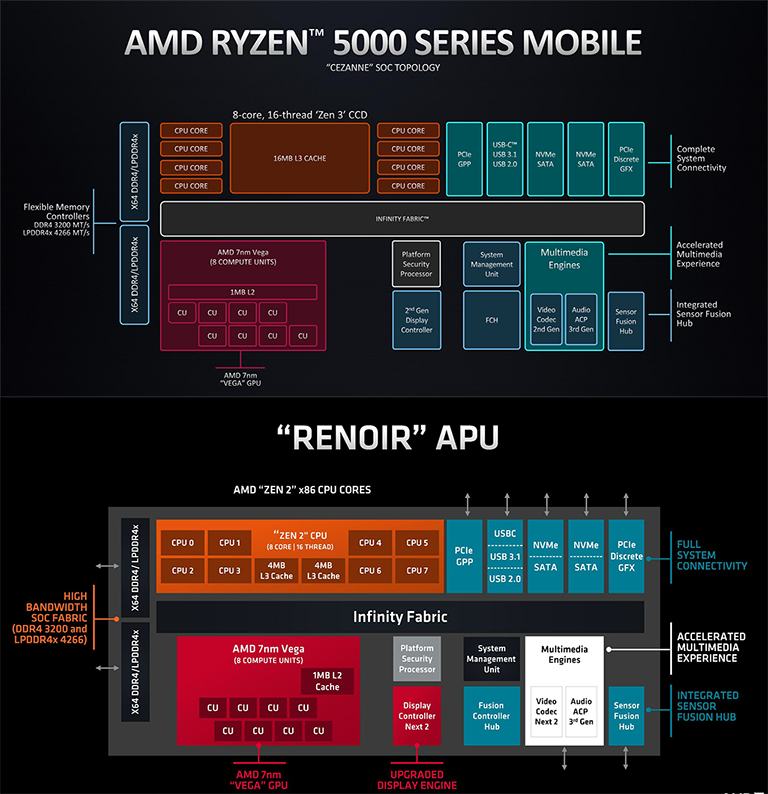 The above cobbled-together block diagram compares, at a high level, the 5000 Series with the in-market 4000 Series known by the codename Renoir. The very fact they're mostly similar in layout is deliberate design for that fast turnaround and speed to market we have discussed, and AMD built this familial, reusable SoC architecture specifically to accommodate upgradeable processors.

The big news, of course, is the CPU upgrade from Zen 2 cores to Zen 3. As the newer cores carry more on-chip cache, taking up space, the total SoC size increases from 9.8bn transistors and 156mm² on Renoir to 10.7bn and 180mm² this time around. Underscoring the benefits of this modular approach, the latest Zen 3 on mobile follow on just three months after its debut on Ryzen 5000 Series desktop. Let's zero-in on their implementation at this juncture. 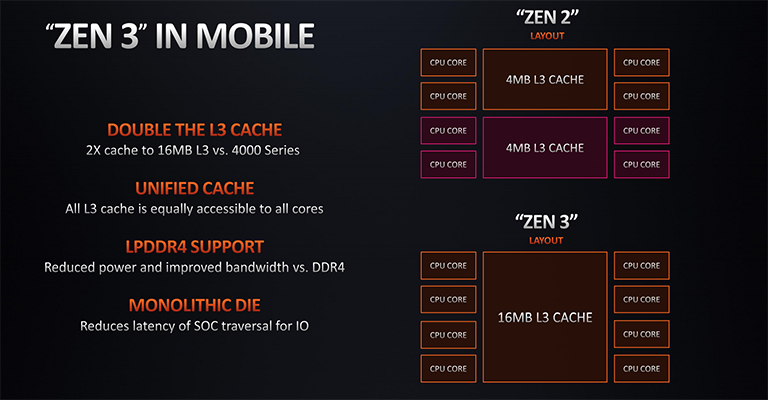 We have documented Zen 3's instructions-per-clock (IPC) benefits before. The sum of the changes over Zen 2 offers, clock for clock, a 19 per cent advantage. In keeping with the desktop implementation, Zen 3 is housed in a monolithic die where each core has access to double the L3 cache as before, reducing latency and increasing real-world performance in practically every workload.

Driving down power is paramount from one generation to next, and it's an area where AMD has spent engineering focus. In particular, the memory-controller portion can be considered a power hog as it remains active (and draws power) when the SoC is in any active state. Being able to reduce this continuous draw is a clear opportunity for considerably extending battery life in many low-power applications. 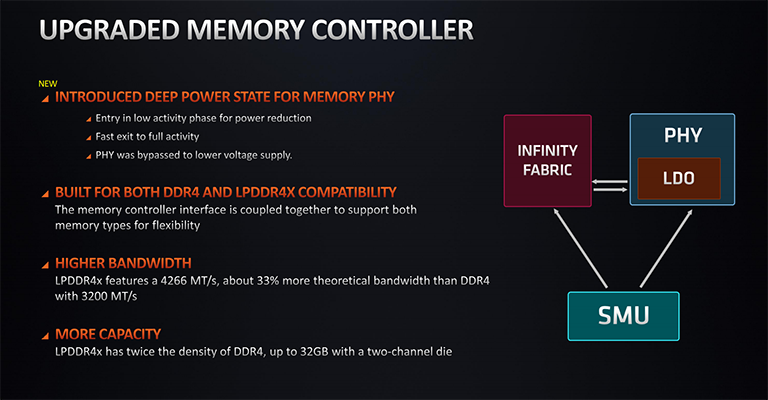 In Ryzen 5000 Series Mobile, during light-load applications the SoC places the memory physical layer (PHY) into a deep, low-power state by moving the juice for DDR4 memory to a more efficient, lower-voltage supply and by also turning off the voltage regulator hooked up to the PHY. Along with myriad of other power optimisations, the benefits are most keenly felt when SoC is doing very little - idling or web browsing - as non-essential power is reduced by a large degree compared to last-generation Renoir.