The original Surface Go launched back in summer 2018 so is very much due an update. This is the budget end of the Surface portable convertible range which mimics the Surface Pro functionality but with a smaller screen and entry level processors and supporting components to hit a price point ($399 last time).

A few weeks ago HEXUS reported upon the spotting of the Surface Go 2 in FCC documents, and in February we saw purported specs shared. Now, sources in contact with WinFuture.de have shared some new photos and details about the Microsoft Surface Go 2. 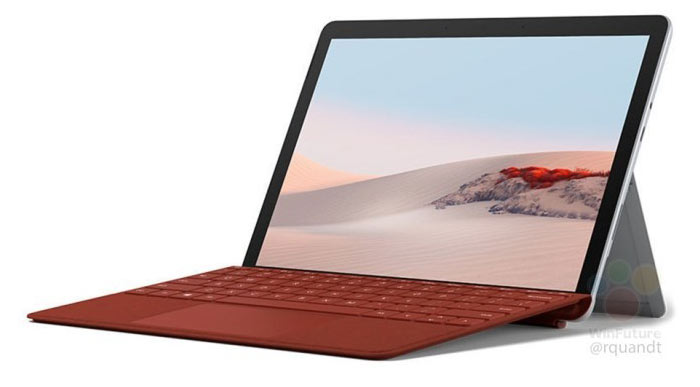 One of the major changes to the Surface Go 2 is the provision of an enlarged screen - while retaining the chassis of the previous version. This is an important move and builds the appeal of the new device by allowing previous gen owners to take over accessories, and opening up second hand accessories from the outset to new device users. WinFuture says that while old keyboard covers are compatible, Microsoft will launch four new ones alongside the refreshed tablet, in Ice Blue, Poppy Red, Platinum and Black.

Internally there will be some updates as well of course. Buyers will be presented with three Surface Go 2 configurations. The entry level model (€459) is said to come with an Intel Pentium Gold 4425Y processor, 4GB RAM, and 64GB eMMC storage. Moving up a notch there is the Intel Core m3-8100Y powered device, with 8GB RAM and a 128GB SSD (€629). At the premium end, and perhaps not available straight away alongside the other choices, the Core m3-8100Y rides again but is joined by a larger SSD (256GB) and has LTE built-in (pricing unknown). All of the devices have Wi-Fi 6 as standard.

According to WinFuture's Roland Quandt, Microsoft's Surface Book 3 will launch later today. More details on this launch will be in the HEXUS news section as it becomes available.

Not much to shout about is it? lol
Posted by gagaga - Wed 06 May 2020 14:53
Bezels are fine. You need somewhere to hold it. It's also needed to work with the surface keyboard unless they change how that connects to the device.
Posted by [GSV]Trig - Wed 06 May 2020 16:37
And just so happens this is announced the same day the youngest says she needs a replacement for her Surface 3….