Apple has today delivered an update to its 13-inch MacBook Pro laptop. The headline feature of introducing the new Magic Keyboard could instead be described as fixing a design flaw, after all the criticism the butterfly design has received. Other than that, there is the predictable move up to a 10th gen Intel Core quad-core processor "for up to 80 percent faster graphics performance," as well as double the base/max storage. 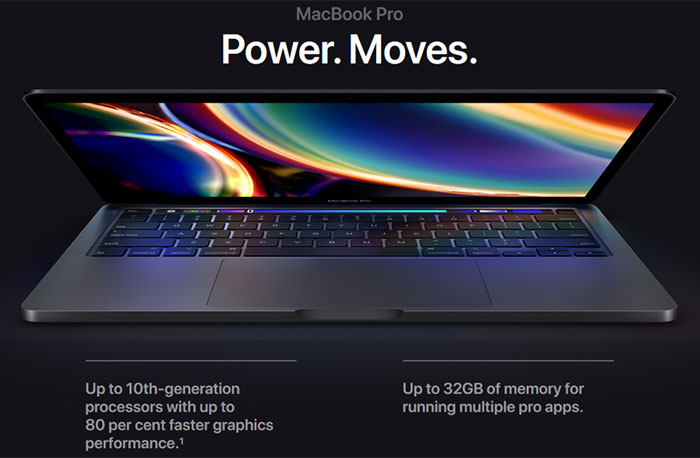 Apple updated its larger MacBook Pro 16 late last year and moved away from the troubled butterfly type switches, introducing the Magic Keyboard with scissor switches (with 1mm key travel) and new improved Touch Bar with physical Esc key and finger print sensor built into the power key on the opposite side of the deck. The same process has been enacted on the MacBook Pro 13. Apple's MacBook Air got the MagicKeyboard (and 10th gen Intel CPU) treatment back in mid March). Now there is no current Mac laptop with a butterfly mechanism keyboard. 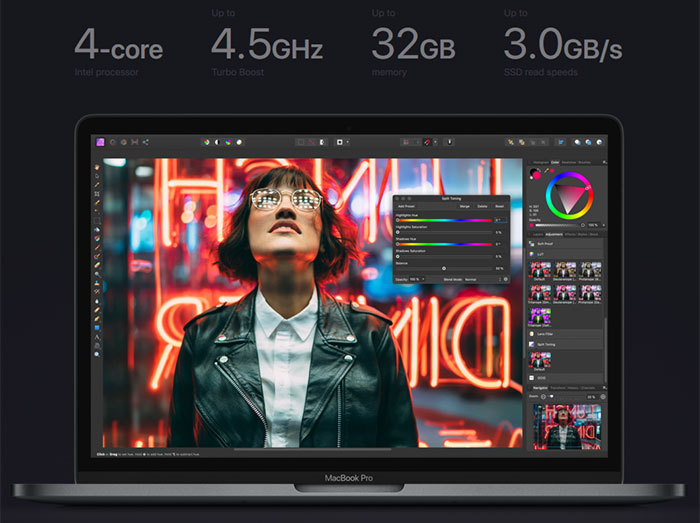 With Intel's latest quad-core processors inside, Apple is touting a performance hike of up to 2.8 x compared to the previous gen (dual-core) MacBook Pro 13. The processors offer Turbo Boosts up to 4.5GHz. Moreover, Apple boasts that the "integrated Intel Iris Plus Graphics deliver up to 80 per cent faster performance over the previous generation 13-inch MacBook Pro for 4K video editing, faster rendering, and smoother gameplay". If you have an Apple Pro Display XDR at hand you can now drive that at full 6K resolution. 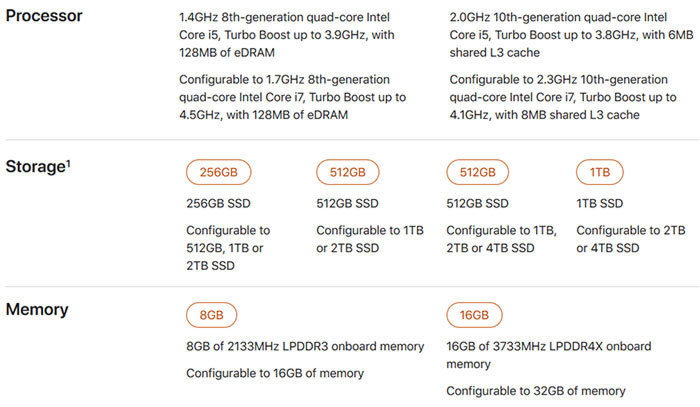 Please note that of Apple's four new MacBook Pro 13 models, a pair of them pack the older 8th gen Intel Core processors (still quad-core models), accompanied by LPDDR3 RAM, and there is another important difference in port selection, mentioned below.

New users will benefit from more and faster memory and storage options. Firstly the RAM fitted will be a minimum of 16GB @3,733MHz, with an option to kit out 32GB in the new 10th Gen Intel models. Standard storage is 256GB to 1TB but the MacBook Pro 13 can be configured with up to a 4TB SSD with read speeds up to 3.0GB/s. 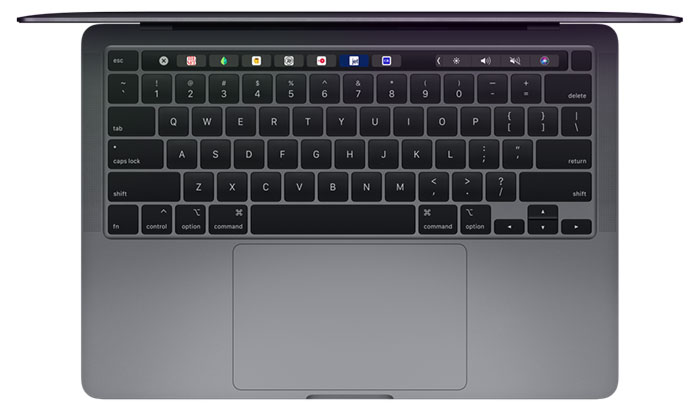 Here in the UK the entry price for updated MacBook Pro 13 ownership is £1,299. There are four pre-built configurations on offer, priced at up to £1,999. The laptops are available in a choice of silver or space grey and the earliest delivery slots are from 7th May.

Posted by philehidiot - Mon 04 May 2020 20:33
I really do like them and they are desirable. But I've said it before and I'll keep saying it. Apple treated me like absolute scum when I had an issue with a machine costing over a grand and their Apple care warranty. I went into their shop to address the issue and the guy told me that the faulty part and proof of purchase wasn't good enough and I had to bring in the whole laptop (with serial number) for them to even talk to me. He then turned away and walked off after about 20 seconds of talking to me. Their online customer service never responded to my email.

I'd accept that if I'd bought a cheapo machine like an EeePC or something where costs were cut all over the place. I had splashed out on a very expensive bit of hardware complete with extended warranty. And they made it a pain in the rear to get a simple, faulty PSU changed.

When you're spending, in this case, £1300, it becomes an amount of cash where risk comes into play. I will not risk, given Apple's conduct in the past and how they treated me in person, that much money to a company which doesn't want to know when it goes wrong.

The guy who shunned me had just looked up the last customer's details and so on using the iPad in his hand. He could easily have confirmed everything right down to the card used to pay but he just basically told me “screw you”.

So, I'm sorry Apple. I don't care how great your products are. I love your fancy touchbar but it's not worth me risking thousands if you're not going to support your product and me when it all goes wrong.

Interestingly, I contacted Alfa's customer support recently and they are just helping me. It was an expensive network adapter and they're supporting it. Leatherman will often just send you a new version of the entire multitool is part of it breaks, even if it's just a simple spring. BMW are supporting cars which are around ten years old with newly discovered faulty airbags to the point where even if it's a second hand owner, they'll pay for taxis and recovery to a BMW garage for the issue to be resolved. High end, expensive brands need high end support. Apple doesn't provide that so they can sod off until they get the message. If they hadn't done this to me, I'd have bought at least one more of their expensive laptops by now and probably an iPhone as well.
Posted by Xlucine - Mon 04 May 2020 21:03
All that money for a “pro” machine, and no 8 core CPU?
Posted by philehidiot - Mon 04 May 2020 21:38

I think my last VM got allocated more resources than this thing comes with. And I'm a complete amateur. Anandtech described their last pro CPU AMD vs Intel review as a “bloodbath” as Intel just got crushed.
Posted by CaptainAmerica - Tue 05 May 2020 01:39

There hasn't been anything pro about a MacBook in a very long time
Posted by rob4001 - Tue 05 May 2020 02:17
I really don't think apple care about there macbook division. Tim Cook is a total ahole he's lost focus chasing streaming revenue. He's just milking the tech hipsters with Macbooks. I have a 2013 macbook pro the last reasonably priced one . Still works great but I will not be getting a new one once it break or software support ends.