At CES 2020 Asus has launched quite a wide selection of PCs and accessories for business, creators and gamers – plus some Wi-Fi network products. A lengthy blog post at the Asus Edge Up site outlines most of its new offerings from the show floor. Amongst the large array of appealing new products the new ROG Zephyrus G14 is particularly newsworthy and eye catching. Dear reader, I will tell you why...

If you remember back to the original Zephyrus it was indeed a category redefining laptop and was amongst the first portables to feature Nvidia's portable Max-Q GPU refinements. At CES 2020 Asus claims to have broken the mould again with "an ultraportable gaming powerhouse," called the ROG Zephyrus G14.

If you see images and / or videos of the new G14 one of the first things that you will notice is the top lid LED display matrix composed of 1,215 LEDs. This first gen G14 uses white LEDs which can be customised, controlled for unique animated and stationary designs – or even visualisations that react to music and sounds. Asus dubs the half diagonal lid display the 'AniMe Matrix'. 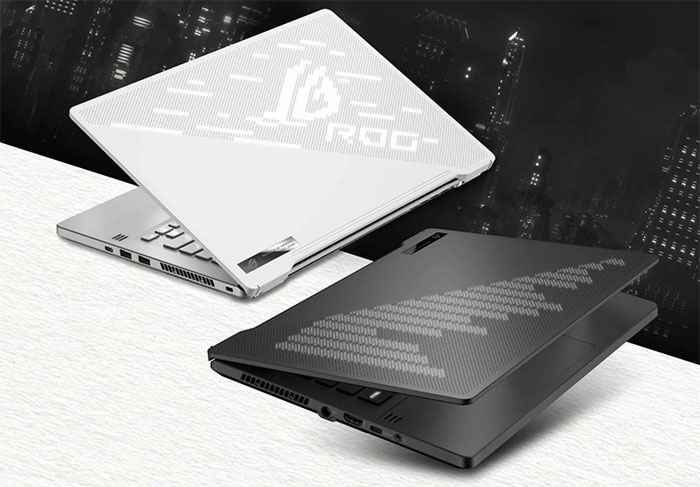 The 14 in the name alludes to the screen diagonal, and thanks to Asus going for this slightly smaller than typical screen size for a gaming laptop it is claimed to gain a disproportionate amount of portability. Firing some numbers at you; the magnesium-aluminium bodied G14 is just 17.9mm thick (and 324 x 222mm), and weighs in at 1.6kg so it is quite easy to carry around and pack in a bag – but packs considerable power under the bonnet, as you would demand in a gaming laptop.

Still on the topic of the screen, Asus is providing three options here; a 60Hz and 120Hz refresh rate FHD IPS display, or one with a WQHD 2560×1440 resolution at 60Hz. All three options are Adaptive Sync capable and Pantone calibrated. Opening up the dispay clamshell invokes the Ergolift hinge helping the cooling system air flow. 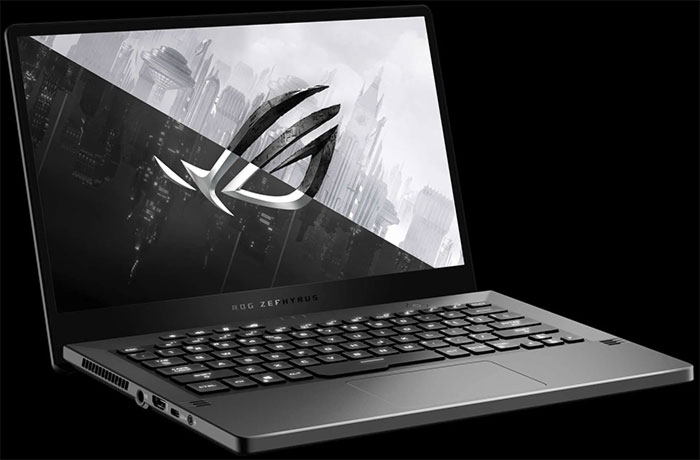 Moving inside, a highlight of the Asus ROG Zephyrus G14 is that it is among the first to be launched packing one of the new Ryzen 4000 Series mobile APUs. Not just any of the range either, Asus specs it with up to the 8C/16T AMD Ryzen 7 4800HS. This is a version of the 4800H specially formulated for Asus. It has a slightly reduced TDP from 45 to 35W but I am not sure what else is different.

In addition to the integrated GPU you will also be deciding on a discrete offering from Nvidia – up to the GeForce RTX 2060 Max-Q. Other specs are pleasing for a portable too; up to 32GB of DDR4 3200MHz RAM, up to 1TB of NVMe PCIe storage, integrated WiFi 6 and Bluethooth 5, twin top mount speakers with twin tweeters, 1.7mm travel chiclet keyboard with backlighting, full sized HDMI port plus a range of USB ports – one which doubles as a charging port to deliver 10 hours of battery life.

The new ROG Zephyrus G14 will become available in March, and there is a new 15-inch Zepyrus on the way too. The G14 will be priced starting from about $1,300.

deepblue08
Finally, some gaming laptops that don't look like my Christmas tree.

But you could make it if you want…. lol
Posted by Ttaskmaster - Wed 08 Jan 2020 11:37
Yay, more flashy gimmicky junk… Kinda reminds me of sci-fi films where futuristic taxis have animated adverts and scrolling messages displayed, seemingly right on the paintwork.

3dcandy
But you could make it if you want…. lol

Just as you could make the other products not look like one.