We saw quite a few leaks featuring the AMD Radeon RX 6600 in September. As well as retail leaks, with indicative pricing, we got to check out an official looking specs sheet comparing the new lowest-rung RDNA2 graphics card with its beefier brethren. Now, as we are apparently just a week away from a touted official launch date, VideoCardz has shared an article in which it says it has confirmed the final specs, the launch date – and some "AMD official (in-house) testing results". 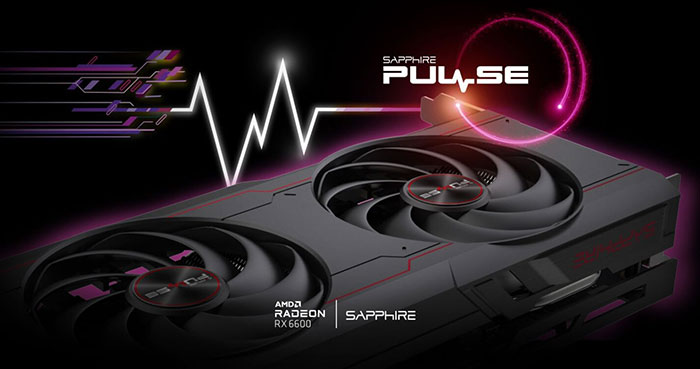 To recap, the Radeon RX 6600 specs, before we go further. This GPU is a lot like the RX 6600 XT that has been through the HEXUS labs in numerous guises, the one major change is its core count (reduced from 2048 to 1792), its game/boost clocks are somewhat slower too, but it has a correspondingly lower TDP, cut from 160 to 132W. There is no change to the 8GB GDDR6 memory subsystem. Similar config mobile GPUs have been available already for some months – the Radeon RX 6600M and Radeon Pro W6600. 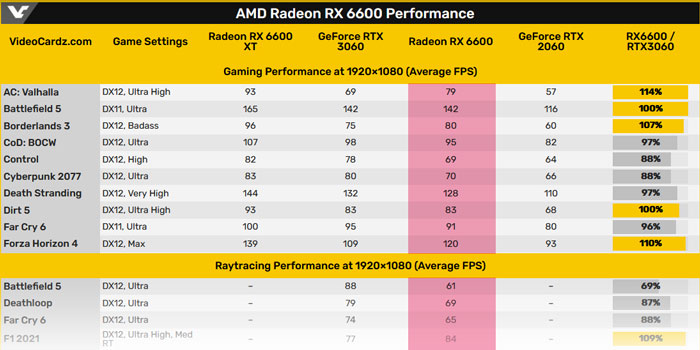 The purported official benchmarks include sections for AAA gaming, eSports titles, and Raytracing-on titles. I've just included a section of the results above, and you can check the source for fuller comparisons. AMD's test system was based on a Ryzen 5 5600X with either AMD Smart Access Memory or Resizable BAR enabled.

It is interesting to see the GeForce RTX 3060 and previous gen RTX 2060 in the comparisons. Nvidia has yet to release Ampere generation desktop cards such as the RTX 3050 and RTX 3050 Ti, which have been an established choice in laptops for several weeks now.

Rumours suggest the Radeon RX 6600 will be unveiled on 13th October.

Corky34
:yawn: :sleep: Wake me up when AMD and/or Nvidia manage to make a GPU that costs under £300 that they can keep in stock at MSRP.

I can't be the only one who's given up looking for a graphics card and new games.

Corky34
:yawn: :sleep: Wake me up when AMD and/or Nvidia manage to make a GPU that costs under £300 that they can keep in stock at MSRP.

I can't be the only one who's given up looking for a graphics card and new games.

Me too, sticking with my rx580 until if ever they come close to msrp if not then will switch to console and bury my pc in the garden.