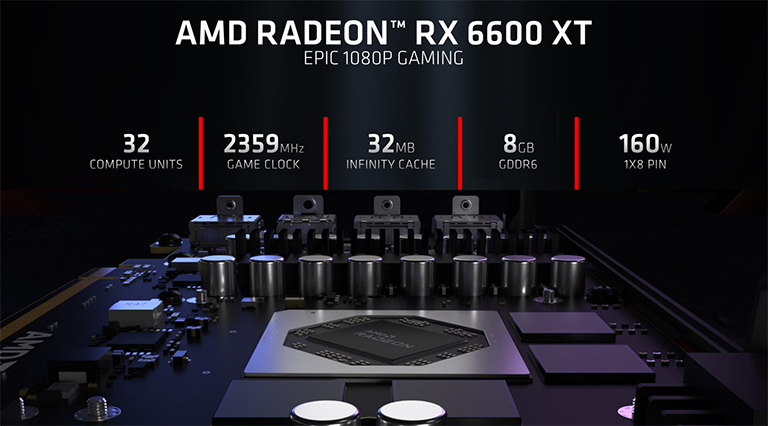 Following on from the initial reveal last week, today we can examine the performance credentials of AMD's newest desktop GPU, the Radeon RX 6600 XT.

Let's first go over some familiar ground by examining the card's vital specifications in a bit more detail.

AMD uses what is known as the Navi 23 die for this card. Purposely designed for the mid-range segment, the 237mm² footprint and 11.1bn transistors is comfortably smaller than Navi 22 present on RX 6700 XT. Unlike previous generations where AMD has adopted a desktop-first strategy, this silicon is already present in the laptop-optimised Radeon RX 6600M GPU and will be present, in a similar form, on the infotainment systems in upcoming Tesla cars.

Back on track, there's nothing startling here. A reduction in transistors is met by commensurate cuts in horsepower. RX 6600 XT follows the same general configuration as other, more powerful Big Navi cards, so 32 compute units provide 2,048 shaders, an associated 128 texture units, and one raytracing accelerator per CU.

The biggest hit, arguably, is to the Infinity Cache, which drops from the 96MB present on the RX 6700 XT to just 32MB here. AMD says the card's 1080p sweetspot doesn't require a heap of Infinity Cache, but we have reservations because the board memory throughput is relatively weak. You see, this card carries a 128-bit bus allied to 8GB of GDDR6 memory operating at 16Gbps, leading to only 256GB/s of potential bandwidth.

Zooming in on the Infinity Cache, it works by having eight 4MB pools connected to each 16-bit memory controller. This aspect is crucial into understanding that it's not only lower in capacity than, say, the bigger Navi 21 and Navi 22, having fewer channels and a lower peak speed of 1.8GHz reduces bandwidth to around 922GB/s. Compare this with the 1.94GHz clocking and 16 channels available on the RX 6800, which leads to almost 2TB/s.

We therefore expect the memory subsystem to struggle quite a bit at QHD and UHD resolutions... our benchmarks will reveal all. 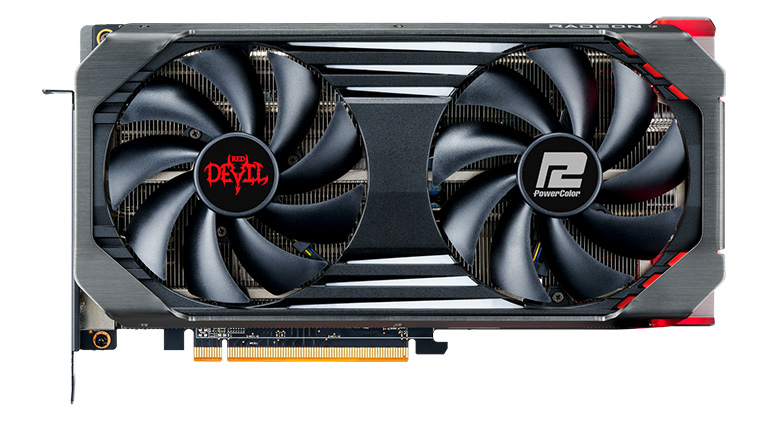 AMD also cuts the GPU-to-PC interface in half, to PCIe 4.0 x8, though this will not have much impact upon performance. Scaling down the die and power-burning components offers a 160W total board power. There is no Made By AMD reference board for this generation and we expect partners to release multiple models spanning the 160W-200W range. Hopefully most will make do with a single 8-pin power connector, though we're sure, in typical gusto, some will opt for a 300mm board with dual 8-pin.

There is no cryptomining limiter present on the Radeon RX 6600 XT, yet if you appreciate that crypto performance is driven by having oodles of memory bandwidth, it is unlikely this GPU will be a good fit for mining rigs. Technologies such as Smart Access Memory and FidelityFX Super Resolution are naturally supported.

Then there's price. AMD says the base SEP is $379 or £329.99 over here, with a decent supply of stock. If true, it puts this GPU on a fiscal collision course with rival Nvidia GeForce RTX 3060 ($329) and RTX 3060 Ti ($399). Of course, such paper comparisons only work if there are partner cards available at these prices, and we'll find out later on today if AMD has indeed managed to get enough silicon to partners.

Primed for high-framerate 1080p gaming first and foremost, the Radeon RX 6600 XT takes an interesting route to design. Let's now see just how well AMD's performance claims stack up as we look at a PowerColor board.