AMD released the Radeon RX 6600 XT GPU to combat lower echelons of the GeForce RTX 30-series family. Imbued with the latest RDNA 2 architecture touting hardware-based raytracing, stock has slowly but surely surfaced and ASRock is looking to carve out a name for itself by releasing what it believes to be the best iteration going. Let's therefore examine the Phantom Gaming D 8GB OC model. 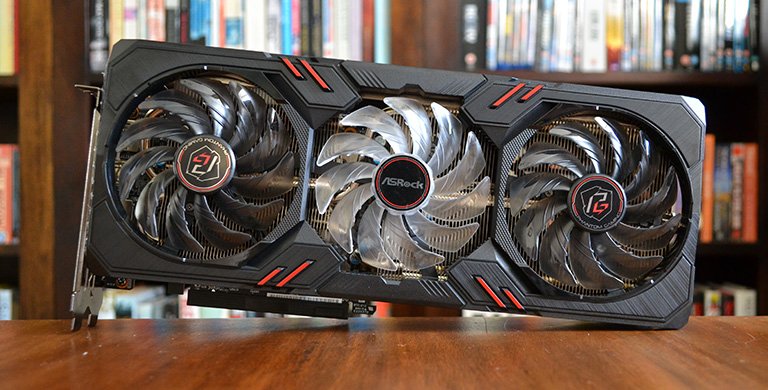 ASRock is of the opinion that cooling needs to be as large and capable as possible because most users will install a single card into a regular chassis. This philosophy translates to a 304mm length, 131mm width and 48mm height. ASRock defines this as a 2.4-slot offering, though do be aware it effectively blocks off the third slot unless you use a very thin card next to it.

Build quality is generally good throughout. ASRock uses a different-coloured central fan for promoting PolySync-controlled RGB, as the central spinner is backlit, along with the Phantom Gaming logo on the side. Unlike some premium solutions, there is no auxillary connector for synchronised LED effects via the motherboard, but ASRock does a fine job on the fan-tuning front. The trio switch on at around 50°C and ramp-up smoothly. There is none of the sawtooth pattern found on some of the competition. 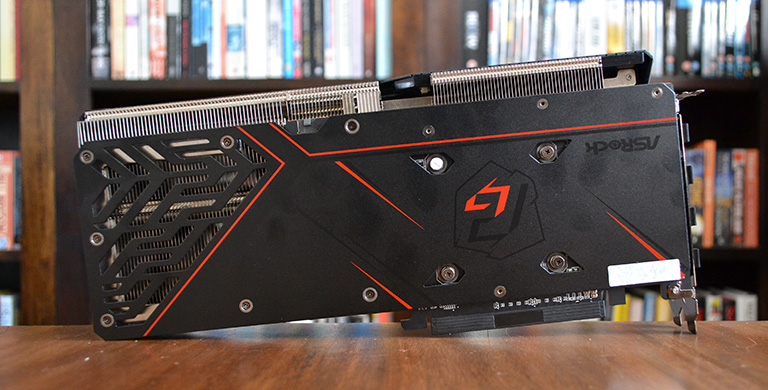 A full-length metal backplate is a nice touch and it does aid cooling as thermal pads exist between it and the PCB. Speaking of which, the board ends about two-thirds the way along, by the solitary eight-pin power connector, so the Phantom Gaming uses remaining space for through-the-heatsink cooling.

There's no second BIOS but that's understandable on the RX 6600 XT GPU.

Here is where you can see what could be a mini-ITX card morphed into a full-on 900g monster. ASRock does well by ensuring the heatsink also cools the 8GB of GDDR6 memory as well as the VRMs. Thermal pads are in all the correct locations, too.

ASRock specifies a boost clock of 2,607MHz, which is very marginally faster than the 2,589MHz mandated by AMD. Calling this an overclocked card is accurate, yet the uplift is so small that it's barely noticeable on a spec sheet. Our logs show it boosts to around 2,620MHz in real-world gaming load.

Three DisplayPort and a single HDMI are standard fare on modern cards. Now to the issue of price. At the time of writing, the card was showing as available at £470. That's some way above supposed MSRP, but the very fact that it's able to buy is, in these times, considered a plus point.

ASRock backs it up with a two-year warranty that feels a bit stingy given the original outlay.