Nvidia's Deep Learning Super Sampling has been a major feature in gaming graphics advancement over recent years. We got our first taste of DLSS technology about three years ago, but it was significantly refined with DLSS 2.0 in March 2020; and RTX GPU owners got 8K gaming, VR support and more with DLSS 2.1's introduction in September the same year. Of course, AMD has jumped on the new technology super sampling bandwagon with its FSR, and Intel announced XeSS upscaling technology recently, to whip up excitement for its Arc Alchemist GPUs coming early next year. 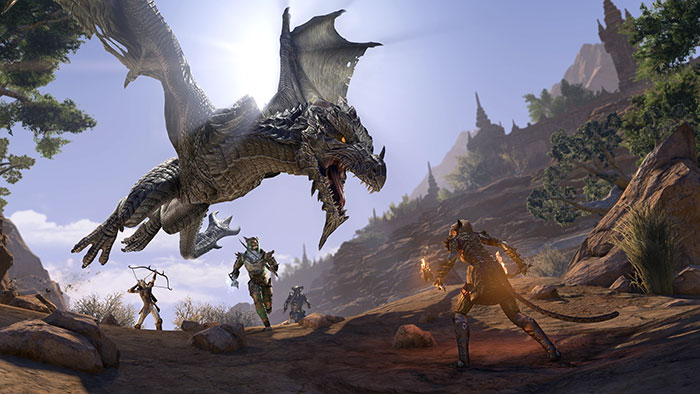 This is where we are now, but what if a game is already performing great without the need for tech tricks like DLSS, FSR or XeSS? Such is the case with Elder Scrolls Online, a 2014 MMO game which is still popular and being maintained by its developers. If you have a powerful modern gaming PC you will already be able to run ESO at 4K, with 120fps+ if you wish – so the developers got to thinking whether they could apply DLSS technology without the upscaling – rather for the "fantastic AA quality" at full native resolutions. After some chat with Nvidia, such a solution got the green light and Nvidia Deep Learning Anti-Aliasing (DLAA) was born.

Nvidia hasn't got around to writing a blog post, developer post, feature video or any such niceties to outline DLAA to its various audiences, so all we have now is a trio of Tweets from ESO developer Alex Tardif. Mr Tardif says that as well as implementing DLSS for the game's fall content update, the game engine will use DL technology for anti-aliasing. "On RTX cards people run ESO at high fps already, so a pure AA option works well," summed up the ESO dev. Tardif goes on to thank Nvidia for letting interest and support in "this hijacking of their DLSS tech into its own thing". The use of this tech in ESO makes sense, and is probably not something for every game, the developer reminded us.

DLAA therefore isn't a 'performance' option, as it is expected to be more taxing than standard TAA technologies – it is a quality setting, that if your hardware is up to it, you will probably wish to apply. As is the case for DLSS, it is pretty certain one will need an Nvidia RTX series graphics card to make use of DLAA.

Posted by Tabbykatze - Mon 20 Sep 2021 10:13
Highly doubt it was just due to ESO and it was likely already on the cards but waiting for the question of if it's worth doing or, more likely, when competitor solutions have made DLSS a somewhat moot point so they need something else to show an edge.

*cynic hat mode as this is business…and it's Nvidia*
Posted by kalniel - Mon 20 Sep 2021 12:06
Now this is more like a good use of DLSS :D It shouldn't require much extra work from NVidia so I could well imagine them responding to a developer request. I'm only surprised it's taken until now for it - I'm pretty sure people here were talking about similar way back when DLSS was first mooted.

I “only” have a 3800X and a GTX 1080, but under certain circumstances the game runs at 100+ FPS. What's necessary is enabling the beta Multi-threaded rendering setting (yeah, they only just implemented this) and being in an area without too much going on (ie. not in a town etc.).

BTW, considering the quite recent introduction of multi-threaded rendering (which helps tremendously) comments about running the game in 4K@120+ FPS sound like wishful thinking. Well, more like a fib, actually. Before this new feature you could barely get 30 FPS at WQHD with a bit of action going on.