Last week, Intel's data deluge shared during its Architecture Day was welcome but certainly needed time to digest. The presentation was over two hours long, and one of the PDFs we received from our contacts at Intel was 195 pages long. As the dust is still settling, Intel VP and GM of Client Graphics Products and Solutions, Roger Chandler (also a presenter in the video) has shared a carefully drawn outline of Intel Arc high-performance graphics, dubbed The Next Chapter in our Graphics Story, on publishing platform Medium.

Chandler's post is quite comprehensively covered by the HEXUS articles last week; Intel provides sneak peek at Xe HPG and Xe HPC GPUs, and Intel XeSS upscaling technology demonstrated and discussed. However, by intention or happy accident, we get a little more insight into the upcoming lineup, their capabilities, and the all-important software that brings out the best of the hardware. 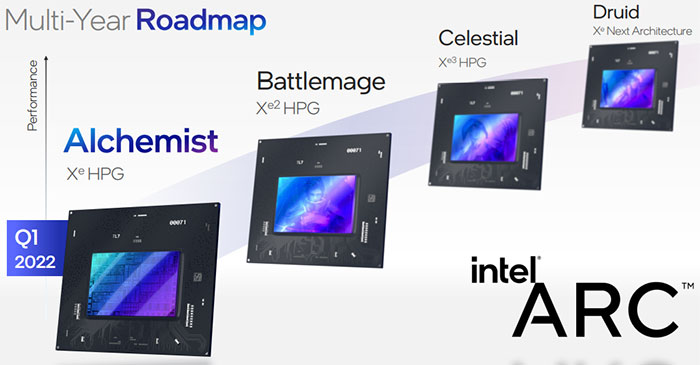 In the Medium post, I found it most useful that Chandler highlighted Intel's intentions to stick with Intel Arc as a going concern for multiple generations. It looks like, after the initial splash made by Arc Alchemist with Xe HPG in Q1 2022, we will get at least four years of updates with Druid based on Xe Next Architecture at the end of the roadmap as far as it has been shared.

Chandler also took time to recap the way in which Arc Alchemist graphics card SKUs will be devised, the capabilities of the underlying architecture, and again highlighted the qualities of XeSS.

Probably the most interesting part of Chandler's blog concerned software, as it touched upon new information. Seasoned HEXUS readers will be all too aware of the importance of drivers, with both red and green teams having been though rough patches, lessening the appeal of great hardware in the past. So it is important to know Intel won't stumble in this regard.

Last week, Lisa Pearce seemed to be assuring us that all was well on the software front, from multiple angles. Chandler adds some more info, saying that Intel's close work with Microsoft over the last three years with DX12U have been rewarding, and hinting that the blue team could become a technology leader in some areas.

Last but not least, Intel has rationed overclocking ability with its CPUs in recent years – limiting the ability to OC processors, with locked multipliers in all but its 'K' series. It appears to be the case that Intel Arc will storm forth without any such brakes on enthusiast tinkering. "We’re even integrating overclocking controls into the driver UI to give enthusiasts the tools they need to push the hardware to the limit," wrote Chandler on Medium.

Posted by cheesemp - Wed 25 Aug 2021 14:29
Intel's drivers are my biggest area of concern regarding getting an Intel GPU so here's hoping they have done something about it. For all people's issues with AMD/Nvidia drivers at least they feel well supported. I've never felt the same about intel where they practically feel stuck in time from release with only minor fixes.
Posted by Rubarb - Thu 26 Aug 2021 14:00

cheesemp
Intel's drivers are my biggest area of concern regarding getting an Intel GPU so here's hoping they have done something about it. For all people's issues with AMD/Nvidia drivers at least they feel well supported. I've never felt the same about intel where they practically feel stuck in time from release with only minor fixes.

Thats actually a great point, I guess time will tell but I have a feeling you could be right.
Posted by watercooled - Thu 26 Aug 2021 14:50
Yeah I must say I share that concern. You would think a company with Intel's resources would allocate enough of them to sorting out their drivers, but in my experience that doesn't appear to be the case with their current products. I've had quite a few problems up to and including BSODs.

Here's hoping a major push into discrete GPUs is enough of a motive to step up their game in the driver department. After all, GPU drivers are fantastically complex pieces of software. Neglecting them could make an otherwise attractive GPU quite worthless.
Posted by Yoyoyo69 - Thu 26 Aug 2021 15:30
We're stuck between Nvdia and AMD trying to fix prices (Intel wouldn't be any better if they had any say) and gambling on Intel actual supporting a product, “if” they can actually create a competive product.

Which devil do you go with?
Posted by watercooled - Thu 26 Aug 2021 16:14
Whilst they're ostensibly limited by fab capacity, AMD are likely concentrating on the more profitable CPU silicon at the moment, so volume-wise aren't providing much competition for Nvidia.

That's somewhat unique to AMD though as they share fab capacity between CPU and GPU, Nvidia just have to concentrate on their GPUs, and Intel will be producing GPUs at TSMC so again, not competing for capacity internally.