During its Architecture Day event earlier today, Intel's GPU software team leader Lisa Pearce discussed the core driver, APIs and Engines, and Experiences users can expect with Intel ARC Alchemist GPUs. In the presentation embedded below, Pearce's segment starts at 3 mins and 25 seconds (it includes some games engine and demo footage too).

Intel is following a 'software first' strategy with Arc Alchemist, according to Pearce. Below you can see the tangents this brings together, which is all well and good, but probably the most interesting part of the presentation focussed upon a feature called XeSS. 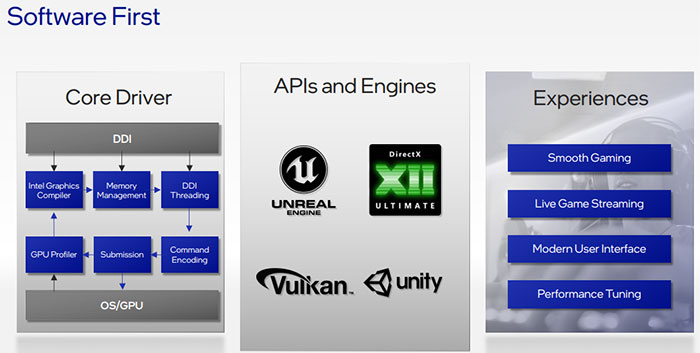 XeSS is an abbreviation of Xe super sampling, and in case you are still not aware of what this is – it is Intel's take on next-gen upscaling tech – a rival to Nvidia DLSS and to AMD FSR.

Intel has some bold claims for its XeSS technology as demonstrated in some Unreal Engine 5 scenes, namely that 1080p source material upscaled to 4K using XeSS "gives the same quality image as native 4K". The screens in the video demo make it look really good, and we also see magnified comparisons showing how grainy the 1080p source can be.

So, how does XeSS work? Above, we mentioned that this Intel upscaling tech is more similar to Nvidia's efforts, as it makes use of dedicated AI processing on the GPUs (the XMX Ai accelerators). Specifically, Intel says XeSS "uses deep learning to synthesize images that are close to the quality of native high-resolution rendering". This doesn't create as much GPU work as native rendering, so you can run games at higher-quality settings and higher resolutions.

Some useful bullet points provided by Intel to outline XeSS are reproduced below:

Last but not least on the topic of XeSS, several game developers are engaged on implementing XeSS in their projects, according to Intel. From the video above, you know it is being integrated into Unreal Engine, for easy adoption. The SDK for the initial XMX version will be available for ISVs this month, with the DP4a version available later this year. 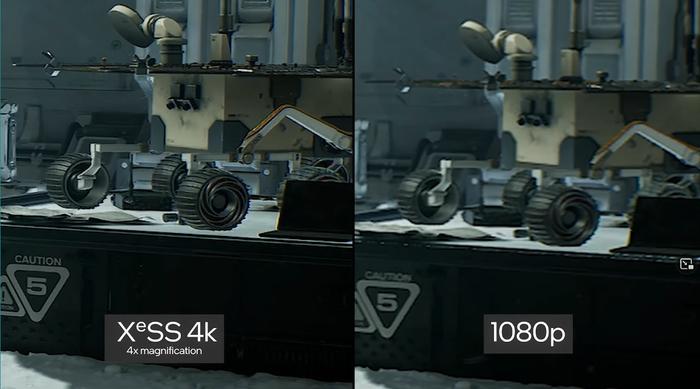 At first glance XeSS looks impressive but as is always the case the proof of the pudding will be in the eating, and we must reserve judgement until expert third parties can dabble with Intel's exciting new Arc Alchemist graphics cards with XeSS enabled in shipping games. It would be particularly interesting to see it compared in games that feature real-time ray tracing and Nvidia DLSS 2.x, for example.

Specifically, Intel says XeSS "uses deep learning to synthesize images that are close to the quality of native high-resolution rendering"

For once Intel marketing is being honest,unlike Nvidia who needs to keep saying DLSS “is better than native” when native is an image softened with TAA,etc! ;)
Posted by watercooled - Thu 19 Aug 2021 16:04
That is my bugbear with DLSS. Not the system itself, but the way it is marketed, and the dubious comparisons posted online, even by ‘reviewers’. It is a very competent upscaler, why not just call it what it is? The claim that it ‘improves performance’ at a given render resolution is untrue and really irks me, but doesn't stop it being parroted online.

DLSS *adds* workload at a given render resolution, not subtracts it. Not at all unexpected given the process involved. 1080p running with DLSS is obviously slower than 1080p running without it. And no, I obviously don't mean a game rendered at 720p the upscaled with DLSS to 1080p.
Posted by CAT-THE-FIFTH - Thu 19 Aug 2021 17:16
https://www.youtube.com/watch?v=-7HjPyrCGME

It will work on AMD and Nvidia GPUs as well.

So its a software solution that unlike FSR that uses one frame it uses early frames and direction of travel to construct an upscaled image, but if you have there hardware you get even better performance?

I wonder if Nvidia will suddenly appear to have found a way to give everyone DLSS without the tensor cores being needed?