A Facebook user has shared photos taken of MSI packing boxes in transit from Hong Kong to the USA. LokLok shared the images on Saturday and it is thought that the photos were taken at or near an MSI transfer warehouse in Sheung Shui, HK. It is easy to read that, among the various models of graphics cards seen packed up and ready to go, there is a carton full of MSI GeForce RTX 3080 Ti Ventus 3X 12G OC cards. 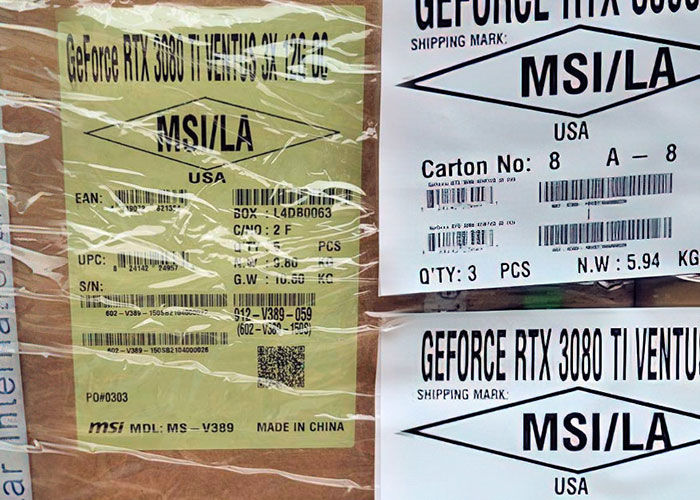 Above you can see the labels on one paletted box which contains a mix of RTX 2090 and RTX 3080 Ti graphics cards from MSI. Below you will see that MSI is also shipping what appears to be a large quantity of Nvidia GT 710 2GD3 LP graphics cards, as well as several cartons of the MSI Radeon RX 580 Armour 8G OC. I've seen lots of pre-builts recently sporting the GT 710, paired with one of the iGPU-less Intel 'F' suffixed chips or Ryzen desktop CPUs. I find it a bit more surprising to see quantities of RX 580 graphics cards shipping, even though they are much more capable than the GT 710 parts. 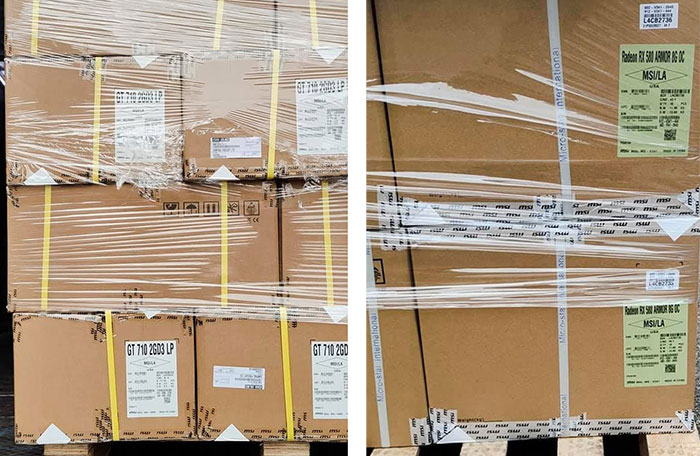 The latest rumours about the finalised specs of the GeForce RTX 3080 Ti indicate that it will ship with a GPU packing 10,240 CUDA cores, 80 RT cores and 320 Tensor cores. The pictured packaging shows that MSI's Ventus 3X 12G OC is overclocked compared to reference and confirms this model will pack 12GB of memory, expected to be GDDR6X on a 384-bit interface. The GPU spec is just a whisker off that of the RTX 3090, but it has half the memory of its bigger brother.

Look for the GeForce RTX 3080 Ti graphics cards launch in May. It was designed to fit in a sizable price gap in the GeForce line and to compete against the Radeon RX 6900 XT at the $999 MSRP mark. All new and refreshed GeForce graphics cards should come with new 'mining algorithm limit' systems applied.