Nvidia Reflex technology has become available for players of Overwatch, as long as they own the requisite hardware*. Using modern Nvidia hardware, with a fast display and the latest Game Ready driver gamers can expect system latency to be reduced by as much as 50 per cent in this popular competitive title.

In its blog post highlighting the Reflex / Overwatch news, Nvidia reminds us that in competitive eSports titles like Overwatch spit second reactions are often the difference between victory and failure, and between (virtual) life and death. Reflex delivers some big benefits in this arena, allowing gamers to "acquire targets faster, react quicker, and increase aim precision," as you can see evidenced in the screen-grabs reproduced below.

Turning on Nvidia Reflex is easy. For the Overwatch live game please make sure that both the game and your drivers are the newest versions and then head to the in game options > video settings > and toggle Nvidia Reflex on. If you wish to optimise further, to sharpen your competitive edge, Nvidia has a guide that you can follow to reduce system latency further. This guide walks you through lots of settings beyond game and graphics driver and is worth a look if eSports success is very important to you. 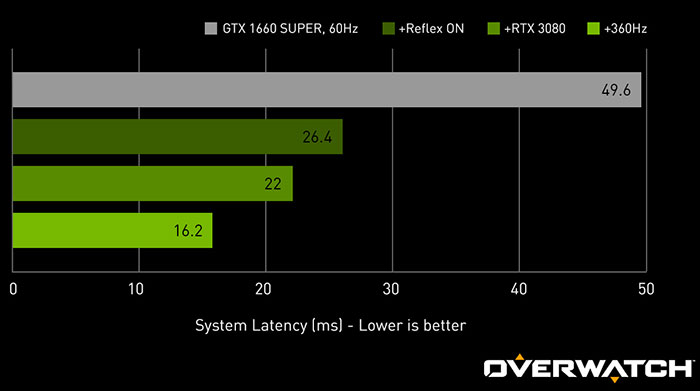 *To use Nvidia Reflex and benefit from latency improvements in GPU-intensive games you should be packing an Nvidia GeForce GTX 900 Series or newer GPU. Nvidia says that with popular mid-range cards, like the GeForce GTX 1660 Super, gamers can expect up to a 33 per cent improvement in PC responsiveness with Reflex. Faster cards and displays deliver increased benefits as you can see from the video / charts above.

Posted by ik9000 - Wed 07 Apr 2021 12:53
that chart lacks the latency in obtaining any “compatible modern hardware”. Currently running at something like 9 months and 2xRRP scalping (and that's just from legitimate etailers)
Posted by elguapo - Wed 07 Apr 2021 12:54
A bit of bonus for everyone waiting for a new card being able to get a bit more performance out the old one
Posted by Kato-2 - Wed 07 Apr 2021 15:53
You can get the similar results just by following blurbusters g-sync guide for all games but the reflex feature is handy for the less technically informed.

battlenonsence has a large number of technical videos covering this topic.
https://www.youtube.com/user/xFPxAUTh0r1ty/videos
Posted by rave_alan - Thu 08 Apr 2021 03:12
When everyone has it, there is no advantage. Good for sometime, but feels like almost cheating.
Posted by kalniel - Thu 08 Apr 2021 08:31

rave_alan
When everyone has it, there is no advantage. Good for sometime, but feels like almost cheating.

There's not much in the article about any kind of advantage, it's just better translating your intended actions into actual actions (fire now=fire a bit closer to now than before). Therefore any skill elements designed in the game (e.g. bullet travel time/whatever) are closer to what you experience as a player.

I guess that could end up giving you an advantage, but really this is going to improve the experience (in an undetectable way) for everyone - it applies even to pretty ancient cards, and AMD/MS have a similar thing coming too.