A reader and forum member of the German language tech site HardwareLuxx recently decided to upgrade his Nvidia GeForce RTX 3090 Founders Edition to liquid cooling. The PC DIYer, who goes by the name of iso0, had to take off the Nvidia reference design shroud and clean the old thermal paste off the GPU before reapplying fresh paste, to fit the water cooling block. However, what lay beneath the sticky silver grey paste was quite a surprise. 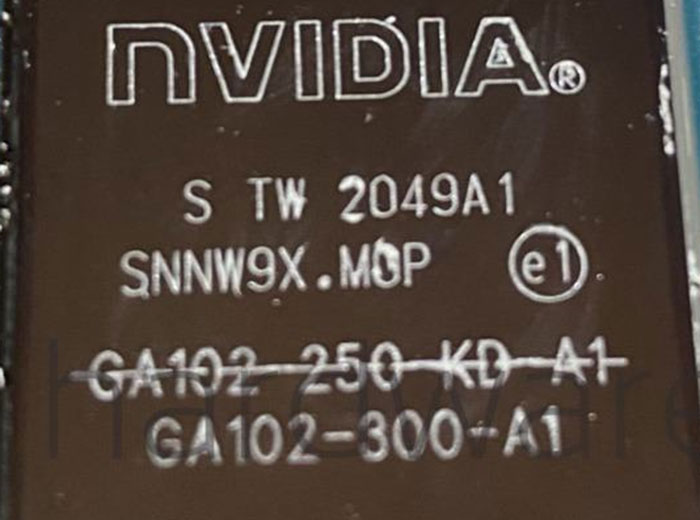 As you can see in the photo of iso0's GPU, above and below, this Nvidia GPU has had its ID changed. What once was designated as a GA102-250-KD-A1, has somehow been re-categorised as a GA102-300-A1… From leaks and rumours about the unannounced GeForce RTX 3080 Ti in previous months, it is thought that the GA102-250-KD-A1 was the GPU that was going to feature in that mythical beast. However, it is a step below the RTX 3090, and GPUs aren't usually repurposed as higher-end GPUs, it usually goes the other way – so what is happening? 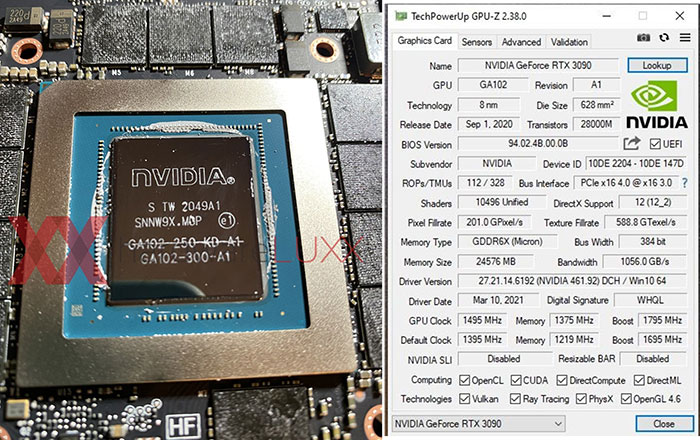 HardwareLuxx Editor Andreas Schilling thinks that the most likely scenario is something like this; the GA102-250-KD-A1 was an Engineering Sample (ES) chip which was made to test out various RTX 3080 Ti memory configurations. Meanwhile, Nvidia has been adjusting what the RTX 3080 Ti would deliver, in the face of rival market offerings, namely the high-end AMD RDNA 2 graphics cards. Having seen the generous memory quotas of the AMD efforts, and then worked out that they aren't available to buy, just like its own efforts, Nvidia seems to have gone through three iterations of the RTX 308 0Ti, as tabulated below.

Above you can see that the latest RTX 3080 Ti rumours point to Nvidia cutting the SMs to 80, which would open up the possibility of using silicon which didn't have a full quota of 82 SMs working perfectly. It seems to have again settled on 12GB being enough to compete without cannibalising its RTX 3090 sales.

Thus, the GeForce RTX 3080 Ti rumours may have shifted over recent weeks / months due to the hardware actually changing. Another thing that seems to change a lot about this GPU is the expected release date. The latest information points to an April / May launch window. Around the same time we expect to see an RTX 3070 Ti offered in both 8GB and 16GB configurations.

Posted by ohmaheid - Mon 29 Mar 2021 11:52
Maybe that 3090 yields were so bad that some put-upon production manager decided to pad out the numbers in whatever way they could, hoping that no-one would actually remove the heatsink.
Posted by QuorTek - Mon 29 Mar 2021 15:09
It is miners that is their main customers… they usually don't check anyway :o
Posted by jimcumming - Mon 29 Mar 2021 16:18
I expect Nvidia worked out that they could make more money by delaying the 3080ti launch and just selling this stock as 3090s. I guess the only differences between the hardware is software controlled and the amount of memory installed.
Posted by kompukare - Mon 29 Mar 2021 17:40

jimcumming
I expect Nvidia worked out that they could make more money by delaying the 3080ti launch and just selling this stock as 3090s. I guess the only differences between the hardware is software controlled and the amount of memory installed.

Fairly sure that they've fuses they can blow. Software controlled would have been defeated by now.
Posted by John_Amstrad - Wed 31 Mar 2021 12:20
If I were iso0, I would sued NVIDIA