Rumours coming out of China suggest we will see Nvidia launch the GeForce RTX 3080 Ti in April. The story was picked up by Twitter's momomo_us, and the source appears to be very confident that the new high-end Ampere graphics card will "be released on the market around mid-April".

Rumours about the release on an RTX 3080 Ti have swirled for rather a long time. It appears to be the case that Nvidia and partners have pencilled in a date to launch this GPU at least twice previously, before deciding to delay, and may have reconfigured the key specs (particularly VRAM quota). In December last year HEXUS published three stories on the yet to be revealed GPU, as Asus accidentally listed this card in its support pages and Gigabyte registered models with the EEC. Furthermore, usually reliable sources tipped that the card had been delayed to at least Feb 2021. Coming up to date, a week ago we reported on various sources indicating the GeForce RTX 3080 Ti would apply Nvidia's mining limiter strategy. (On a side note, some reports this week saying that the Nvidia cryptomining limiter had been bypassed proved to be wrong). 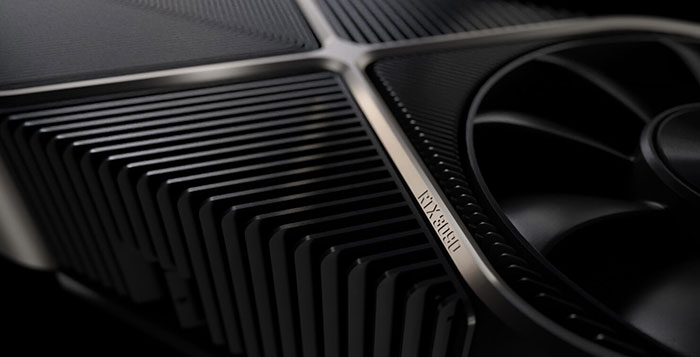 Looking at the previous rumours and leaks, the weight of opinion seems to be behind the upcoming RTX 3080 TI coming with 20GB of VRAM – just 4GB less than the RTX 3090. That is how Asus support listed it – in one of the clearer cut leaks from December. However, there is speculation now suggesting that this graphics card could be equipped with 12GB of VRAM, like the recently launched GTX 3060, which is still 2GB better than the RTX 3080.

The most recent HEXUS review of a GeForce RTX 3090 graphics card was of an MSI Gaming X Trio model – just in case you want a refresher of how the RTX 3090 compares to GPUs like the RTX 3080. However, more recent reviews, like our test of the Sapphire Radeon RX 6900 XT Toxic, put AMD's more recently launched RDNA 2 challengers in the mix.

Yup, and the mining nerf will show people moaning about miners that its not them that are causing the stock shortages..
Posted by CAT-THE-FIFTH - Fri 12 Mar 2021 11:15

'[GSV
Trig;4287198']Yup, and the mining nerf will show people moaning about miners that its not them that are causing the stock shortages..

You mean like the previous two mining booms,when in the 1st one there was shortages of AMD/ATI GPUs and price rises,and the last one a few years ago when there were shortages and price rises of GPUs? I still remember in 2017,people could sell a £200~£250 RX480 for nearly £400. I am not sure why you think miners have zero effect on dGPU supply for gamers,when it happened twice before.

Nvidia itself sold at least $175 million worth of dGPUs direct to miners:
https://wccftech.com/nvidia-allegedly-sold-175-million-worth-ampere-geforce-rtx-30-gpus-to-miners/

That was nearly 4 months ago,so even soon after the RTX3000 launch Nvidia(and its partners) was diverting supplies to miners.

Despite the RTX3060 being nerfed for some currencies,a lot of others run fine so miners are using them to mine them in anticipation of them rising in value.

The Nvidia shortages of dGPUs to retail is definitely being affected by mining. AMD,OTH it's because its using lots of its wafers for consoles,so is affecting both its CPU and dGPU supplies.

There might other stuff like Covid,etc also contributing to shortages,but when it comes to supply of Nvidia dGPUs to desktop miner are one of the main reasons for shortages,especially when Nvidia have directly supplied dGPUs to huge mining farms in Europe,etc. The miners are even trying to mine on laptops - the laptop RTX3060 GPUs are apparently not limited.

Then you have all the 12NM/14NM/16NM dGPUs using GDDR5 which are also in short supply.

But ironically its much easier to buy a dGPU in a prebuilt PC or laptop - so again means it desktop retail dGPUs which seem to be affected the most(same GPUs in laptops).
Posted by Syphadeus - Fri 12 Mar 2021 11:19

Yup, and the mining nerf will show people moaning about miners that its not them that are causing the stock shortages..

You can’t honestly believe that, surely?

Is it ONLY miners that are causing stock shortages? No. There are several factors. But miners not causing them at all? Off your rocker.
Posted by CAT-THE-FIFTH - Fri 12 Mar 2021 11:26

Is it ONLY miners that are causing stock shortages? No. There are several factors. But miners not causing them at all? Off your rocker.

Don't worry the mining defence force is out in strength. During the last 2 mining booms,it was never the miners fault. In the case of Nvidia,they apparently supplied nearly $200 million of RTX3000 dGPUs direct to miners 1~2 months after the launch of Ampere. There are apparently substrate constraints too which people point to,but mining is having an effect.

“For the quarter in review, Nvidia sold at least $175 million worth of new generation GPUs to ethereum miners, helping the outperformance,” Bitcoin.com reported based on a note from RBC Capital Markets analyst Mitch Steves. “The analyst had guided sales to miners to come in at $150 million for the quarter.”

BTW,see how the analyst says “new generation” so it might be implied,there was more sales in total if you include “old generation”.

AMD,OTH,is more affected by wafer supply - apparently its diverted most of its 7NM wafers to console production which affected both its CPU and GPU supplies. Nvidia is not using TSMC either,but Samsung so you can't blame the current TSMC issues for Nvidia having a lack of supply.

In fact even the Turing dGPUs have sold out,including those on TSMC 12NM and using GDDR5.

You want to see how big some of these mining farms are:
https://www.youtube.com/watch?v=f0HC1Udk6-E