A week ago HEXUS reported upon the Nvidia GeForce RTX 3060 will have a crypto mining performance nerf. This initiative from the green team was designed to make GeForce RTX 3060 graphics cards less attractive to Ethereum miners – as hash rates on the new Ampere gaming graphics cards would be limited by about 50 per cent via Nvidia's software/driver/firmware restrictions. Mining site NiceHash asserts that this RTX 3060 nerf makes the new 12GB card from Nvidia a 22MH/s performer (rather than reaching its full potential 45MH/s). This attainable level of ETH mining performance puts it a little behind the GTX 1660, and even the old GTX 1060 (6GB).

As well as implementing the performance nerf for the upcoming but now released Nvidia GeForce RTX 3060 12GB (check out the HEXUS review of the Gigabyte GeForce RTX 3060 Gaming OC 12GB if you haven't already), Nvidia's dual-pronged approach to limiting the appeal of consumer graphics cards with miners included the launch of the CMP HX series mining GPU cards.

Above you can see the CMP HX mining performance table, with a few other details, shared by Nvidia. Two of these new cards are supported by the new Nvidia Game Ready driver that was released yesterday to offer day one support for the RTX 3060, among other things, and VideoCardz has been poking around with the driver code to see if it reveals anything interesting.

From checking out the driver device ID support strings it has been determined that the first two Nvidia CMP HX GPUs to become available, the 30HX and 40HX, are based upon previous gen Turing GPUs. Specifically, it is reasonable to narrow down and determine that the Nvidia CMP 30HX will include a custom TU116 GPU, while the CMP 40HX will feature a custom TU106. For your reference, the TU116 was the GPU behind the GTX 1660 Super, and the TU106 behind the RTX 2070. 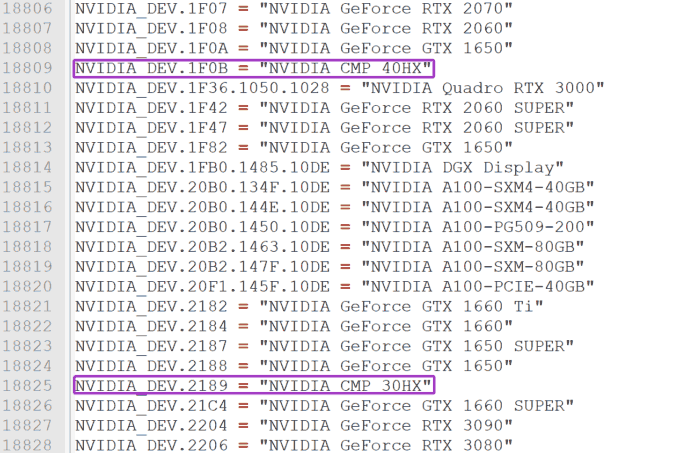 The good thing about these CMP HX parts being Turing-based is that these GPUs are made by TSMC at 12nm, while the Ampere consumer parts are made by Samsung on its 8nm process. Production of one shouldn't really detract from the other therefore unless you start considering the wider shortages of silicon wafers or DRAM. Various sources also think that CMP HX dies are defective leftovers that simply couldn't be purposed into consumer gaming graphics cards.

The Nvidia CMP 50HX and 90HX won't be available until Q2 this year, but one might already be able to make educated guesses what GeForce GPUs these are based upon from their MH/s performance/power usage. Any uncertainty about this should be ironed out nearer release when their support drivers arrive.

lumireleon
WHY not make ASIC for them?

I'm well away from mining but I'm sure I seen elsewhere there aren't any ASICs for Ethereum, which most people mine on GPUs?
Posted by DanceswithUnix - Fri 26 Feb 2021 11:59

Terbinator
I'm well away from mining but I'm sure I seen elsewhere there aren't any ASICs for Ethereum, which most people mine on GPUs?

Oh there are ASICs for etherium, but you have to have over 4GB of ram and are limited on memory performance making an ASIC not so faster than a GPU that GPUs become obsolete
Posted by Zhaoman - Fri 26 Feb 2021 12:10
So 50HX = 2080 Super
and 90HX = 3080?
Posted by Ampersand79 - Sun 28 Feb 2021 14:53
This will be a very interesting launch, if they want these cards to succeed, best to get some samples to prominent youtube miners to do tear-downs and optimisations on, and if they do indeed perform well compared to Ampere gamer cards, this could help out the gaming community, esp as Crypto has had a shellacking in the last 2 weeks with 30+% drops on some coins.