Being thoroughly prepared for an upcoming hardware launch is an admirable quality for a tech company. However, sometimes eager preparedness can spill over into pre-launch leakage, as we have seen many times before. The latest example is Asus and its ROG Strix RTX 3080 Ti 20G and ROG Strix RTX 3060 12G Gaming graphics cards. These cards have been added to the firm's graphics card support and services pages, spotted HXL, and of course they haven't been officially launched yet. The source spotted the support listings on Christmas Day and they have since been removed. 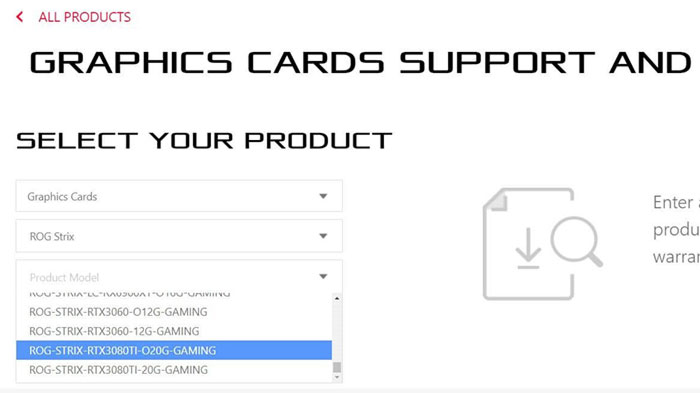 Above you can see the screenshot taken by HXL and VideoCardz took a snap of it for posterity too. If you are familiar with Asus model names you can see that it has two RTX 3080 Ti models with 12GB waiting in the wings. The O20G model will be a bit faster with a factory overclock and cost more for it. Unfortunately, we don't have any way of knowing the OC version's speed boost, or indeed any other tech specs beyond the 20GB VRAM from this Asus leak. However we have some rumoured specs from back in the days before Asus confirmed that this GPU would be a thing.

Nvidia's GeForce RTX: Game On special event is scheduled for 9am PST (5pm UK) on the 12th January. Some if not all the above new graphics cards should be unveiled at this CES 2021 presentation.

lumireleon
Strange that Nvidia does not have spies working at AMD or they are way below in the food chain. These products are a knee-jerk reflex after the 6800 line of GPUs from AMD.

Yes, I thought this a little strange too. Maybe they got a little complacent with their intel gathering? Though the other, more cynical approach is they knew exactly what AMD was doing, but realised they'd make more profit this quarter (coming quarter now I suppose) releasing cards in this order. ‘Here’s the amazing 3080! it's top dog and you can just about afford it! Oh good, you've bought one? Well here's the 3080 Ti! Giz yer money!".

Oh, and it keeps Nvidia in the headlines. AMD really need to release some press material about the 6700 and 6700 XT to grab a bit of attention.