We saw Sapphire officially reveal its first batch of AMD Radeon RX 6800 (XT) graphics cards at the end of last week. While it was interesting to see the close AMD partner's first efforts, it was a bit deflating to find out they were all reference designs. The news was a contrast with the Asus release a day earlier, which even included a liquid cooled Strix model.

One might wonder what was holding Sapphire back from revealing any custom designs but it does indeed have some up its sleeves, as it revealed a shot of a new Nitro+ graphics card yesterday afternoon. The brief Twitter post which was just a winking smiley face and a collection of relevant hashtags was, thankfully, embellished by an artistically angled shot of a Sapphire Radeon RX 6800 XT Nitro+ looking like a spacecraft approaching a stylised Sinistar vortex. 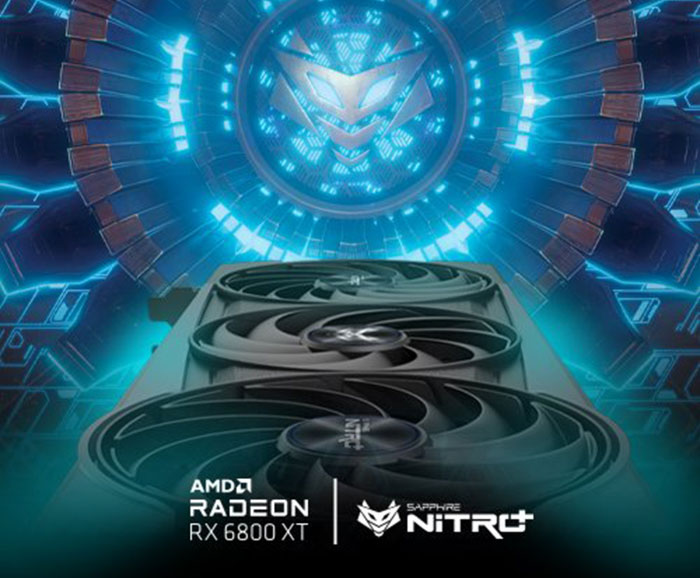 At first glance you might be looking at those fans and thinking "is it nearer, or is it bigger?" in Father Dougal fashion. Assuming the shroud of the graphics card is a uniform rectangular shape it even might be the case that all three fans are different sizes. TechPowerUp observes that the fans are "partially webbed impellers," and it reckons that this triple fan card is a bit fatter than two slots wide.

AMD has only just released the first batch of its impressive Zen 3 architecture CPUs but it will be back in the headlines for GPUs soon enough. The first Radeon RX 6800 and 6800 XT GPUs will be released on Wednesday 18th November, less than a fortnight away.