Nvidia and its partners are preparing release the fortnight delayed GeForce RTX 3070 graphics cards on Thursday. You might be interested to know that Palit has shared teaser video showing off its Stormborn JetStream RTX 3070 already. Some reckon that Nvidia shifted the release of the RTX 3070 to steal some thunder from AMD's RDNA 2 special event, which streams live tomorrow. Meanwhile a significant amount of detail concerning a completely new GeForce RTX 30 series graphics card has suddenly emerged, and it isn't the RTX 3060 some were expecting next on the menu, but an RTX 3060 Ti.

The first pretty sizable chunk of evidence that an Nvidia GeForce RTX 3060 Ti is on the way shortly came thanks to Chinese retailers listing such graphics cards on the Taobao, one of the Alibaba commerce sites. Avery on Twitter noticed these listings and captured some screenshots to share yesterday afternoon. You can see that the purported RTX 3060 Ti comes with a Y2,999 price tag, which is roughly equivalent to £340. 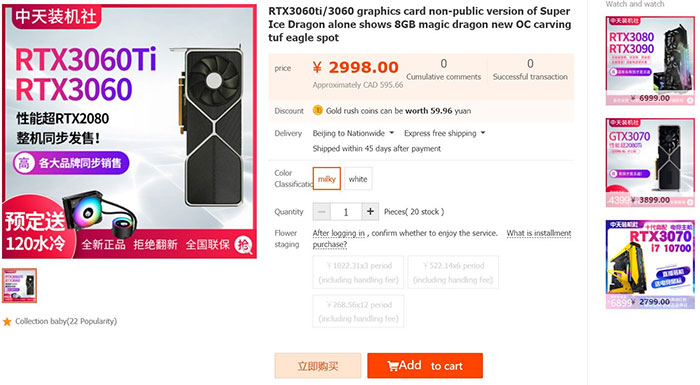 The above listing basically says that the GeForce RTX 3060 Ti performs on a par with the RTX 2080. These Chinese retailers are expecting a 30th November release date.

Moving along to our second piece of evidence for the GeForce RTX 3060 Ti, a sample of this very card has just passed GPU-Z verification and can be found in TPU's database. Matthew Smith, the TPU database editor brought attention to the entry yesterday evening and VideoCardz brought it to my attention. 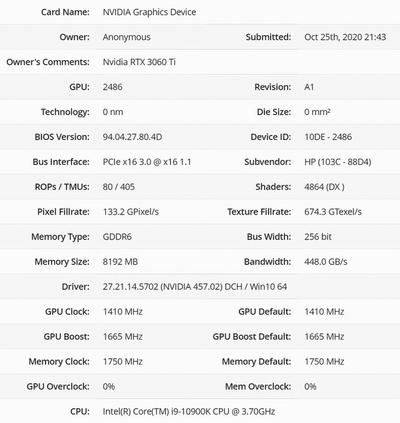 Please remember to take this RTX 3060 Ti news with a pinch of salt for now.

HEXUS
Please remember to take this RTX 3060 Ti news with a pinch of salt for now..

chusblinda
I get paid more than $120 to $130 per hour for working online. I heard about this job 3 months ago and after joining this i have earned easily $15k from this without having online working skills. This is what I do..Paydaykit.com