Imagination Technologies has followed up its 10th gen IMG PowerVR A-Series GPUs with the new 7nm IMG B-Series GPUs which are claimed to deliver up to 30 per cent greater efficiency. The 2020 version of "the GPU of everything," naturally still caters for a wide range of use cases with 33 SKUs in the BXE, BXM, BXT, and the new BXS families - addressing markets such as mobile (premium to entry-level), consumer, IoT, microcontrollers, DTV and automotive. The range offers up to 6TFLOPs of performance in 25 per cent smaller packages, with up to 2.5x higher fill rate than competing IP cores. 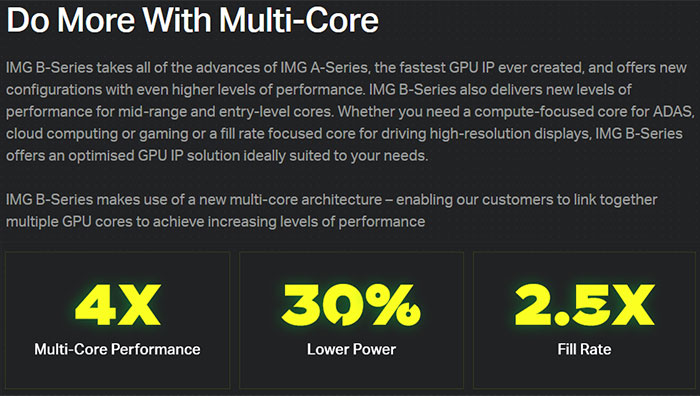 While the IMG A-Series GPUs made a significant leap over previous generations, the B-Series evolves to deliver what is claimed to be the highest performance per mm for any GPU IP available. This is largely down to IMG's application of multi-core technology.

IMG asserts that a significant factor behind the gains in this generation comes from the B-Series' new multi-core architecture. Yes, the top-end A-Series 5XT GPUs were multicore, but the new processors are set up in a fundamentally different way, featuring what IMG calls a 'decentralised multi-core' design. This means cores can run either independently or combined to collaborate on the same task. Thus you will find that the IMG B-Series GPUs come in configurations of between 1 and four cores for double, triple or quadruple performance, without needing to radically redesign layouts. This makes it easy for customers to scale designs. 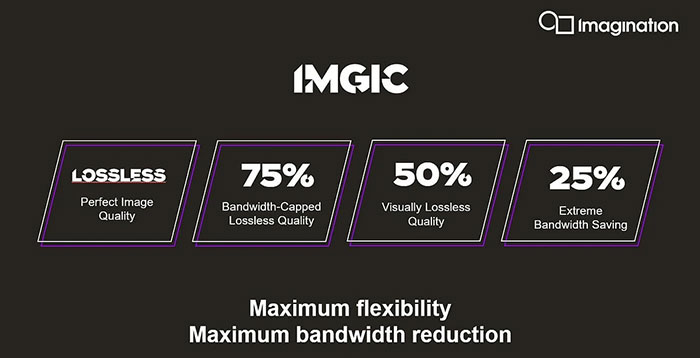 Advances delivered by the IMG B-Series GPUs aren't all to do with the core GPU, IMG has boosted the appeal of these GPUs with other features. A new image compression technology, IMGIC features throughout the range, which builds on IMG PVRIC4 with four modes of compression for flexibility between IQ and bandwidth.

The IMG B-Series is available today with high-end solutions using the cores, and wielding ray tracing, expected to launch in the second half of 2021.

Posted by darcotech - Tue 13 Oct 2020 14:38
How come there is no graphic card made with this GPU?
6 Tflops are not that bad
Posted by llololloy - Tue 13 Oct 2020 15:38
I remember having a power vr graphics card back when they competed with 3dfx and their voodoo cards.
It was as add in card, extra to your graphics card.
Thought they'd gone, but I guess not.
Posted by nobodyspecial - Tue 13 Oct 2020 17:19
KYRO/2…IIRC I think I used to sell two of those models. Fast in stuff like serious sam, didn't have hardware TL on the first or something I think, but they were both great cards and ROCK solid for days while I'd burn in a customers machine running serious sam! :) Those were the days. ;) Wait those were STmicro, can't remember who bought their gpu ip. Maybe my mem is failing, but I think that was power VR stuff so imagination old IP I think…
Posted by krazy_olie - Tue 13 Oct 2020 17:27

darcotech
How come there is no graphic card made with this GPU?
6 Tflops are not that bad

The whole architecture is designed to be low power and embedded.
Posted by philehidiot - Wed 14 Oct 2020 05:27

llololloy
I remember having a power vr graphics card back when they competed with 3dfx and their voodoo cards.
It was as add in card, extra to your graphics card.
Thought they'd gone, but I guess not.

Was just thinking the same. I think we played Wipeout using one.