PC gamers and enthusiasts might be on tenterhooks for the Nvidia CEO's special announcement on Tuesday but in the meantime the green team has released an important GPU update for thin and light laptop designs. Yes, there is a new GeForce MX GPU available to systems makers, which is designed to bridge the gap between integrated and more powerful discrete graphics in portables, without impacting your battery too heavily.

Nvidia emailed HEXUS about the new GeForce MX450, and I have perused the official MX450 GPU webpage that has subsequently been published - but for some reason the most interesting tech specs for this GPU remain under wraps. The headline changes to this design are that it introduces support for PCIe 4.0 and GDDR6 graphics memory to the segment. However, the specs page is rather sparsely populated. My email says that the new MX450 delivers "even faster performance than our previous MX350 for faster photo editing, video editing, and gaming," but we don't even get any in-house performance comparisons, not even a mention of the 'GeForce Performance Score' (which for the MX350 was 2.5X).

We are told that the GeForce MX450 will debut in October in products from Nvidia's leading laptop OEM partners. So at least then people will be able to get a good look at this GPU and use system analytics tools to peep at its configuration, as well as run it through various benchmarks. 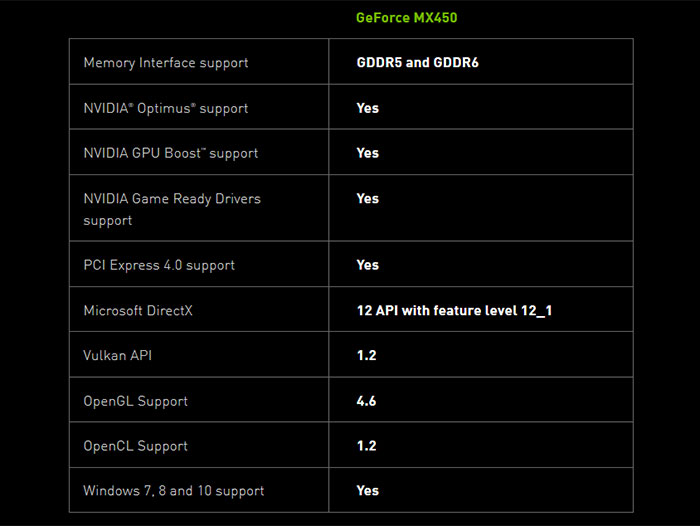 Despite the lack of detailed information from Nvidia we can get a pretty good indication about how the MX450 has been created by Nvidia thanks to information about pre-release systems from sources such as NotebookCheck. According to this site the MX450 is based upon the Turing TU117 chip, better known as the GPU in the GeForce GTX 1650 graphics cards. Nvidia will likely to have scaled back base/boost clocks and perhaps other features such as the memory bus or shader count to reduce power consumption.

The reason for a GeForce MX graphics update now may well be that the performance of integrated graphics is about to get a big leg up, with new Intel laptop processors using Xe iGPUs due to arrive in a similar timescale.