Already we have referenced the MSI GeForce RTX 2080 Ti Gaming X Trio when talking about the 'Z' model. That is because other than the memory spec uplift there is no other known difference between the cards (but of course the price will be different too). They are such similar beasts that MSI embeds the X Trio promo video in the Z Trio's product pages. 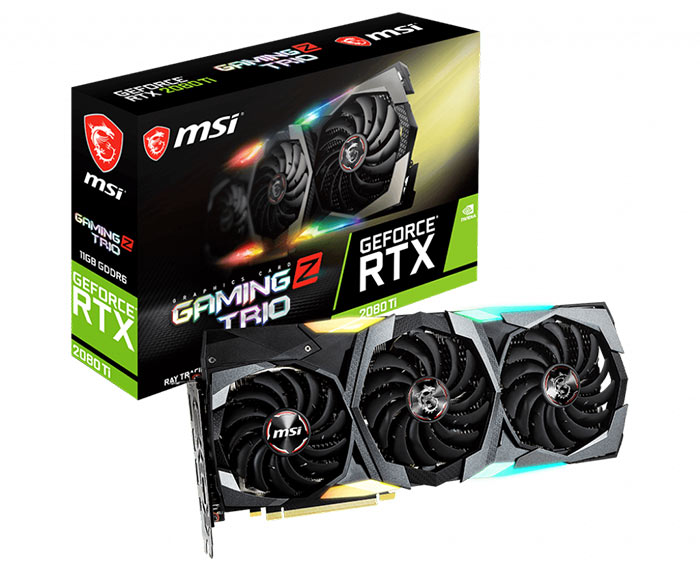 In brief these Gaming X/Z Trio designs from MSI leverage a trio of fans as part of the Tri-Frozr Thermal Design. This leverages a series of MSI cooling features such as Torx Fan 3.0 fans with double ball bearings, a Zero Frozr heatsink, aerodynamic design with concentrated heatpipes and a soupcon of Thermal Compound X.

In addition to the premium MSI flavoured cooling structure there is a brushed metal vented backplate with appropriate use of thermal pads and MSI Mystic Light powered RGB LEDs over several card zones.

Above you can see that the GDDR6 memory speed of the MSI GeForce RTX 2080 Ti Gaming Z Trio is 16Gbps out of the box. This compares against the 14Gbps of the MSI GeForce RTX 2080 Ti Gaming X Trio model (and other rival models previously released). I've set up a direct comparison on the MSI website for both the cards in case you want to look closer. However, the other key metric of the GPU core count and core boost clocks are the same. Other tiny differences (like a few mm/grams difference) might be down to product revisions and refinements since the time the X Trio was released.

6 Intel employee Tweets "DG2 is right around the corner"

GeForce RTX 3060 debuts at number 84 in Steam HW Survey QOTW: Do you overclock? QOTW: Do you use any PCIe slot other than primary x16? HEXUS Week In Review: Arctic, G.Skill and Noctua coolers MSI MEG Z590 Ace Gold Edition

pa1nkiller
So just over 8% more money for 5% gains and an extra £100 for the customer to lose when the 30 series launches?

Performance Vs price is never a linear relationship at the high end. That's what the mid range is competing on. This is competing on being the absolute best currently available and the only competition is itself.

QuorTek
No ty, if they halved the cost before new series maybe…

Aye the fact that this still tops a grand whilst we're awaiting a new series of cards is kind of annoying. But…. they will charge what the market will bear and it's apparent that people will buy these cards at this price. Or they wouldn't be producing them.
Posted by edmundhonda - Fri 17 Apr 2020 16:08
Preorder up on CCL has it at £1300 with the Gaming X at £1220.

They're both ridiculous but it's not anywhere near the most expensive 2080ti and it's probably quickest.
Posted by rave_alan - Fri 17 Apr 2020 17:39
Guess the cost to produce this thing is around 100. But if the market buys it, why not to sell.