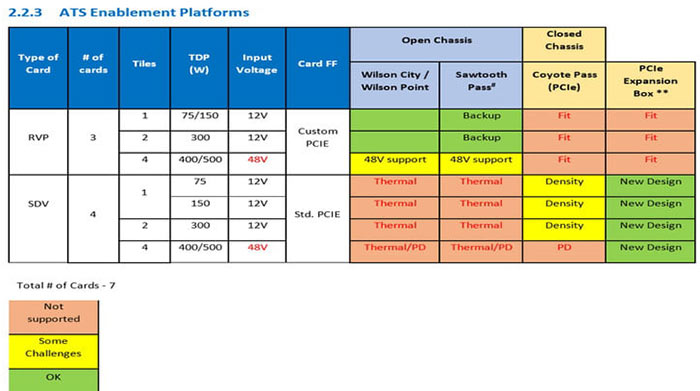 The above slide charts seven Xe cards that are thought to be for workstations. RVP is short for 'reference validation platform', and SDV is short for 'software development vehicle'. If you remember back to CES 2020, Intel used this occasion to show off the DG1-SDV. RVP products are closer to what will be shipped to customers. Other table columns mention; the TDPs, input voltage, chassis support, and number of 'tiles' the card is based upon.

Tiles are expected to correspond to what are better known as chiplets, but Intel is shrugging off AMD's architectural terminology. Xe graphics cards charted in the leaked slide posses 1, 2 or 4 tiles. For connecting the tiles, Intel is rumoured to be using its high-bandwidth EMIB packaging technology.

Starting with the single tile card, this is expected to sport 128 execution units (EUs). It can run at 75W, taking power from the PCIe slot, or up to 150W from a regular 12V PSU. The two tile card has 256 EUs and eats up to 300W. Lastly, the four tile card offers 512 EUs and needs a 48V power supply to feed it 400/500W. These EU counts tally with test graphics drivers released by Intel last summer. 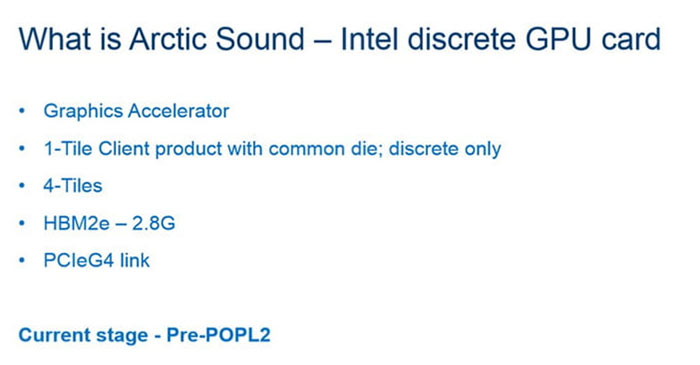 Another interesting document revealed by the source mentions two key features of the upcoming range. First of all these upcoming Xe graphics cards will use HBM2e memory, and secondly they will make use of the PCIe 4.0 interface standard. Previously both Samsung and SK hynix have mentioned that HBM2e will start to ship in products in 2020.

Intel is scheduled a 'Xe Architecture primer' presents at the upcoming GDC in San Francisco 16th - 20th March. This should clear up a lot of uncertainties and speculation as it is promised we will be given "a detailed tour of the hardware architecture behind Intel's upcoming GPUs - unveiling the structure behind its building blocks and their performance implications." 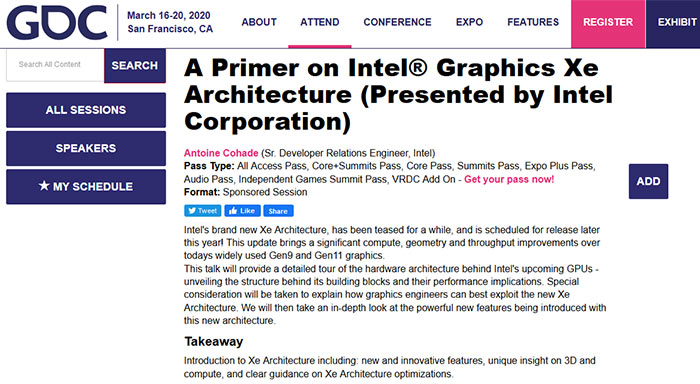 Could be Intel are targetting the high-end AI / DataCentre marketplace with the 500W / 48V parts, rather than going after consumers?
Posted by Ballantin - Tue 11 Feb 2020 11:45

48V is standard in the server side. It is for example the voltage used in PoE devices, so a lot of servers and other devices have PSUs that support 48V
Posted by DanceswithUnix - Tue 11 Feb 2020 11:47

12V is the other rack DC standard, so possibly none of this is for consumers.