After heavily promoting the upcoming Integer Scaling Support for its integrated graphics, Intel has finally released a driver to enable support for what has been rebranded 'Retro Scaling'. Intel had flagged the support for Integer Scaling at driver level as arriving in August and it only just made it with beta support arriving in driver version: 25.20.100.7155 on the 30th (Friday). 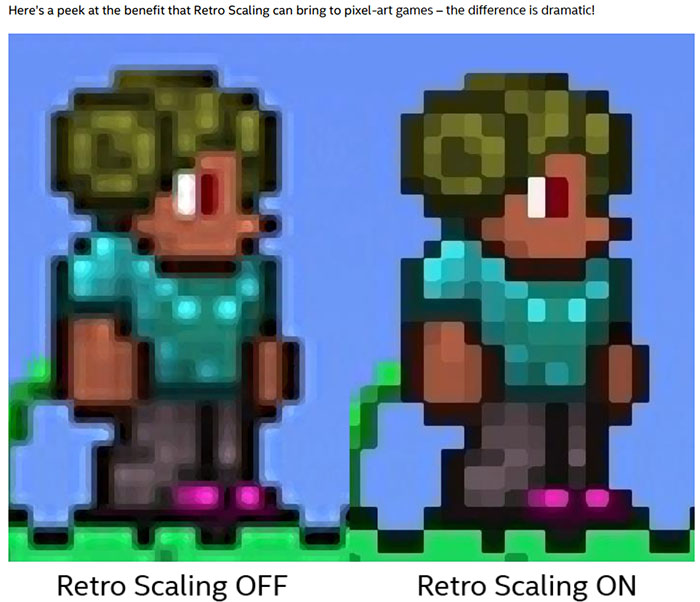 In brief, Integer Scaling Support or 'Retro Scaling' is a technique to upscale on-screen imagery by a whole number multiplier. It provides a characteristic look of crisp, sharp pixel edges in modern / retro titles, rather than trying to smartly guess (interpolate) and fill in pixel data with in-between colour values. As well as previous HEXUS articles on the tech, Intel published a game dev blog about integer scaling back in July.

Intel's message with the implementation of 'Retro Scaling' is that it is listening to the community, and created 'Retro Scaling' so users could experience pixel art based games at their best. It works for the latest indie releases and retro classics on modern hardware and screens, it reminds us.

Unfortunately your Intel GPU will have to be very modern. 'Retro Scaling' is only enabled with Intel's Gen11 iGPUs, as found in the company's 10nm 'Ice Lake' processors. Not many people will be running a PC with one of these at the time of writing. Currently Ice Lake PCs are limited to laptops and convertibles that are low voltage, slim and light designs.

If you do have an Ice Lake PC, you can download the new driver here, and it will enable beta support for 'Retro Scaling'. Then, in the Intel Graphics Command Centre, there will be three options to toggle:

Nvidia beat Intel to the punch with this same feature back at Gamescom. Its Gamescom Game Ready Driver introduced GPU Integer Scaling for owners of Turing GPUs, as well as some other nice features like a new Sharpen Freestyle filter, and a new Ultra Low Latency mode.

Tabbykatze
Sorry Intel, Nvidia beat you to it!

The feature? Or the (probably artificial) limitation of said feature?
Posted by Tabbykatze - Tue 03 Sep 2019 13:47

azrael-
The feature? Or the (probably artificial) limitation of said feature?