Nvidia released a new special edition of its GeForce driver yesterday, the Gamescom Game Ready Driver. Headline qualities for this driver were the improvement in gaming performance of up to 23 per cent, the introduction of integer scaling, and some new image sharpening features. However, it unfortunately introduced a bug where the installation of the GeForce Experience accessory software was mandatory. Now it has been fixed.

Starting with the good stuff, Nvidia's latest driver for GeForce owners can deliver a significant speed boost in some top games. In particular optimisations, are evident in Apex Legends, Battlefield V, Forza Horizon 4, Strange Brigade and World War Z. Check out the graph below showing the fps uplifts in performance using the latest RTX Super range of graphics cards. 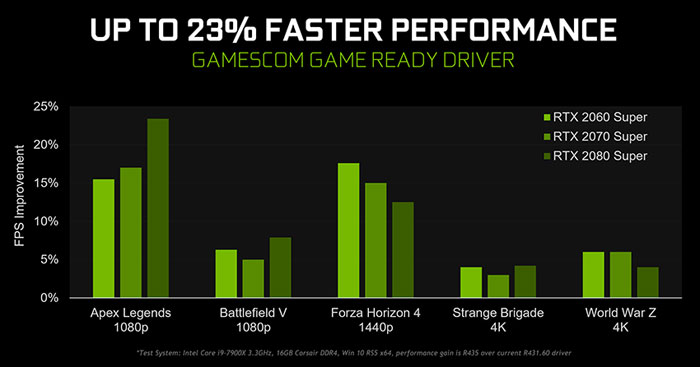 Another performance focussed introduction was that of Ultra-Low Latency Options for faster input response. This new mode enables ‘just in time’ frame scheduling, submitting frames to be rendered just before the GPU needs them. This further reduces latency by up to 33 per cent, says Nvidia.

To make the most of the new Ultra Low Latency mode you will be playing a game that is GPU bound with framerates between 60 and 100fps. You can find this mode in the Nvidia control panel > manage 3D settings > scroll down to mode selection. Then you can choose between the following and set them globally or per game:

Ultra-Low Latency modes are in beta test with support for all GPUs in DX9 and DX11 games. 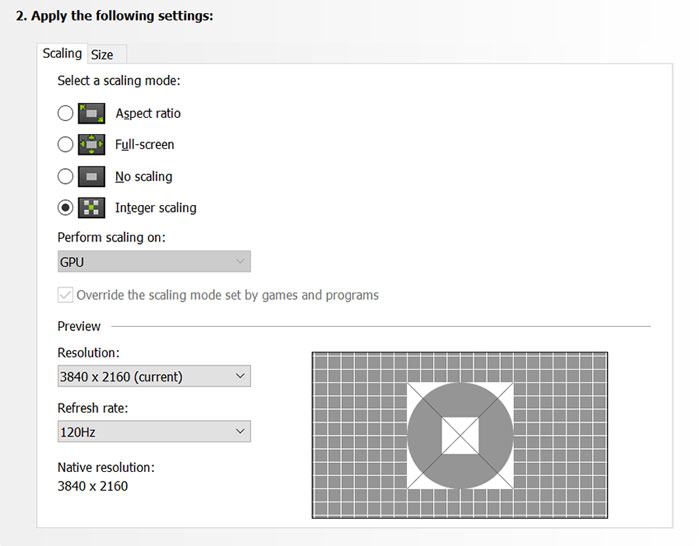 GPU Integer Scaling has been a hot topic with Intel graphics driver developers in recent months. Now this feature has been implemented for Turing GPUs. If you want sharp edged pixel delight in games like FTL and Hotline Miami you can turn Integer Scaling beta on in the Nvidia Control Panel, in the 'Adjust Desktop Size and Position' display menu.

A new Sharpen Freestyle filter with improved image quality and performance compared to Nvidia's existing 'Detail' Freestyle filter has been included in the latest driver. While the image quality has been improved, Nvidia says the performance impact is "roughly half that of the prior filter". Over 600 DX9, DX11, DX12 and Vulkan API games support this sharpening tech, and more will be added in subsequent driver updates.

Other goodies in the Gamescom edition driver include; support for three more G-Sync compatible displays, support for 30-bit colour, and optimal settings added for even more games.

As mentioned in the intro, yesterday's driver release had quite a big problem with it. As TechPowerUp reports, it "installed GeForce Experience regardless of obtaining GDPR-mandated user-consent, and made deselecting the application in the 'Custom Install' components list impossible." This behaviour has now been fixed with re-uploaded drivers direct from Nvidia.