Earlier this week HEXUS reported upon a smattering of details and images of custom AMD Radeon RX 5700 graphics card designs from Asus. The firm had emailed us about new cards coming to join its RoG Strix, TUF Gaming X3, and Dual EVO ranges. As interesting as the details and images were, we were left tantalised with regard to the out of the box GPU clock speeds that these cards would come with. This info was still 'TBD' we were told. 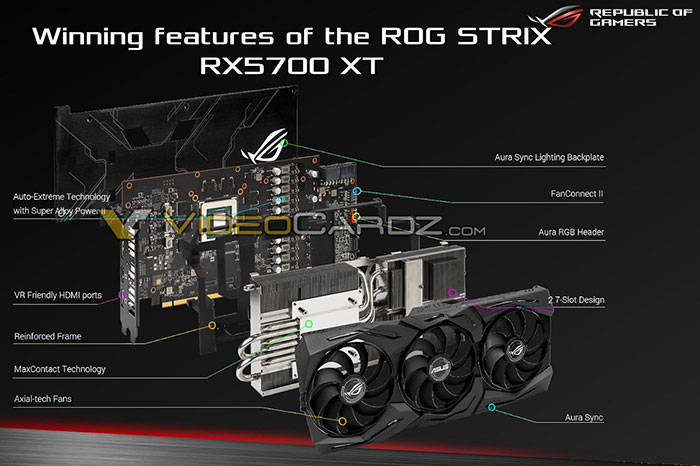 Today VideoCardz shared a genuine looking Asus RoG Strix Radeon RX 5700 XT review kit on its pages, which provides these headlining clock speeds and more. The review kit is quite a weighty document, but still presented in an advertorial manner, and in this case includes a breakdown of all the attractive features of the product, a specs list which includes GPU and memory clock speeds, and even some comparison charts with regard to performance, temperatures, and noise levels.

It is clear to see that Asus has created its own custom PCB for this card and the larger board includes a 14-phase VRM (11-phase vGPU, 3-phase vMem). The card is built using Asus Auto Extreme tech, using Super Alloy Power II, and as you would expect, there are the usual Asus RoG Strix accoutrements too. Its axial tech triple fan cooler with 2.7 slot design offers max-contact tech, a reinforced frame, and 0dB technology. It also features a dual BIOS (performance or quiet modes) and connects to Aura Sync for RGB fun, GPU Tweak II for erm… tweaking, and Asus FanConnect II for up to two hybrid-controlled system fans. 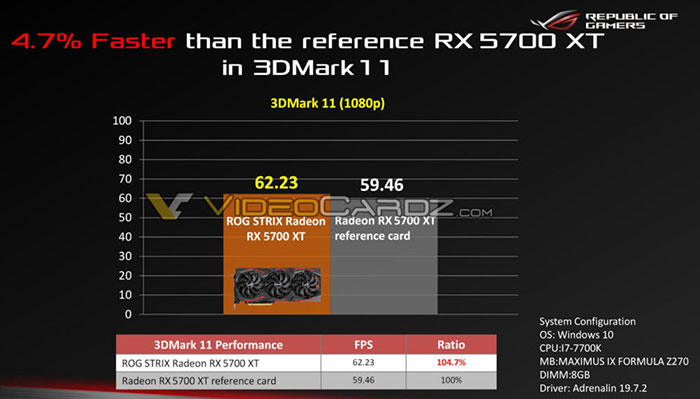 Above you can see the Asus RoG Strix Radeon RX 5700 XT's purported 4.7 per cent performance advantage over the reference model. The result from 3DMark 11 rather than an averaged multiple-game performance result isn't very inspiring. Much better are the cool and quiet comparisons, as you can check below.

Expect to see the Asus RoG Strix Radeon RX 5700 XT available from Friday 16th August. Pricing premiums over reference models will be interesting. We have already seen an indication that a Sapphire Radeon RX 5700 XT Pulse will retail at £429, the Asus Strix cooled version is likely to be a significant chunk of cash more again.

I suspect Asus are hoping that phrase will cause sex wee to leak.