A blizzard of snippets of information regarding a purported Nvidia GeForce RTX Super series of graphics cards has swept across the internet in recent hours. Thankfully, VideoCardz has distilled all the latest info, backed up by Igor Wallossek from Tom's Hardware Germany, into a cogent piece that is worth a sip - though of course a pinch of salt is still required.

VideoCardz says that it has confirmed three new GeForce RTX Super series graphics cards that were outlined by the Igor's Lab TV YouTube channel earlier this week. In brief its sources confirm the names, extra CUDA cores, and memory buffs that are destined for the series. This is summed up in the screenshot directly below.

Staring at the entry-level for RTX graphics cards, it is reported that the GeForce RTX 2060 Super "will basically be a cut-down version of RTX 2070 non-Super, featuring TU106-410 GPU with full 256-bit memory bus". It is good to see this SKU get 8GB of GDDR6.

Moving upwards we see that there will be a faster Nvidia GeForce RTX 2070 variant, augmented by a further 256 CUDA cores thanks to its TU104-410 GPU. 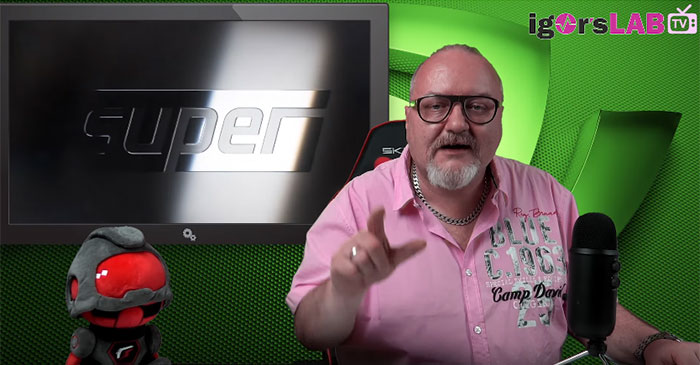 On the topic of pricing, the new Super variants are supposed to launch at the MSRP of their predecessors, with the non-Super variants getting a price cut. Timing-wise, the rumour mill expects Nvidia to announce these new GeForce RTX Super graphics cards next Thursday, with availability scheduled for mid July.

It will be interesting to see, if the above pans out, how it will change the competitive landscape with AMD. Remember that AMD is introducing its Radeon RX 5700 and RX 5700 XT cards, which compete with the existing RTX 2060 and RTX 2070 respectively, on 7th July.

Posted by darcotech - Fri 14 Jun 2019 10:20
If they actually sell new ones with MSRP prices of old ones, and old ones are getting price cut, then it is all beneficial for customers.

As usually, this happens when AMD arrives on market with something new, the competition slash the prices and everyone is running to buy competition products for lower prices.
And that is thanks to AMD. But they are not rewarded for their effort.

So for me, there is this moral dilemma. At least on GPU side, should I go for green or red team?

On CPU side, if what AMD presented is true, Intel needs to up their game and some. So I will go AMD. That is easy choice.

darcotech
So for me, there is this moral dilemma. At least on GPU side, should I go for green or red team?

Supposedly Nvidia have 90% profit margins on some of their GPUs. if you are OK with that, keep giving them money.

The new 2070 is using the same TU-104 die as 2080, before it used the 2060 die. So this is what I would have expected them to release in the first place, making me once again think they have a poor attitude to their customers.

But all academic to me as a Linux user given Nvidia's poor open source support.
Posted by blokeinkent - Fri 14 Jun 2019 11:06

darcotech
If they actually sell new ones with MSRP prices of old ones, and old ones are getting price cut, then it is all beneficial for customers.

Except for recently existing ones that have just shelled out. Really don't think customer loyalty is a term that exists among the Nvidia board.

If availability is mid July its been on the cards (n.p.i.) for some time
Posted by aidanjt - Fri 14 Jun 2019 12:07
Can these people seriously not read the market? Consumers want super affordable, this is not going to be affordable. $150-300 has always been the vast majority, and neither company has provided any real performance improvement to that bracket in over 4 years.