Deep Learning Super Sampling (DLSS) has been added to Anthem in a game patch released yesterday. The co-op action game from EA / Bioware will run at up to 40 per cent faster frame rates with DLSS applied, according to a new post on the GeForce Blog. Furthermore, Nvidia's deep learning neural network supercomputers are continuing to train and optimise the DLSS in Anthem, so further optimisations are promised.

To make use of DLSS, gamers will need to own an Nvidia Turing GPU packing graphics card, more specifically one of the new cards in the RTX20 series. Another proviso, at this time, is that you have installed the latest Nvidia Game Ready Driver, you are running Windows 10 v1809 or higher, and the following screen resolutions should be used:

Nvidia highlights that "DLSS helps the most when the GPU is under maximum load". See the stats below for a 4K Anthem gaming session example using various GPUs. 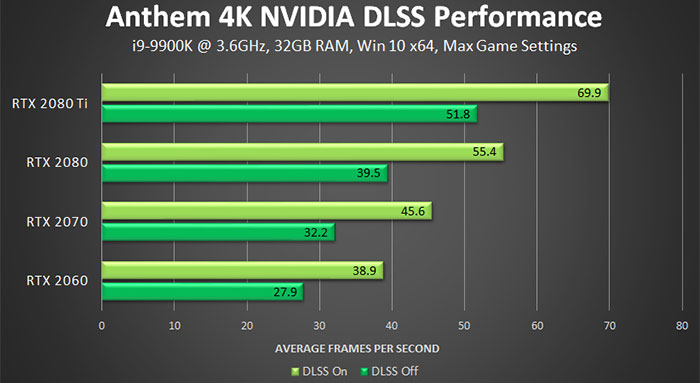 If you've never used Nvidia Highlights before, it is a system that automatically captures highlight clips from your gameplay. Later you can edit and compile the clips to preserve your best moments for posterity. There is a generic but rather old tutorial about the feature here. In Anthem, Nvidia and Bioware have implemented Highlights so that it auto saves gameplay clips and screenshots encompassing the following events: 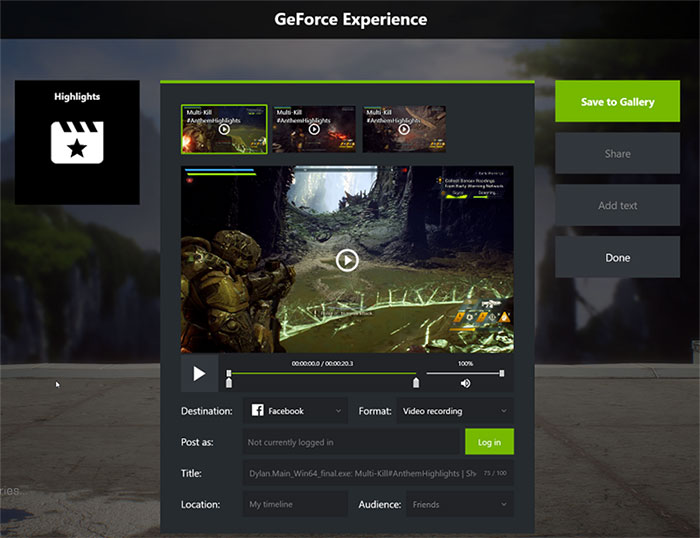 Soon there won't be games or graphical engineers, just deep learning neural networks that magic a game up for us…
Posted by Kato-2 - Wed 27 Mar 2019 11:12
I gave it a whirl at 1440p with a 2060 and it really does help quite a bit, was hitting steady 60+ frame rates were before it was only sometimes that.

Tabbykatze
Had a funny thought.

Soon there won't be games or graphical engineers, just deep learning neural networks that magic a game up for us…

Kato-2
Anthem is still a boring grind though.

It's a complete mess currently, each patch seems to make it worse in terms of loot. For a “looter shooter” it seems BioWare simply don't have what it takes.
Posted by Hoonigan - Wed 27 Mar 2019 11:43
So far my impressions of DLSS has gone through the following stages: