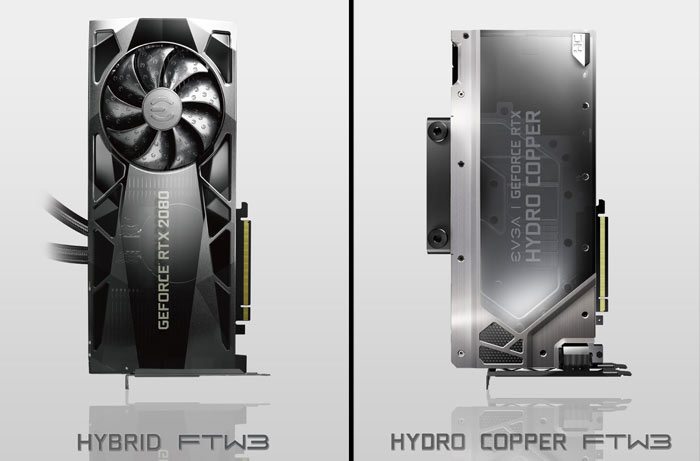 Shortly after the Nvidia RTX 20 series launch event we saw a host of partner cards launched, including a pile from EVGA, none of which were hybrid/liquid cooled examples. As noted in our roundup on 21st August, EVGA launched a comprehensive 16-strong lineup of GeForce RTX 2080 and RTX 2080 Ti gaming graphics cards but now we have the official word that there will be at several more on the way (RTX 2080 and RTX 2080 Ti versions of the Hybrid FTW3, Hydro Copper FTW3, Hybrid XC, and Hydro Copper XC). 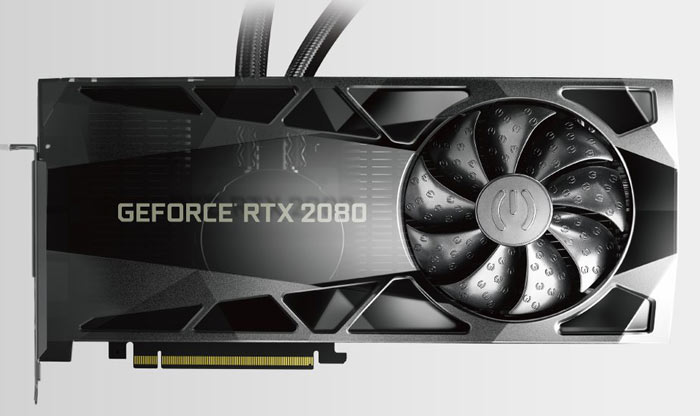 As you can likely tell from the pictures the Hybrid cards are AiO designs with a single fan on the card and pre-filled liquid loop going off to a radiator. This is EVGA’s own AiO design which is based upon Asetek gen6 hybrid technology. 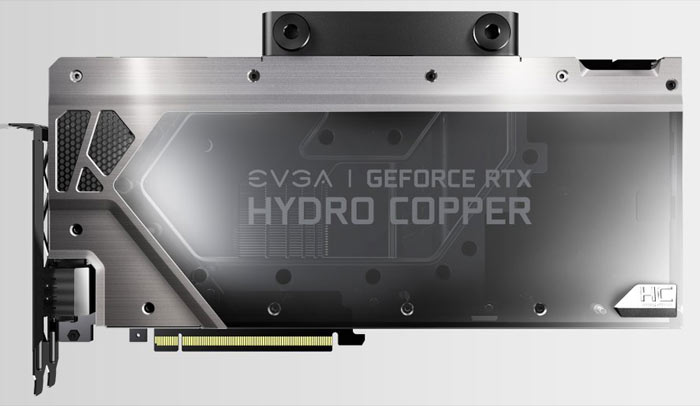 Last but not least there is a single fan blower EVGA RTX 20 model designed to fill an obvious gap in the lineup. Some people prefer this back exhaust design if their PC chassis is particularly compact or has little other ventilation/airflow possibilities.

Posted by Friesiansam - Wed 05 Sep 2018 11:49
If other consumer graphics cards are not expensive enough for you, now you know where to look, for now at least.
Posted by philehidiot - Wed 05 Sep 2018 12:56
If you want to play games and need to splash cash to do it, try monopoly.
Posted by LSG501 - Wed 05 Sep 2018 17:41
You know seeing things like this, and knowing how excessively high priced they are going to be, you start to understand why PC sales are dropping while things like mobile phones and tablets are increasing…. Now admittedly CPU's haven't really moved on (thanks intel) until recently (thanks AMD) but people just aren't going to upgrade when the price of a ‘high end pc’ is getting close to the price of car that's a few years old…
Posted by kalniel - Wed 05 Sep 2018 18:41

LSG501
You know seeing things like this, and knowing how excessively high priced they are going to be, you start to understand why PC sales are dropping while things like mobile phones and tablets are increasing….

Would be a fine statement.. if only gaming PC sales weren't increasing, rather than dropping, hitting an all time high in 2017 and predicted to increase a further 6% through to 2019.

kalniel
Would be a fine statement.. if only gaming PC sales weren't increasing, rather than dropping, hitting an all time high in 2017 and predicted to increase a further 6% through to 2019.

That can easily be attributed to increased prices not necessarily increased number of people buying stuff because that's a monetary value increase. You only have to look at the markup on gpu's due to crypto-mining, not to mention crypto-miners buying GPU's that could have skewed things quite heavily during that period. If it was a percentage based off of units sold I'd more inclined to change my original statement. That article was also written in 2017 BEFORE the crypto-miners moved on to using something other than gpu's.

There are also links to more recent articles showing that pc shipments have gone down again on that very page….